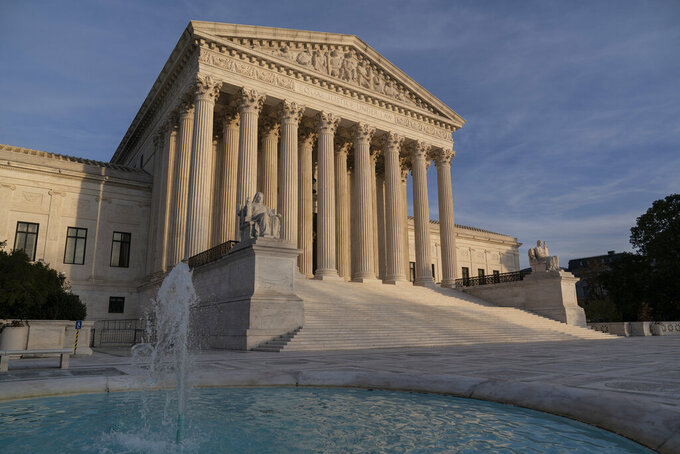 FILE - In this Nov. 5, 2020 file photo, the Supreme Court is seen in Washington. The Supreme Court will take up challenges to controversial Trump administration policies affecting family-planning clinics and immigrants, even though the Biden administration has announced it is reviewing them. (AP Photo/J. Scott Applewhite)

WASHINGTON (AP) — The Supreme Court on Monday rejected a handful of cases related to the 2020 election, including disputes from Pennsylvania that had deeply divided the justices just before the election.

Other than two Pennsylvania disputes, the justices' decision not to hear the cases was unsurprising but ends months of legal wrangling. The court had previously taken no action in those cases and in January had turned away pleas that the cases be fast-tracked, again suggesting the justices were not interested in hearing them.

Some of the justices, however, had strong feelings about the court's decision not to hear two cases from Pennsylvania that had been particularly contentious in the battleground state. The cases involved an appeal of a Pennsylvania Supreme Court decision requiring election officials to receive and count mailed-in ballots that arrived up to three days after the election. Three of the nine justices said they would have heard the case, which would not have affected the election's outcome.

Justice Clarence Thomas called the cases an “ideal opportunity” to address an important question whether state lawmakers or state courts get the last word about the manner in which federal elections are carried out. And he called it “befuddling” and “inexplicable” that his colleagues were declining to weigh in.

“We failed to settle this dispute before the election, and thus provide clear rules. Now we again fail to provide clear rules for future elections. The decision to leave election law hidden beneath a shroud of doubt is baffling. By doing nothing, we invite further confusion and erosion of voter confidence,” he wrote.

Thomas cited the expansion of mail-in voting as another reason to take the case and said “fraud is more prevalent with mail-in ballots.” Trump had made claims of massive fraud in the vastly expanded use of mailed in ballots because of the coronavirus pandemic, but courts found no evidence to substantiate those claims.

Pennsylvania lawmakers, for their part, made changes to the state's election laws in response to the pandemic but left in place a Nov. 3 deadline to receive absentee ballots. Democrats sued, and Pennsylvania’s highest court cited the ongoing coronavirus pandemic and United States Postal Service delays in extending the deadline for mailed-in ballots to be received.

Republicans had asked the U.S. Supreme Court to put that extension on hold ahead of the election. But in October, following the death of Justice Ruth Bader Ginsburg and before Justice Amy Coney Barrett was confirmed to her seat, the justices split 4-4 over doing so, keeping the three-day extension for receiving ballots in place.

In practice, however, because of the ongoing lawsuit, those late-arriving ballots were separated out and have not yet been counted. The state has said that ultimately, fewer than 10,000 ballots were received during those three days. That small number of ballots would not have altered the outcome of the presidential election in the state, which former President Donald Trump lost by some 80,000 votes.

Pennsylvania officials had argued that the case was moot because the state’s election results had already been certified. Republicans argued the justices should take the case to provide guidance for future elections. In addition to Thomas, two other justices — Samuel Alito and Neil Gorsuch — agreed.

Those three justices and Justice Brett Kavanaugh had been the four justices who previously would have put the ballot deadline extension on hold. As is typical, neither Kavanaugh nor Barrett, each of whom might have provided a fourth vote needed for the court to take the case, wrote to explain why they declined to hear the case.

“A decision in these cases would not have any implications regarding the 2020 election...But a decision would provide invaluable guidance for future elections,” Alito wrote. He said the cases “call out for review.”

Pennsylvania's Democratic governor, Tom Wolf, wrote on Twitter after the court's action: “It's time to move on.”