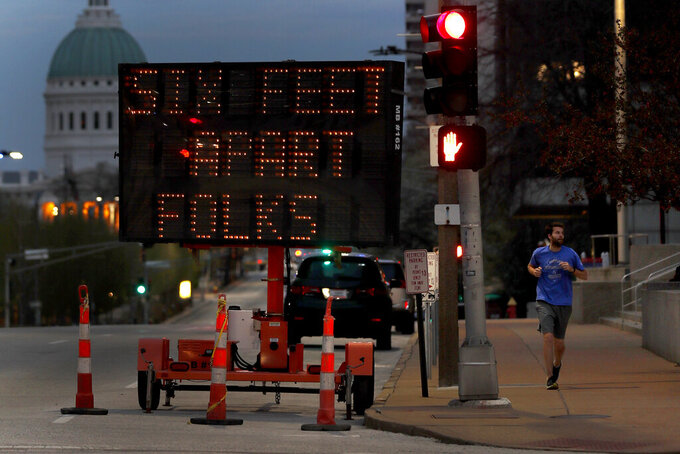 FILE - In this April 2, 2020 file photo, a person jogs past a sign encouraging social distancing, in St. Louis. St. Louis County Executive Sam Page said on Monday, Nov. 9 that unless the surge in COVID-19 cases turns around, the county will be forced to enact new restrictions starting next week. (AP Photo/Jeff Roberson, File)

O'FALLON, Mo. (AP) — Leaders of St. Louis city and county warned Monday that new restrictions may be necessary unless the coronavirus surge is brought under control soon.

St. Louis County Executive Sam Page and St. Louis Mayor Lyda Krewson, both Democrats, said in separate updates Monday that the fast-rising numbers of cases and hospitalizations are evidence that current restrictions such as mask mandates and limits on gatherings aren't working.

Page said that unless things improve, more drastic measures may be announced as early as next week for St. Louis County, Missouri's largest jurisdiction with 1 million residents.

“No one wants to shut down our economy and no one wants more restrictions,” Page said. “We understand how harmful that will be. But we can’t stand by as this virus continues to rage in our community.”

Krewson offered no specific timeline but also urged residents in St. Louis and the surrounding suburbs to wear masks, avoid large groups and maintain social distancing to slow the spread.

“I think it is fair to say that if we’re not able to make progress in getting these numbers of cases and hospitalizations heading downward, then we are looking for some additional restrictions," Krewson said. “Don’t want to do it but I have to shoot straight with you here.”

Missouri is among dozens of states seeing a big increase in COVID-19 cases and hospitalizations. After reaching new case records several times last week, culminating with a high of 4,559 on Saturday, the state health department reported better numbers Monday — 3,244 new cases and no new deaths.

It’s too early to tell if that was a one-day blip or the start of a trend.

State data showed Missouri’s positivity rate at 19.5% — nearly four times the benchmark suggested by the World Health Organization. Missouri has now reported 212,441 confirmed cases and 3,153 deaths since the start of the pandemic.

Dr. Alex Garza of the St. Louis Metropolitan Pandemic Task Force said an all-time high number of patients are being treated for the virus in the region’s hospitals -- 600 with confirmed cases and another 150 with suspected cases. With arrival of cold weather, he said, things will get worse.

“Sadly, we’re not keeping up with the pace of the virus right now,” Garza said. “Right now, really, the virus is winning.”

Neither Page nor Krewson specified what new restrictions were on the table. For now, Page urged residents to avoid personal interactions when possible; wear a mask everywhere except at home; identify a group of 10 people or fewer to come into regular contact with; and to self-quarantine for two weeks after travel or attending a larger event.

“We have one last chance to slow the cases of COVID-19 here in our community before we are forced to take action,” Page said.

As evidence that some in the community still aren’t taking the necessary precautions, Page cited a Halloween party involving up to 200 high school students. At least five have already tested positive for the virus, he said.

In Kansas City, all options “are on the table,” but the city is not currently exploring business shutdowns or a stay-at-home order, according to city spokeswoman Morgan Said.

Missouri's third- and fourth-largest cities, Springfield and Columbia, are not currently considering new restrictions, officials from those cities said.