Sustainable funds hold their own as markets tumble worldwide 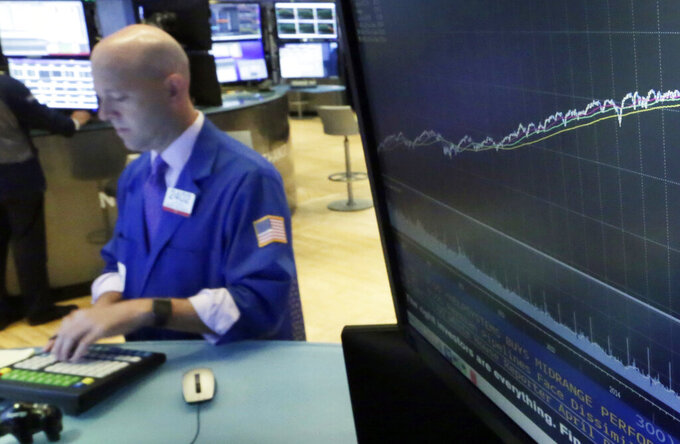 FILE- In this Aug. 22, 2018, file photo a chart on a screen on the floor of the New York Stock Exchange shows the rise of the S&P 500 index since 2009. Once derided as fads that would force investors to settle for lower returns, funds that take into account environmental, social and corporate-governance issues have held up better than traditional funds this year. It's the latest march forward for what are known as ESG funds, and the industry expects the flow of dollars to accelerate into the field. (AP Photo/Richard Drew, File)

NEW YORK (AP) — A steadier and more sustainable way to invest. That’s how a growing cadre of fund managers pitch their approach, one that considers how companies perform on environmental, social and governance issues. Maybe they're right.

Many such funds held up as well or better than their traditional rivals during the severe, sudden sell-off after the COVID-19 pandemic struck. By doing so, these funds, often called ESG investments, rewarded the investors who have been pumping record amounts of cash into the field.

It’s the latest march forward for ESG funds, which once were criticized as a fad that would force investors to settle for worse returns. More recently, they attracted a record $10.5 billion in net investment during the first three months of the year, according to Morningstar, even as markets worldwide were melting down.

“ESG funds deliver,” economists at the Institute of International Finance wrote in a recent report.

More than three quarters of ESG stock indexes have held up better than their non-ESG peers so far this year, according to the IIF. They were particularly strong during the worst of the market’s sell-off from February into March when recession worries peaked.

That dovetails with a recent Morningstar report that found ESG funds and strategies lost less money than non-ESG funds during market declines over the last one-, three- and five-year periods.

A big reason for the better relative performance recently may be that ESG funds often own fewer oil stocks than traditional funds. Energy was one of the hardest-hit areas of the market during the sell-off on worries about vanishing demand, and the price of U.S. crude oil even momentarily dropped below zero.

Consider the Parnassus Core Equity fund, which has $18.6 billion in assets and is one of the largest ESG funds. It does not own companies that get significant revenue from fossil fuels. It's lost just 1.7% so far this year, as of Tuesday, compared to the 2.1% loss for the S&P 500 over the same time, including dividends.

Over the last three years, a stretch that includes another steep sell-off at the end of 2018, the Parnassus Core Equity fund has returned a total of 39%, versus a 36.3% return for the S&P 500.

Instead of looking just at how much profit a company is likely to make or how much debt it has on its books, ESG funds also consider what a company is doing about climate change, whether it has an inclusive workplace culture and how tightly a CEO’s pay is correlated to the company’s long-term health, among other considerations.

The industry’s argument is that companies scoring poorly on environmental, social and governance issues are likely riskier investments and more prone to losses. And in investing, minimizing losses can be even more important than finding big winners.

The “E” in ESG investing often got the most attention in the past. By avoiding companies with poor track records on the environment, ESG investors were looking to minimize the risk of owning stocks that could get hit with big fines or by big regulatory decisions that could sink their profits.

This pandemic, though, is shining a brighter spotlight on how companies are doing on social and governance issues. Companies with more satisfied workforces, for example, may be better able to get quicker buy-in as they shift strategies and operations in the new normal.

The pandemic has also demonstrated in cold terms many of the shortcomings of the U.S. labor market, such as how many workers don’t have access to paid sick leave. That could set the stage for more pressure from Washington for more generous pay or benefits, which would raise labor costs for some companies. These are issues that ESG investors have already long been considering.

More recently, all the anger around the country about racism may also bring more attention to diversity among companies' workforces, executive ranks and board rooms, another longstanding issue for ESG investors.

If anything, the pandemic will likely increase the flow of dollars into ESG funds, industry analysts say. The conviction is strong enough that analysts at BofA Global Research recently upgraded their rating for Eaton Vance in part on expectations for increased flows into the Calvert family of ESG funds that it owns.

“Going forward, investors will likely have even less tolerance for bad corporate citizens — funding those businesses will become expensive and capital could prove scarce,” Michael Baldinger, head of sustainable and impact investing at UBS Asset Management wrote in a recent report.