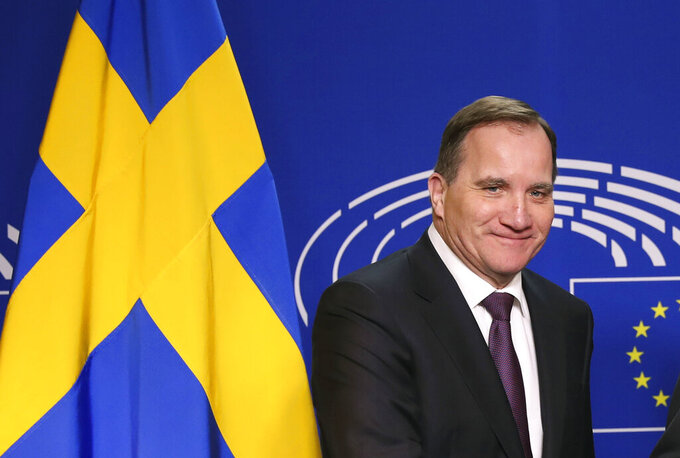 FILE - In this file photo dated Wednesday, April 3, 2019, Sweden's Prime Minister Stefan Lofven, before a meeting at the European Parliament in Brussels. Sweden’s lawmakers have held a memorial service for the more than 5,000 people who died of COVID-19, Wednesday June 17, 2020, and the Riksdag parliament stood to observe a minute of silence, while Prime Minister Stefan Lofven said Tuesday he thought it was “a little strange” that fellow Nordic nations haven't reopened their borders to Swedes. (AP Photo/Francisco Seco, FILE)

STOCKHOLM (AP) — Flags flew at half-staff in front of Sweden’s parliament as lawmakers inside held a memorial service Wednesday for the more than 5,000 people with COVID-19 who have died in a country that declined to implement the strict lockdown measures widely adopted in Europe.

Members of the 349-seat Riksdag stood up to observe a minute of silence during the 15-minute memorial. The Swedish government steadfastly defends its soft approach to controlling the spread of the coronavirus despite growing criticism from opposition parties.

“This particular moment is for all of them: those who lost their jobs, their health, their lives,” Riksdag Speaker Andreas Norlen said. “We say to all those who now mourn and suffer: You are not alone.”

Sweden has the most virus-related deaths in the Nordic region, with 5,041 reported as of Wednesday. However, the number of COVID-19 deaths recorded daily has declined, and weekly statistics show that mortality is now close to normal for this time of year after peaking in April.

A number of European countries have maintained travel restrictions on visitors from Sweden because of the country’s rate of new confirmed cases. Prime Minister Stefan Lofven said Tuesday he thought it was “a little strange” that fellow Nordic nations — Denmark, Norway, Iceland and Finland — haven't reopened their borders to Swedes.

“I have to respect what other countries decide,” Lofven said in an interview with Swedish newspaper Expressen in which he noted that the number of virus-related deaths in Sweden “is going down considerably now.”

Denmark, Norway and Finland have in recent weeks allowed each other's residents to enter their countries.

But travel restrictions to neighboring Denmark and Norway remain in place, Linde said. She said restrictions on countries outside Europe will be extended until Aug. 31.

Lofven's government never imposed a lockdown or ordered business to close. Large gatherings were banned, but restaurants and schools for young children have stayed open. The government urged social distancing, and Swedes have largely complied.

During the last week, the country has seen a steep climb in new cases, which the government and the health authority have attributed to a big increase in testing.