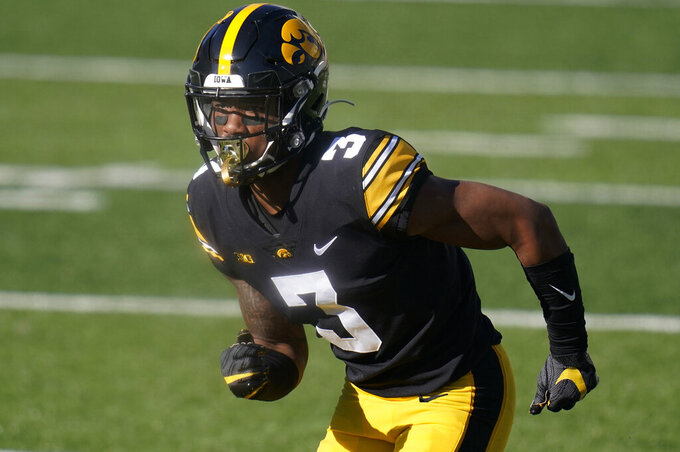 FILE - In this Saturday, Nov. 7, 2020 file photo, Iowa wide receiver Tyrone Tracy Jr. runs on the field during an NCAA college football game against Michigan State in Iowa City, Iowa. It was back in the 2019 season when Tyrone Tracy Jr., gave himself the nickname “Sweet Feet.” Never mind that Tracy was just a redshirt freshman in Iowa’s experienced wide receiver group. He came up with it, he said that season, so it was his. Two years later, he said he’s keeping it.(AP Photo/Charlie Neibergall, File)

It was a bold move by the redshirt freshman in Iowa’s experienced wide receiver group.

“I started it,” Tracy said with a smile. “So I think I still own the name.”

Iowa’s receiver group isn’t nearly as experienced as the last few seasons. Now, Tracy is older and embracing being one of the louder voices.

“They respect me in the room,” Tracy said Tuesday. “I do think I have some weight in the room. When I do say something, stuff happens. I’m excited to lead us, to see where we go.”

His role expanded when Brandon Smith went out with an ankle injury. Tracy became a big-play receiver. He had a 75-yard catch-and-run for a touchdown against Wisconsin, and he had a 23-yard rushing touchdown in the Hawkeyes’ Holiday Bowl win over Southern California.

But Tracy had just 14 catches for 154 yards and one touchdown in the pandemic-shortened 2020 season. Smith and Ihmir Smith-Marsette were the main targets for quarterback Spencer Petras, combining for 48 catches for 576 yards and six touchdowns. Tight end Sam LaPorta led the Hawkeyes with 27 receptions.

“I felt like my role was behind Ihmir and B-Smith, if I’m being honest,” Tracy said. “This year, I’m kind of in the forefront of getting the ball in stuff. I’m excited about that.”

Iowa’s offense progressed in Petras' first season as the starter. The Hawkeyes lost their first two games and won their last six.

“We basically went straight into games,” Tracy said. “All the reps, all the chemistry, was gone. We had to build that. I feel like from here on, if we can keep moving, we’ll keep getting better.”

There will be adjustments to Iowa’s passing game. Smith and Smith-Marsette are gone, leaving Tracy and Nico Ragaini to lead a wide receiver group that also includes seniors Charlie Jones and Max Cooper. Jones did not have a reception last season, although he was the Hawkeyes’ punt returner. Cooper missed the season with an injury.

Those four are joined by true freshman Arland Bruce and Keagan Johnson, who went through spring practice.

“I definitely think we have the best opportunity to be a great offense,” Tracy said. “I think last year we were still young. I think right now we have players who have been playing. We have some players who have had experience of being on the field. Coming back, we should be very good.

“I think we’re capable of some explosive stuff. But we have to display it on Saturdays.”

Iowa has had four 1,000-yard receivers in a single season. Tracy said he wants to join that list.

“I want to be the best wide receiver in the Big Ten,” he said. “I feel like to get there, I have to have a good offense. And I think I have that. Right now, we’re just talking. We eventually have to go out to play.”