Swimming warmup at Olympics can be a chaotic 'nightmare' 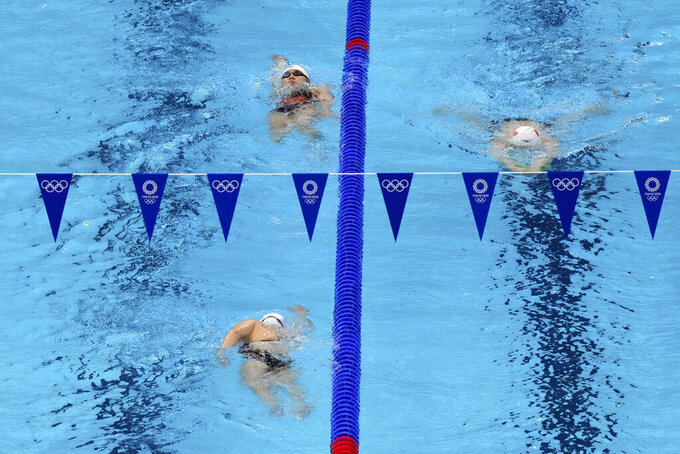 FILE - In this July 21, 2021, file photo, Athletes exercise during a swimming training session at the Tokyo Aquatics Centre at the 2020 Summer Olympics in Tokyo, Japan. With hundreds of swimmers scrambling to get their warmup done at the same time, multiple athletes in each lane, everyone diving over one another and some competitors using snorkels, kickboards and other paraphernalia, warmup is organized chaos. (AP Photo/Matthias Schrader, File)

TOKYO (AP) — Cate Campbell was a 17-year-old swimming phenomenon when she learned the dangers of warmup at major competitions the hard way.

That’s what a head-on collision with Michael Phelps will do for you.

“He was doing a sprint butterfly down the wrong side of the lane. Straight into me doing backstroke,” Campbell recalled about the incident at the 2009 world championships in Rome. “There was a lot of velocity and power in that. He swims really fast, apparently.”

Campbell came away with three vertebrae compacted in her neck — which was rendered practically immobile — and a big lump on her head.

Now entering her fourth Olympics with five medals to her name, Campbell knows the most important rule of warmup.

“Everyone for themselves,” she said in a recent interview. “Sometimes it is honestly a nightmare. … You’re touching the people in front of you, their feet, and someone’s touching your feet. Everyone’s swimming over the breaststrokers, who are a real hazard.”

With hundreds of swimmers scrambling to get their warmup done at the same time, multiple athletes in each lane, everyone diving over one another and some competitors using snorkels, kickboards and other paraphernalia, warmup is organized chaos.

It’s swimming’s version of Shibuya Crossing, the famous Tokyo intersection where thousands of people hurry every which way at once.

Amid a pandemic, warmup could be considered a health hazard.

“At this point, we’ve gotten comfortable being in a large crowd,” said American swimmer Zach Harting, who will race the 200-meter butterfly. “I’m vaccinated so that provides a little bit of comfort there. I’m not worried about it. It’ll be fun. If not, we’ll leave. That’s my motto.”

While it’s not a rule that’s strictly enforced, swimming governing body FINA suggests that only the athletes competing each morning or evening warm up in the competition pool in the 90 minutes before each session. Other swimmers can go to a nearby warmup pool — which is usually just as chaotic.

In Saturday’s opening swimming session, there are 26 different heats in six different events, including the women’s 4x100-meter freestyle relay. That could amount to nearly 300 swimmers warming up at once.

Overall, there are nearly 1,000 swimmers at the Tokyo Games from nearly 200 countries.

“You can’t be telling people that they can’t warm up,” said Bronte Campbell, Cate’s younger sister and a member of Australia’s heavily favored 4x100 free relay team, which will be aiming for its third consecutive gold medal in Monday’s final.

“They’re going to do their best to keep everyone safe and we all want to keep each other safe,” Bronte Campbell added. “But the warmup pool is going to be a very interesting space this time around.”

The warmup pool was also in the spotlight at the 2015 world championships in Kazan, Russia, when Sun Yang of China got into a confrontation with a female Brazilian swimmer then failed to show up for the 1,500 free final as reigning champion.

“It’s quite chaotic,” said Chad le Clos, a four-time Olympic medalist from South Africa. “I’ve been jumped on a few times. I’ve jumped on people a few times. Because obviously the first lane is the diving lane. But sometimes if people go quickly under the lane you don’t see it.”

Problems arise depending on which side of the lane is used for which direction.

“It depends who jumps in first — they choose the circles and then it just stays like that. At the Commonwealth Games you go on the left,” Le Clos said.

In most of the world, though, swimmers stay to the right.

And while Australians stay left at home, they fall in line with the rest of the world at major meets, the Campbells said.