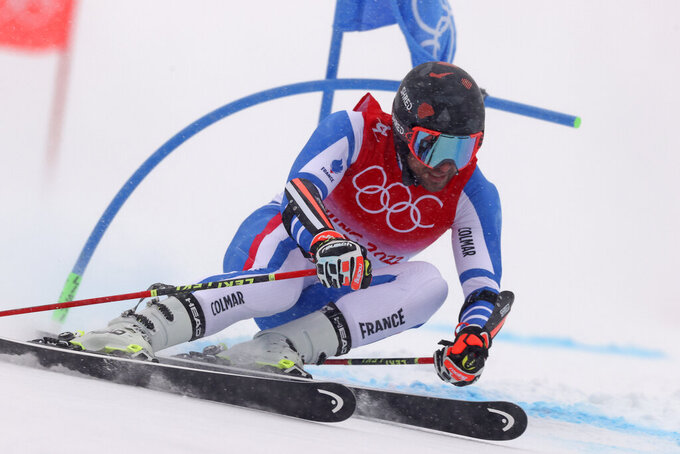 Mathieu Faivre, of France passes a gate during the second run of the men's giant slalom at the 2022 Winter Olympics, Sunday, Feb. 13, 2022, in the Yanqing district of Beijing. (AP Photo/Alessandro Trovati)

BEIJING (AP) — Blizzard conditions that made visibility nearly impossible. Overwhelming expectations. An early error that would have thrown a lesser skier off course. Then a 75-minute delay while he was holding the lead midway through the Olympic giant slalom.

Marco Odermatt dealt with all that and more en route to a hard-earned gold medal on Sunday at the Beijing Games that cemented his status as The Next Big Thing in Alpine skiing.

The overall World Cup leader from Switzerland added to his first-run lead and beat Zan Kranjec of Slovenia by 0.19 seconds.

“It was a hard day, with the conditions, with such a long wait between the two runs,” Odermatt said. "It was more than five hours for me. It was such a long time to re-think everything and it was hard to stay focused. I tried to sleep some minutes in between.”

Odermatt has dominated in the giant slalom this season, winning four of the five races on the World Cup circuit to lead the discipline standings.

Yet 15 seconds into the race, Odermatt got pushed low and off the racing line and appeared like he might be about to do what Mikaela Shiffrin did in the women’s technical events when she fell early in both giant slalom and slalom.

But Odermatt dug his edges in and used his power to recover in time to clear the next gate. The mistake meant that Odermatt lost more than half a second from one checkpoint to the next but he appeared unfazed and kept charging.

“He almost did what I did in the pitch in the first run,” said Norwegian racer Henrik Kristoffersen, the silver medalist four years ago who finished eighth with a similar mistake. “But he’s so in the flow that it doesn’t really matter that much. He can kind of catch it back. When you’re in this flow, you can do that."

Until this race, all of the events at the Yanqing Alpine Skiing Center had been contested on artificial snow. But the real stuff finally came down on a course known as The Ice River, creating treacherous conditions — and conditions that none of the skiers had prepared for.

So how nervous was Odermatt about dealing with the conditions, the delay and the expectations?

The snow picked up again right when Odermatt was starting his second run and he was losing time from one checkpoint to the next — his lead over eventual silver medalist Kranjec was 0.78 seconds at the start, then cut to 0.63, then 0.43, then a mere 0.15 at the final checkpoint. If the trend held, Odermatt seemed destined for bronze.

Somehow, though, Odermatt mustered forth some extra energy and started gaining time just when it counted most — over the final gates.

At the finish, Odermatt roared in celebration like his favorite animal, a lion — a design of which was printed on his silver-colored helmet.

“I really risked everything in the second run because I wanted not just the medal, I wanted the gold medal,” Odermatt said. ”It’s difficult, because you can lose everything, but today it paid off.”

So what makes Odermatt so skilled?

“His ability to adapt,” said Lucas Braathen, a Norwegian who failed to finish the second run.

Braathen mentioned how different the conditions are in China from Europe.

“You have everything from aggressive to pure ice, shaky, salty, whatever. He’ll adapt,” Braathen said. “It doesn’t matter the conditions and visibility. I admire him for that. That’s a place I want to end up myself in GS one day.”

While Radamus won three golds at the 2016 Youth Olympics and four more medals — including two titles — at the world junior championships, he has never cracked the top five in a World Cup race.

Still, finishing one spot down from the medal places hurt.

“It’s tough to swallow right now but I know in my heart that I did everything I could to prepare for today,” said Radamus, who had his hair designed like a tiger print. "I could’ve hoped for more, but I’m really proud of my work today and all season and I’ll take pride in my result.”