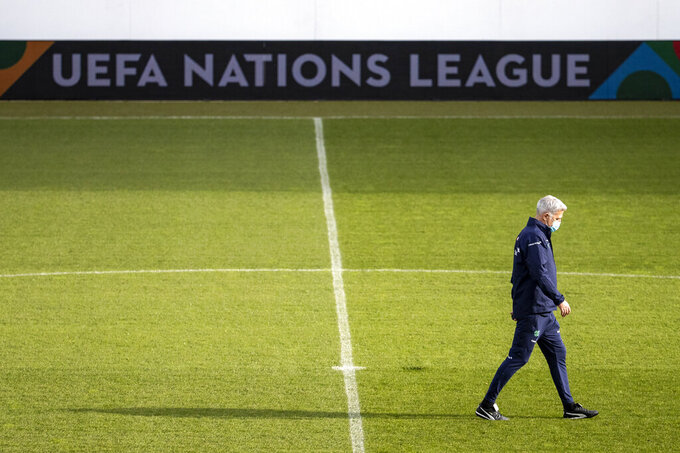 Switzerland's head coach Vladimir Petkovic during a training session of the national soccer team of Switzerland, one day before the UEFA Nations League soccer match between Switzerland and Ukraine at the Swissporarena in Lucerne, Switzerland, on Monday, Nov. 16, 2020. (Alexandra Wey/Keystone via AP)

LUCERNE, Switzerland (AP) — Ukraine's Nations League game against Switzerland was canceled hours before the scheduled kickoff on Tuesday after six of its players tested positive for COVID-19.

The Ukraine soccer federation said in a statement the game could not take place after health officials in the Swiss canton (state) of Lucerne put its entire squad into quarantine.

Six Ukraine players and one staff member tested positive for COVID-19 in Switzerland as part of mandatory pre-game screening before UEFA-organized games.

“The Ukrainian football association confirmed they have no other team, i.e. eligible players, able to play the match, either today or tomorrow,” UEFA said Tuesday.

UEFA refers canceled games to its disciplinary panel for a verdict. It can order Ukraine to forfeit the game as part of emergency competition rules during the coronavirus pandemic.

Those rules require national teams to play if they have 13 eligible players, including one specialist goalkeeper, on site who are not isolating in quarantine and have tested negative.

It is the second Nations League cancellation in the current international break due to public restrictions to control the pandemic. Norway was unable to send a team to fulfill a fixture in Romania on Sunday.

The match Tuesday was to have decided which of Switzerland or Ukraine is relegated to the Nations League second tier from a group that also includes Germany and Spain.

Ukrainian team officials had suggested two of the six players in question should have been given UEFA clearance to play. The federation said Sergei Kryvtsov and Junior Moraes had antibodies after previously testing positive for COVID-19 while on Champions League duty with Shakhtar Donetsk.