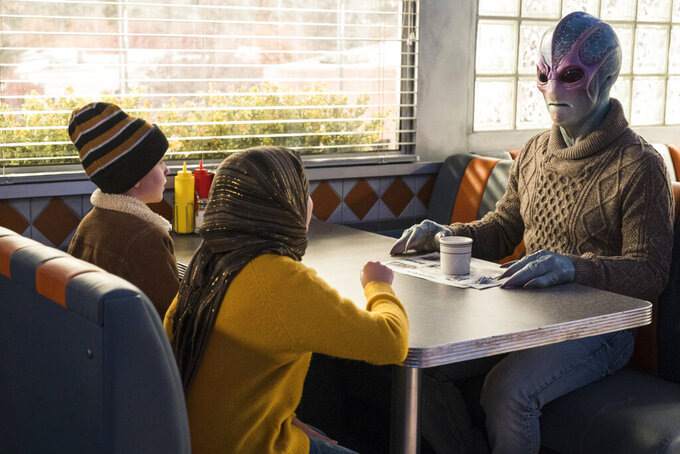 “It’s been a while since there’s been a cable show, a basic cable show on USA or Syfy or another one of those channels, that’s struck me as something I would go back and give another look,” Owen, a Pittsburgh Tribune-Review columnist, said of the comic book-inspired series that arrived in January.

An hour-long dramedy about an extraterrestrial being stuck in a small town, “Resident Alien” gained early traction in the ratings. It pulled in a bigger audience for its second episode than its first, a rarity in the peak-TV era of dizzying decisions about what’s worth your time and money.

The numbers are on a modest scale but with promise enough to gladden the heart of Syfy's parent company, NBCUniversal, which gave the series a robust blastoff that included a NBC network promotional spot starring a UFO.

“We launch shows all the time and we want to pretend that every show can be the next big hit,” said NBCUniversal executive Jeff Bader, who heads its TV programming strategy group. “But it's actually rare that you have a show that people seem to respond to ... and this is one of those shows.”

A key element: Alan Tudyk's deftly layered comic performance as stranded alien Capt. Ha Re, who takes a crash course in human conduct and speech from “Law & Order” reruns. His otherworldly appearance is mostly cloaked with the appearance of an Earthling he killed, the memorably named Dr. Harry Vanderspeigle.

Series creator Chris Sheridan gladly raves about Tudyk's work, but he was determined that the quirky residents of fictional Patience, Colorado, be as compelling as the alien in their midst. The cast includes Sara Tomko (“Sneaky Pete”) as Asta Twelvetrees, assistant to Vanderspeigle; Corey Reynolds (“Selma”) as town sheriff Mike Thompson, and Judah Prehn as Max, the boy who sees Harry as the menacing interloper he is. (Spoiler alert: Ha Re's mission is to wipe out humans.)

“If the alien never showed in Patience, there was enough going on in town and the characters are three-dimensional enough that people would want to watch it,” Sheridan said. “Then if you take that and drop this alien layer over the top of it you have something real that the alien is observing.”

Superficially, “it looks like it’s just a show about an alien coming down and trying to destroy people,” he said. “But when you really follow it, it becomes a show about unity and how humans are stronger when they work together, and how connected we all are.”

Such “Blue-Sky DNA” largely vanished from basic cable as it gravitated toward darker dramas, Owen said, with “Mr. Robot” an example of subsequent efforts to compete in a TV world flooded by edgy fare on streaming platforms.

So how can a series on a niche channel like Syfy compete? With the heft of Comcast-subsidiary NBCUniversal behind it. The creative strengths of “Resident Alien” aside, its promising start demonstrates that even the right series at the right time benefits from a juggernaut promotional and scheduling effort.

Pre-pandemic, the series enjoyed a fall 2019 preview at New York Comic Con, an early-bird approach to stoking enthusiasm employed by other movie and TV projects. In January, NFL Sports was enlisted to air a series trailer during the Baltimore-Buffalo NFL playoff game. Preceding the clip: a narrator announcement of a “special flyover” — not by a Stealth jet, but a visual effects-generated UFO swooping over Bills Stadium.

Then came repeated airings of the pilot, including a whopping 10 times on Syfy and a simulcast on USA, and showings on NBCUniversal’s E! and Bravo channels to introduce the series to different TV audiences.

In ratings for the first two episodes of “Resident Alien” in their initial Syfy airings combined with the next three days — an extended window that media companies say more accurately reflects today's on-demand viewing — the second episode drew 581,000 more viewers than the first (2.765 million vs. 2.184 million). That's the biggest week-over-week increase for a cable or broadcast drama debut since “Outlander” in 2014.

With the sci-fi genre a growing part of all TV platforms (“The Mandalorian” on Disney+ among the examples), could that be a key part of the appeal?

“I think that contributes," Bader said. "But there’s something different with this show, because Syfy has launched other genre shows that have not launched like this. So there’s just something in this that people are liking.”