Take me out to the ballgame? Yes. The crowd? Not just yet. 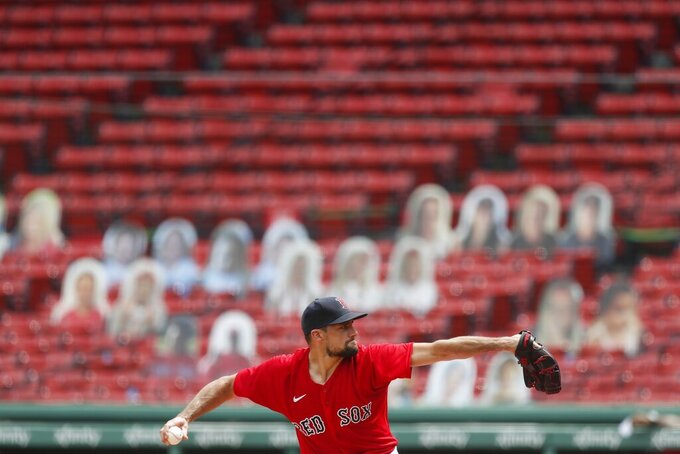 FILE - In this Aug. 9, 2020, file photo, Boston Red Sox starting pitcher Nathan Eovaldi delivers in front of empty stands during the first inning of a baseball game against the Toronto Blue Jays in Boston during the COVID-19 pandemic. The Red Sox announced Thursday, Feb. 25, 2021, that the team is making plans for a limited number of fans to return to Fenway Park for the regular season. (AP Photo/Michael Dwyer, File)

Boston sports teams are preparing for a limited number of fans to return to games starting next month, and things are going to be different. Gov. Charlie Baker announced on Thursday that Fenway Park, TD Garden and Gillette Stadium can open up to 12% of capacity starting March 22 — allowing fans to see professional sporting events in person in the state for the first time in more than a year.

“I'm sure there will be a big American flag hanging off the Green Monster in left field” on opening day at Fenway Park, Baker said during a news conference in Salem. “Beyond that, I don’t have any idea.”

The Red Sox played a shortened season last year in an empty ballpark, with Major League Baseball opening to fans only in a limited capacity for the playoffs. The Bruins and Celtics shut down when the pandemic hit the U.S. in March and resumed over the summer in remote bubbles established by their leagues. The Patriots also played in an empty stadium at home, though a few road games did have limited capacity.

The Bruins and Celtics started their 2020-21 seasons months late and without fans. Now, as Baker moves the state into Phase IV of the coronavirus reopening plan, the teams are getting ready to reopen.

TD Garden could have about 2,000 in attendance for NHL and NBA games, and the Red Sox could be open for about 4,500 fans at Fenway. All three teams put out statements stressing that they can host fans safely.

“An incredible amount of work and collaboration has taken place over the past year in preparation for the return of fans to TD Garden,” Bruins President Cam Neely said in a statement that detailed the plans.

“The processes and protocols that have been put in place are structured to ensure the safety, well being and enjoyment of our fans. We are beyond excited to welcome back the best fans in hockey to TD Garden as their energy and enthusiasm have been greatly missed.”

The Bruins were scheduled to play in front of a crowd for the first time in almost a year on Friday night when Madison Square Garden opens to fans for Boston's game against the New York Rangers. Capacity will be limited to 10% of normal, or about 1,800 fans.

Bruins coach Bruce Cassidy said it will be a different kind of strange.

“When the building is empty you’ve come to accept that it’s empty,” he said. “Now you sprinkle a few people in, will it be more weird because you’re used to a full building?”

But having any fans back is a good step, he said.

“That part of it, yes, is a positive,” he said. “And I would like it to happen all over, if possible.”

Red Sox manager Alex Cora will also be glad to say goodbye to empty ballparks when the team opens at Fenway on April 1. Among other things, players' families will be able to see them play in person for the first time since 2019.

“It was weird, and obviously where we are at with the virus, to have fans is great,” he said. “Things are trending in the right direction. ... And then, hopefully, whenever we can, we’re going to have a packed house. And that’s going to be really, really special.”

Complicating the reopening plans is the fact that Gillette Stadium and Fenway Park are being used as mass vaccination sites. Baker said he did not know what would happen when the venues return to their regular purposes.

The Red Sox said they will continue to provide space for vaccinations.

“The Red Sox are fully committed to supporting the state’s vaccination program and expect Fenway Park to continue to operate as a mass vaccination site beyond the start of the regular season,” the team said in a statement.