Takeaways: Barrett is reticent as Dems focus on health care 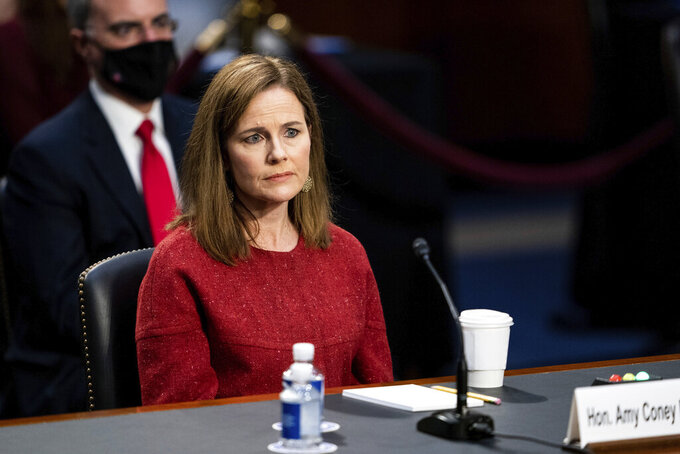 WASHINGTON (AP) — Supreme Court nominee Amy Coney Barrett faced her first day’s worth of questions Tuesday from the Senate Judiciary Committee, and it was a calmer affair than other recent confirmation hearings that featured Democratic procedural delays and interruptions from protesters.

With public attendance limited by the coronavirus pandemic and Democrats staying focused on a health care message just three weeks ahead of the Nov. 3 presidential election, the back and forth was serious, disciplined and mostly uninterrupted — save a few technical glitches from those participating virtually.

But similar to past hearings, Barrett avoided taking positions on a variety of subjects and rulings, saying it would be inappropriate to do so.

Takeaways from day two of the confirmation hearing:

DEMURRING ON HER VIEWS

Barrett repeatedly declined to give her personal views, or to preview how she might rule, on key issues that could become before the court. Like other Supreme Court nominees before her, she said she was prohibited from expressing those opinions by the “canons of judicial conduct.”

Among the issues she declined to weigh in on was the upcoming election. Barrett said she could not give an opinion on whether she would recuse herself from any election-related litigation involving President Donald Trump, who said as he nominated her that he wanted the full nine justices in place ahead of any possible election decisions. Barrett also said she could not answer whether Trump has the power to delay the general election, an idea the president floated earlier this year.

Trump does not have the authority to unilaterally change the date of the election — Article II of the Constitution gives Congress that power.

The Indiana judge, a faithful Catholic, also declined to say whether she believes Roe v. Wade, the 1973 decision that established the right to abortion, should be struck down. She said she did not want to join the court with an “agenda” on the subject, only to “stick to the rule of law and decide cases as they come.”

California Sen. Dianne Feinstein, the top Democrat on the panel, told Barrett that it was “distressing to not get a straight answer” to her question.

Even though other recent nominees have similarly declined to elaborate on their views, Barrett has publicly identified herself as an abortion opponent, signing at least three public letters and joining a Faculty for Life group at the University of Notre Dame.

Barrett also declined to give her personal views on the Supreme Court’s decision to legalize gay marriage or whether the Affordable Care Act should be overturned, the subject of a November hearing.

Barrett acknowledged her strong Catholic faith while also saying she will put her beliefs aside when ruling if she’s confirmed. She said she has done that already in her current post as a federal appeals court judge.

In a series of questions from Senate Judiciary Committee Chairman Lindsey Graham, Barrett said her faith means a lot to her personally and that she has chosen to raise her children in the church.

Republicans have sought to use Barrett’s faith to attack Democrats ahead of the presidential election. They point to Feinstein’s questioning of Barrett at her 2017 confirmation hearing, when the senator told the then-law professor that she believed “the dogma lives loudly within you.” Since Barrett was nominated to the Supreme Court, Republicans have mounted an all-out defense of her Catholicism and repeatedly said they expect Democrats to attack it.

Democrats say they have no interest in revisiting that issue during this confirmation process. None of them have yet asked about her faith, and most Democratic members of the committee have said they believe it’s an inappropriate line of questioning.

Democrats appear to have settled, at least for now, on a different approach from the confirmation hearings for Supreme Court Justice Brett Kavanaugh, when they used procedural tactics to disrupt and delay the process.

As with Kavanaugh, Democrats do not have enough votes to block Barrett’s confirmation on their own. But they say they want to make their case to the American people ahead of the presidential election.

This time, Democrats have focused on the effects on “real people” if the Affordable Care Act is overturned by the high court. Using poster boards with pictures and telling stories of their constituents, they said they are trying to make the hearings more understandable to the general public by highlighting the benefits of the health care law, trying to portray Barrett as extreme and criticizing the rushed GOP process to confirm her before the election.

Graham acknowledged the different tone during Tuesday's session, noting that there were “a lot of good questions, good interchange, not one time has a senator and the judge talked over each other. I hope the American people understand that this is the way it should be."

Barrett said she accepted Trump’s nomination because she is “committed to the rule of law” and the role of the Supreme Court. But she said the process has been difficult for her and her family.

She said she has been on a “media blackout for the sake of my mental health,” though it’s impossible to stay completely walled off.

“I don’t think it’s any secret to any of you or to the American people that this is a really difficult, some might say excruciating, process, and Jesse and I had a very brief amount of time to make a decision with momentous consequences for our family," she said, referring to her husband.

Barrett said they knew "that our lives would be combed over for any negative detail. We knew that our faith would be caricatured. We knew our family would be attacked. And so we had to decide whether those difficulties would be worth it."

She said she realized that it would be a difficult road for any nominee, and “if the difficulty is the only reason to say no, I should serve my country.”

Republican Sens. Thom Tillis of North Carolina and Ted Cruz of Texas returned to the Senate on Tuesday after absences related to coronavirus. Tillis tested positive Oct. 2, and Cruz was in a self-imposed quarantine after contact with Republican Sen. Mike Lee of Utah, another committee member who tested positive earlier this month. Lee returned to the Senate on Monday.

At least two members of the committee appeared virtually — Democratic Sens. Patrick Leahy of Vermont and Kamala Harris of California, who is her party's vice presidential nominee. Both said they would not attend in person because other committee members had tested positive after attending a White House event.

“I’ve stayed away simply because I don’t think it is safe for you or anybody else to be there,” Leahy told Barrett after technical difficulties with the volume of his video feed.

Tillis disagreed, saying later in the hearing that he considers the Senate an essential business, and “I would encourage anybody who works in the Senate to come to work.”