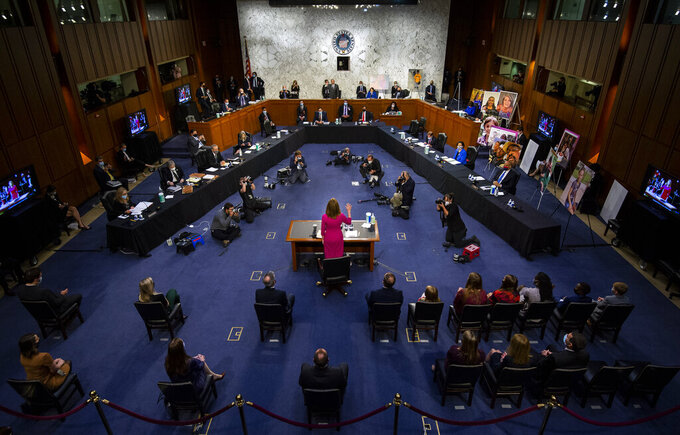 Supreme Court nominee Amy Coney Barrett is sworn in during a confirmation hearing before the Senate Judiciary Committee, Monday, Oct. 12, 2020, on Capitol Hill in Washington. (Kevin Dietsch/Pool via AP)

WASHINGTON (AP) — The coronavirus won't surrender the national stage to anyone — not to President Donald Trump, Judge Amy Coney Barrett or majority Republicans holding the power to confirm nominees to the Supreme Court.

The disease that's killed more than 213,000 people in the United States dominated the Senate hearings that opened Monday in Washington. From the start, Republicans on the Judiciary Committee were on the defensive about rushing Barrett's confirmation before the Nov. 3 election. Yet they appeared to have enough votes to elevate Barrett to the high court.

Here are some takeaways from the first of four days of Barrett's confirmation hearings.

Other than Trump, no one has more riding on the success of the hearings than their chairman, Sen. Lindsey Graham. And it seemed he felt he had some explaining to do about why he was holding the hearings during the pandemic.

The South Carolina Republican is in the reelection race of his life against Democrat Jaime Harrison, who has shattered fundraising records. Graham has linked himself to Trump after years of mocking the president. And he said in the past that he would not consider Supreme Court nominations in presidential election years.

Yet there he was, gavel in hand, refusing to get tested just beforehand or to enforce a mask-wearing rule for those in the cavernous hearing room. Trump and a circle of supporters who attended a recent Rose Garden ceremony for Barrett had been infected. At least two members of Graham's committee, Sens. Thom Tillis and Mike Lee, have also tested positive.

Tillis participated remotely. Lee attended the hearing and did not always wear a mask, but provided a doctor's note clearing him to participate.

Graham, who did not wear a mask at his seat, said he tested negative on Oct. 2 after “brief contact” with Lee. He displayed documents he said attested to the safety of the hearing room setup.

“You make it as safe as possible, you manage the risk and you go to work” like millions of Americans, Graham said. “I'm not going to be told to be tested by political opponents.”

Republicans — not Democrats — opened the hearing by making Barrett’s Catholicism an issue.

One by one, GOP committee members used their time to make opening statements to predict that the panel’s Democrats would overstep on the issue.

The Republican strategy was rooted in Barrett’s 2017 confirmation hearing for an appeals court judgeship, when Sen. Dianne Feinstein, D-Calif., told Barrett that “the dogma lives loudly within you.” But as this week’s hearing opened, Democrats stuck to their plan to make the confirmation battle about health care and Roe vs. Wade, not Barrett’s religious beliefs.

That did not stop Republicans from decrying what they called religious bias by Democrats.

Iowa Republican Joni Ernst, who is facing an unexpectedly tough reelection fight, suggested that critics would cast Barrett as a “TV or cartoon version of a religious radical.”

Texas Sen. John Cornyn and Missouri Sen. Josh Hawley were among the Republicans warning that the Constitution bars religious tests for public office. Hawley criticized Democratic vice presidential nominee Sen. Kamala Harris of California for asking past judicial nominees about their membership in the Knights of Columbus, a lay Catholic fraternal organization.

Harris said last week that she and Democratic presidential nominee Joe Biden “are both people of faith, and it’s insulting to suggest that we would knock anyone for their faith.” Biden, who is Catholic, said Monday that Barrett’s faith “should not be considered” and urged a focus on her approach to a pending high court challenge to the Affordable Care Act.

Committee Democrats, with virtually no power to stop Barrett's confirmation, did some subject-changing of their own.

“Why are we here?” said Sen. Chris Coons, D-Del. “It's because the Affordable Care Act is on the ballot and on the docket.”

They consistently linked the nomination to the coronavirus pandemic, criticizing the safety precautions taken by Republicans and noting that the court, with Barrett on it, could rule to remove health care protections.

Sen. Sheldon Whitehouse, D-R.I., called the hearing an “irresponsible botch” because of the lack of contract tracing after the two Republicans on the panel tested positive for the virus. “The irony is that this slapdash hearing targets the Affordable Care Act,” he said.

Sen. Patrick Leahy of Vermont said the Senate “is wearing blinders to the grim realities facing Americans.” New Jersey Sen. Cory Booker said that “instead of doing anything to help people who are struggling right now, we are here.”

Democrats also told their own personal stories. Minnesota Sen. Amy Klobuchar talked about her husband and her father’s bouts with coronavirus. Sen. Mazie Hirono of Hawaii spoke of her own cancer battle.

Hirono noted that Graham had been compassionate to her during her health struggles. She said this could be a “moment” for Graham to show the same compassion to “the American people terrified about losing their health care.”

THE RACE FOR PRESIDENT

Among the first cases confronting Barrett on the Supreme Court could be a challenge to the presidential election.

Democrats warn that President Donald Trump wants his nominee in place to help resolve any election disputes. Some are saying she must recuse herself from any such cases.

Blumenthal told Barrett her participation in election cases would do “explosive, enduring harm to the court’s legitimacy and your own credibility.”

He said, “You must recuse yourself.”

Trump has suggested he might not abide by the results of the election or the nation’s tradition of a peaceful transfer of presidential power if he is defeated by Democrat Joe Biden.

The president has repeatedly questioned the validity of mail-in ballots, even though election experts say fraud is so minimal there’s a greater chance of being struck by lightning. Vote by mail is surging as voters avoid polling places during the COVID-19 crisis.

Republicans have sought to tamp down on voting concerns, offering assurances that the ballots are legitimate and that the results will be honored, whichever party wins the presidency.

There’s a high chance the results will not be known on Election Day as states take extra time to tally all the ballots.

Sen. Richard Durbin, D-Ill., said Trump has “made it clear” he wants another of his appointees on the court as he anticipates court challenges to the vote.