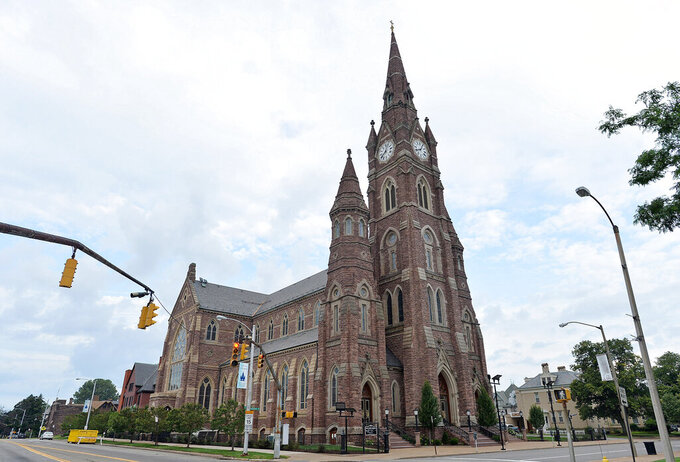 This Aug. 8, 2018 photo shows St. Peter Cathedral in Erie, Pa., the home parish for the Catholic Diocese of Erie. In mid-March 2020, the diocese closed its churches as the coronavirus spread, limiting its access to weekly donors, and applied for funds from the Paycheck Protection Program. It also decided to withhold payments from its victim-compensation program, saying its bank had decreased a line of credit. (Christopher Millette/Erie Times-News via AP)

One centerpiece was the $659 billion Paycheck Protection Program. Congress created the program to help smaller businesses and nonprofit groups -- generally those with fewer than 500 employees -- keep their workers on the payroll.

An Associated Press analysis has found that a special exemption to the 500-employee cap set the stage for approval of at least $1.4 billion for groups affiliated with the Roman Catholic Church, making it one of the program’s big winners. Many of those millions are going to pay salaries and other expenses in dioceses that recently paid huge financial settlements to victims of clergy sexual abuse.

Key takeaways from the AP’s analysis:

Lobbied by religious leaders, the Trump administration went one step further by granting all faith groups a special waiver to the 500-employee cap. For the Catholic Church, that meant instead of all churches, schools, and other organizations in a diocese grouping their employees into a single total -- making many ineligible due to their size -- each could apply as an independent, “small” entity.

As a result, AP found, at least 3,500 Catholic organizations qualified for loans that the government will forgive if recipients spend the money on payroll, rent, and utilities. Loans to Catholic entities that AP identified were worth at least $1.4 billion -- and as much as $3.5 billion.

That is certainly an undercount: A Catholic financial officers’ organization says a survey of its members tallied approximately 9,000 Catholic-affiliated recipients.

Initially, faith groups had limited eligibility under the law Congress passed. They were still subject to the “affiliation rule,” which meant only dioceses or other Catholic organizations with fewer than 500 people employed across often-vast territories could apply.

That rule was changed after lobbying by religious groups including the United States Conference of Catholic Bishops and the Archdiocese of Los Angeles, whose leader is the president of the conference. The Catholic News Service reported that the bishops' conference and several major Catholic nonprofit agencies worked the week of March 30 to ensure that religious groups would not be limited.

In a written statement, bishops’ conference spokesperson Chieko Noguchi said including faith groups was a matter of fairness. She also acknowledged lobbying by the conference, which she said, “regularly works with Congress and the administration on legislation and regulations of concern to the bishops, including the emergency relief that is being provided during the pandemic.”

With government money paying the salaries of priests and ministers, some legal experts see a troubling precedent given the separation of church and state called for in the Constitution.

Micah Schwartzman, a University of Virginia law professor specializing in constitutional issues and religion, said the treatment of faith groups goes beyond fairness by giving them preferential treatment. “That’s something we haven’t seen before,” he said. “That’s new.”

AP’s analysis found that the Archdiocese of New York, where Cardinal Timothy Dolan has helped lead the push for religious groups seeking federal aid, was a major beneficiary among Catholic organizations.

The New York Archdiocese received 15 loans worth at least $28 million just for its top executive offices. Its iconic St. Patrick’s Cathedral on Fifth Avenue was approved for at least $1 million.

More rural dioceses also received loans valued at between $5 million and $10 million. They included the dioceses of Covington, Kentucky, and Knoxville, Tennessee.

Loans reflect only a range of value because the government refused to release precise amounts. In addition, the loan data released this week doesn’t name recipients of loans under $150,000, which would include many Catholic parishes and schools. The AP and several other news organizations have sued the Small Business Administration to compel the release of complete information.

Although the Paycheck Protection Program was intended to help businesses and non-profits financially squeezed by the pandemic, the AP found that some dioceses receiving loans were already suffering financial stress due to large payments to clergy abuse victims.

In the St. Paul-Minneapolis archdiocese, where church leaders recently emerged from bankruptcy after agreeing to pay victims $210 million, church officials told AP that at least 80 of its parishes and affiliated organizations applied for money.

Clergy abuse payments also have strained the Diocese of Erie, Pennsylvania, as well. Since 2018, following an explosive state attorney general’s investigation, the diocese has spent at least $12 million to settle lawsuits and establish a compensation fund for victims.

The diocese told AP that approximately 80 affiliated organizations including schools and parishes received $10.3 million in paycheck protection loans, while its administrative offices received nearly $883,000. Diocesan spokesperson Anne-Marie Welsh told AP, “the Diocese of Erie’s participation in the Payroll Protection Program was not related to the clergy sex abuse crisis.”