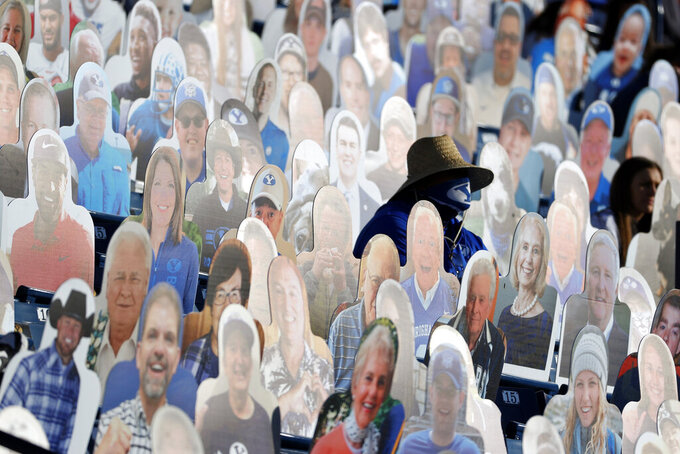 The college football Saturday started with another game being postponed, the 18th of the week, and a dispute between Clemson and Florida State.

Clemson wanted to play, even though it brought a player to Tallahassee who ended up testing positive on Friday night. Florida State medical officials said no, and the Tigers went home mad.

Who is right is hardly worth arguing. Both schools can reasonably claim they appropriately followed protocols and their decisions were approved by experts.

“We listened to our medical folks and their assessment of the risk and we decided it wasn’t safe to play today,” Florida State athletic director David Coburn told the AP.

This is the season college football signed up for when conferences decided to play through a pandemic that is raging worse than it has all year.

It is all very frustrating, and especially disappointing for players, who are being asked to follow a litany of rules that make life anything but normal so they can have a chance to compete.

It is also all very predictable, and everybody making decisions about whether to play gave fair warning this was coming.

“We will have disruptions during the season,” Big 12 Commissioner Bob Bowlsby said in May. “I fully expect that we’ll have an outbreak on Wednesday afternoon and games may need to be canceled on Saturday. We’ll need to understand shutdown procedures and how we go about quarantining when the need arises.”

Louisiana-Lafayette coach Billy Napier became the 17th to publicly acknowledge testing positive for COVID-19. The 24th-ranked Ragin' Cajuns had their game called off this weekend and returned to the practice field Saturday, without their coach.

College football can't control the pandemic. Nothing seems to be controlling the pandemic right now. So college football will continue to push through it, hoping for the best and trying to complete the season before it turns into a farce.

The College Football Playoff rankings debut Tuesday. Generally, the first rankings create a fair amount of noise. Plenty of teams have started at or near the top four and were nowhere to be found by the time the final and only rankings that matter come out in December.

There is a little more intrigue in these rankings because this season is so weird. No. 2 Notre Dame and No. 4 Clemson have each played eight games. No. 1 Alabama seven. No. 5 Texas A&M six. No. 3 Ohio State four. No. 11 Oregon three.

How will the committee sort through that?

Even more interesting will be how the committee judges No. 7 Cincinnati, No. 8 BYU and some of the other unbeatens outside the Power Five.

If those teams have any shot of cracking the top four, and realistically only the Bearcats have a case, where they start matters.

Cincinnati played maybe its toughest opponent of the season and came away with a victory against UCF on Saturday.

The Bearcats still have some games left in the American Athletic Conference to further impress the committee. If all goes well, Cincinnati and No. 25 Tulsa could play two straight weeks to end the season.

BYU had a glorified scrimmage against North Alabama and has just one game left against San Diego State on Dec. 12. The Cougars are trying to add games, and college football fans could not help but notice that Cincinnati and BYU are both off Dec. 5 after some schedule shuffling by the American.

As great as it would be for fans, the chances Cincinnati would schedule a game against BYU ahead of its regular-season finale at Tulsa — which will likely lead to an AAC championship game against Tulsa — seems unlikely.

The Bearcats need to prioritize winning their conference, which might not get them in the playoff but would definitely get them a New Year's Six bowl bid.

Even BYU might be best served finishing 10-0 and hoping that's good enough to get a Fiesta Bowl bid. Though the Cougars have a tougher path to one of those big games as an independent.

What could make Cincinnati and BYU decide to get together? If the rankings come out Tuesday and Cincinnati and BYU are both ranked in about the same spots they are by the AP, maybe they'll see a game against each other as a way of cracking the top four.

AROUND THE COUNTRY: Illinois went into Nebraska and worked the Cornhuskers, then had a little fun at their expense on Twitter: “Good game Nebraska. Thanks for bringing back B1G football.” It is possible that tweet wasn't intended to be snarky, but it certainly came across that way. Somebody decided it was not polite, and it was later deleted, but too late to keep it from going viral. Nebraska has made a lot of noise the last couple of months, being a general nuisance to the rest of the Big Ten — which admittedly earned some of that grief. But if you're going to make a stink about not being allowed to play in a pandemic, expect to hear it when you start 1-3. ... J.T. Daniels threw for 401 yards in his debut for No. 13 Georgia. The only reasonable explanation for why it has taken so long for coach Kirby Smart to play the USC transfer who is coming off a knee injury is health. But Daniels insists he's been good to go since early October. ... No. 17 Iowa State can earn a spot in the Big 12 title game for the first time by beating No. 22 Texas next week after hammering Kansas State. ... Meanwhile, No. 18 Oklahoma dusted No. 14 Oklahoma State in Bedlam and, after starting Big 12 play with two losses, the Sooners can reach the Big 12 title game by winning out. The downside for the Big 12 is the best the conference can do now is a two-loss champion and that's probably not going to get a team in the CFP. ... National coach of the year? Indiana's Tom Allen might be the leader for that award even after losing to Ohio State. ... No. 15 Coastal Carolina beat defending conference champion Appalachian State to remain unbeaten. The Chants have this season's buzzworthy young coach in Jamey Chadwell. South Carolina could do worse than looking toward Myrtle Beach and the state's only unbeaten FBS team (tak,e that Gamecocks and Tigers) for their next coach. One problem: Looks as though Chadwell is going to be tied up until Dec. 19 and the Sun Belt title game, and South Carolina would like a coach in place before the early signing period on Dec. 16. ... No. 21 Liberty's undefeated season ended on a late blocked field goal by North Carolina State as Wolfpack coach Dave Doeren adeptly avoided calling a timeout that would have wiped out the block the way Virginia Tech did two weeks ago ... Penn State is 0-5 for the first time, and because it seemingly can always get worse for the Nittany Lions this year, they also lost star tight end Pat Freiermuth to an injury. Next up: at Michigan. The Wolverines are 2-3 after a thrilling, triple-OT victory against Rutgers, which pretty much sums up the state of things with coach Jim Harbaugh's team. ... No. 19 Northwestern plays a version of football that is hard to find in 2020, but it works great against No. 10 Wisconsin. No team has beaten the Badgers more often (three times) in Paul Chryst's six seasons as coach. ... T ennessee has lost five straight games by double-digit margins for the first time in program history. The halcyon days of last year's Gator Bowl victory against Indiana seem like a long time ago for coach Jeremy Pruitt's Vols.