Taking it to the streets: Oakland closes roads to curb virus 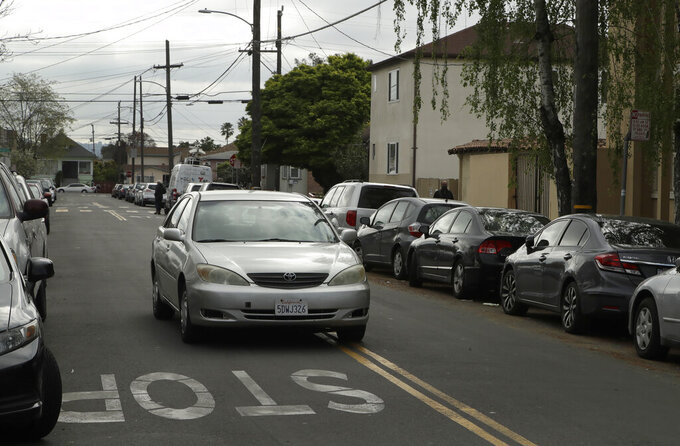 A motorist travels on East 16th Street at the intersection of Fruitvale Avenue on Friday, April 10, 2020, in Oakland, Calif. Oakland Mayor Libby Schaaf announced an initiative designed to make it safer to exercise and move about in Oakland by designating 74 miles of neighborhood streets, including East 16th Street, for through traffic by bikes, pedestrians, wheelchair users, and local vehicles only, starting Saturday, April 11. (AP Photo/Ben Margot)

OAKLAND, Calif. (AP) — Amid all the shutdowns across the country, Oakland, California, is taking a different approach. It’s closing 74 miles (119 kilometers) of streets to vehicles to create more space for people to get outside for safe, socially distanced exercise.

The move by Mayor Libby Schaaf to close about 10% of streets comes ahead of an expected sunny Easter weekend that officials worry will bring more people outside.

The measure — “Oakland Slow Streets” — will banish traffic in many places starting Saturday.

“By opening our streets to bikes, joggers and pedestrians we are giving Oaklanders more room to spread out safely,” Schaaf said at an outdoor news conference where she and city officials pulled face masks aside to speak. Schaff said she hoped the decision will “help give some joy” amid sweeping restrictions aimed at slowing the spread of COVID-19.

After weeks of social distancing, California officials say the virus is spreading at a slower pace than anticipated but Gov. Gavin Newsom urged people not to get complacent. The state had more than 580 deaths as of Friday, with more than 21,000 confirmed infections.

“Let’s continue to hold the line. Let’s just do this together. Give us a few more weeks to see where these trend lines go," Newsom said.

Extraordinary closures were being implemented at beaches, parks and gardens as the state entered its fourth week of a “stay at home” order that has shuttered schools and non-essential businesses.

Easter weekend is typically one of the busiest of spring at state parks, which include redwood forests, pristine beaches and idyllic picnic spots. This year, the parks department has asked people not to visit.

Los Angeles County officials said all botanic gardens, lakes and parks will be closed on Sunday to prevent an influx of Easter visitors. The parks have otherwise remained open but play and sports have been banned and indoor facilities, nature centers, golf courses, various programs and trails have closed.

A traditional Easter sunrise service that draws hundreds of people to a towering cross atop Mount Rubidoux in the city of Riverside was cancelled.The service dates to 1909 and has only been canceled twice previously, The Press-Enterprise reported.

“Please look to a local church for a live stream of their Easter services,” the organizers’ website said.

A blackball flag was raised Friday morning over the lifeguard tower at the Southern California surfing mecca called the Wedge, requiring surfers to get out of the water as Newport Beach implemented new rules barring surfing between 10 a.m. and 5 p.m. and closing the adjacent beach.

Overall beach use was down 95% in Newport Beach, the city said, but higher numbers of surfers and spectators had been noted at the Wedge during the week’s strong swell.

In the inland region east of Los Angeles, authorities warned that the hugely popular San Bernardino Mountains were closed to snow play and parking restrictions would be enforced. The move came as a storm dumped fresh snow on the range.

After a week of chilly weather and rain, the forecast for the weekend in much of California was for warmer weather and sunshine. Oakland officials said the reality that people will want to get outside was part of their rationale in creating pedestrian zones.

Ryan Russo, director of the city's Department of Transportation, emphasized that part of staying healthy is to “move your body in your local neighborhood — which is why we couldn’t have this be just one street."

Russo said the shutdowns will be phased in starting Saturday. Emergency vehicles, essential traffic and vehicles driven by residents who live on affected streets will still be allowed.

“Isn’t the message to stay home?” said Aura Campa, who lives near Oakland’s Lake Merritt but has been strict about staying home the past few weeks. “If they close the streets, they’re inviting everyone to come out and party. I don’t agree with it. I’m completely against it.”