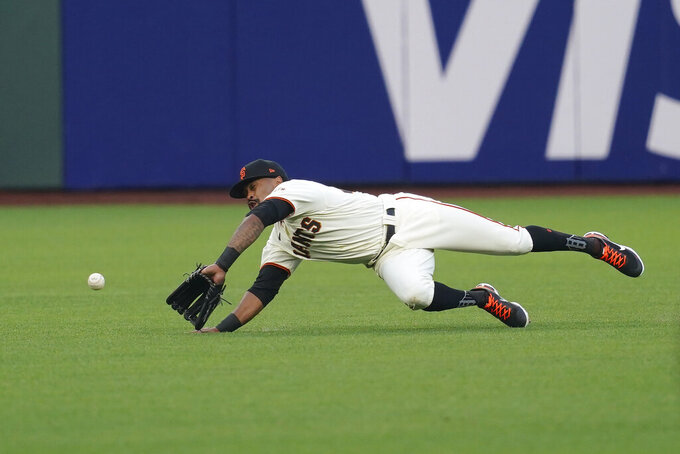 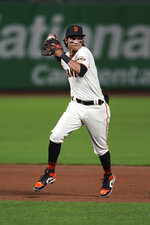 Zach Davies (1-0) struck out five over five innings to win his Padres debut, allowing five hits and three runs — two earned — as San Diego won for the fourth time in five games this season. The right-hander came over in a trade with Milwaukee last November.

Drew Pomeranz, the Padres' fourth reliever, finished for his first save.

Wilmer Flores hit an RBI single in the first and Tyler Heineman singled home one of San Francisco's two runs in the sixth. That wasn't enough support for Jeff Samardzija (0-1), done after giving up five runs in four innings.

The Giants haven't won a home opener since beating Arizona in 2017. They went 35-46 at home last season, second-worst in the National League.

Mist swirled just above the outfield for much of the game at Oracle Park, a typical summer night in the Bay Area. And while fans were missing from the stands, supporter Zak Ford posted a photo of himself in a kayak on McCovey Cove beyond the right-field wall.

The scoreboard didn’t work all night, just a black screen over center field.

San Francisco manager Gabe Kapler and players knelt again for the national anthem after a pregame message about the Black Lives Matter movement.

A moment of silence was held to remember civil rights leaders John Lewis and C.T. Vivian as well as members of the Giants organization and victims of the coronavirus pandemic.

Mayor London Breed threw out the ceremonial first pitch in a prerecorded video.

Padres: 1B Eric Hosmer was back in the lineup after missing two of the first four games with a non-COVID-19 illness. “He’s feeling pretty good right now,” manager Jayce Tingler said. “We’ve got him in the lineup and we believe he’s going to be good to go.” Hosmer had two bases-clearing doubles in a 7-2 season-opening win against Arizona on Friday night and hit a solo homer in a 4-3 loss Sunday.

Giants: Both 1B Brandon Belt (right Achilles tendinitis) and 3B Evan Longoria (right oblique strain) are making progress and expected to be ready to return later this week. ... INF Yolmer Sanchez has begun baseball activities in recent days as he deals with back spasms. ... RHP Trevor Cahill (right index fingernail injury) was scheduled to throw a bullpen.