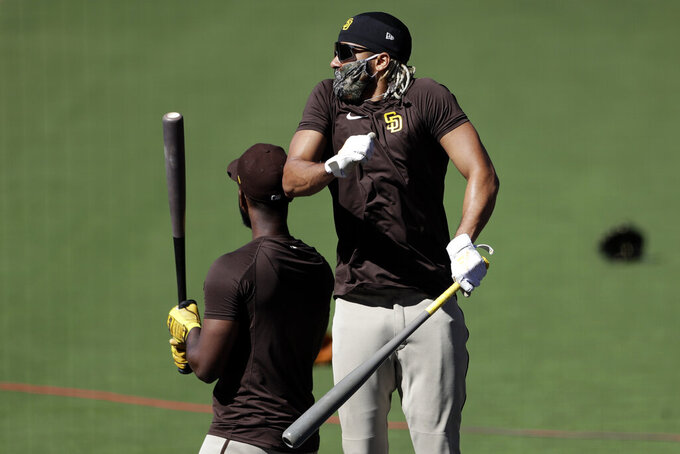 SAN DIEGO (AP) — Prized shortstop Fernando Tatis Jr. wore a facemask throughout the reboot of spring training Friday for the San Diego Padres, who reported that outfielder Tommy Pham tested positive for COVID-19 and is asymptomatic.

Preller said Pham has begun self-isolation. “He feels fine. As a staff we’re following all the contact tracing protocols and all the MLB protocols in terms of when you have a positive test," he said.

Pham will be able to return when he clears the protocol.

Pham was obtained in an offseason trade with Tampa Bay that also netted the Padres prospect Jake Cronenworth in exchange for outfielder Hunter Renfroe.

Tatis and outfielder Franchy Cordero appeared to be the only players who wore a mask through the whole workout at Petco Park, including drills in the field and batting practice.

Tatis is looking to rebound after his sensational rookie season was cut short in mid-August by a stress reaction in his lower back.

Preller said no players have talked of opting out as the Padres resumed training under rookie manager Jayce Tingler.

“I think our players understand there are risks involved; there are risks involved to everything,” he said. “To every individual I’ve had a conversation with, that Jayce has, they’re excited about coming back to playing baseball. They understand it’s a different environment and you’ve got to be very mindful of following the new protocols and trying to do everything you can from a sacrifice to your teammates, putting everybody in the position possible.”

The Padres have had informal workouts at Petco Park for several weeks. Spring training was shut down on March 12 due to the coronavirus pandemic.

“As far as ramping up, I’ve been very proud of our players and their ability to stay ready without a start date,” Tingler said. “They’ve been very impressive over the last couple of months and now it’s a matter of we’ve got 21 days left until opening day and we’ve got to get the guys back on the field finding their rhythm and timing and getting back in the thick of things as quickly as possible. Those are going to be the challenges over a short period of time.”

Preller said closer Kirby Yates was tending to a family issue and is expected back in San Diego on Sunday.