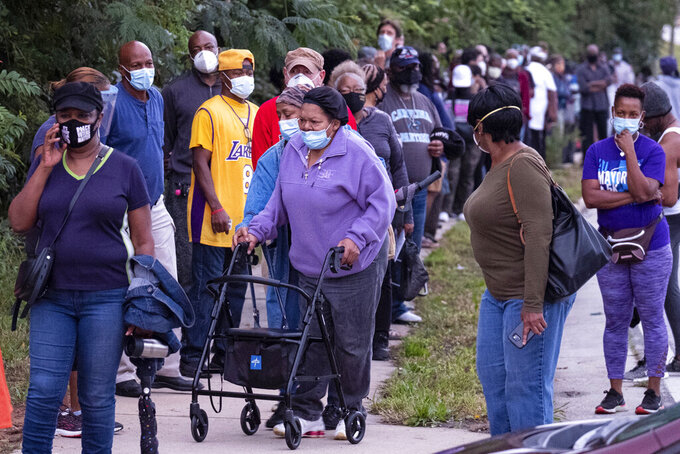 ATLANTA (AP) — Long lines of people eager to cast ballots formed as early in-person voting began in Georgia on Monday, and problems soon developed in the state's most populous county.

Election officials in Fulton County were aware of an issue with the electronic pollbooks used to check voters in at State Farm Arena, where the Atlanta Hawks NBA team plays, county spokeswoman Jessica Corbitt-Dominguez said.

The line began moving when the arena opened for voting at 8 a.m. and some voters were able to cast their ballots, but things ground to a halt a short time later when the pollbooks stopped working with hundreds of people waiting. By mid-morning, the problem appeared to have been resolved and the lines had cleared at the arena, which is the largest early voting site in the state with 300 voting machines.

“We're disappointed that it happened,” Hawks CEO Steve Koonin told reporters, but he noted that there are still plenty of early voting days left.

Some people lined up before dawn to be among the first to participate in early in-person voting, which runs through Oct. 30 in Georgia. Turnout also may have also been boosted because Monday is a federal holiday, so more people are off work.

While voters must vote at their assigned polling place on Election Day, they can vote at any voting site in the county where they live during early voting.

With record turnout expected for this year's presidential election and fears about exposure to the coronavirus, election officials and advocacy groups have been encouraging people to vote early, either in person or by absentee ballot.

Problems with the electronic pollbooks also contributed to long lines during Georgia's primary in June, along with high turnout, the consolidation of polling places and shortages of poll workers.

Natalie Rawlings, 49, tried first to vote early at a library in Atlanta, but there was no parking and a long line, so she went to State Farm Arena, where the line didn't move for 45 minutes.

Someone came out and announced that there was a “known software issue” they were hoping to work through. A handful of people left, but most stayed. Overall, it took Rawlings about an hour and a half to vote, but she said she wasn't frustrated.

“I’m outside. It’s a nice day. They’re giving water away. There are worse things. And everybody is appropriately socially distanced,” she said.

Rawlings, a Democrat, said she was motivated by the “coarseness” of President Donald Trump's language and his seeming lack of respect for other branches of government and world leaders: “It’s gotta end.”

Election officials also reported long lines in Republican-leaning Floyd County in northern Georgia, which also had a problem with the electronic pollbooks. That slowed things initially at the county’s two open voting locations, but it was resolved within about an hour, said Robert Brady, the county’s chief election clerk.

“Typically in Floyd County, you have a line that lasts five minutes. Today it’s taking up to 30 minutes,” Brady said. “It’s because of the huge — and I’m talking about huge — turnout.”

“We’d prepared as much as we could, but there’s only so much space in the rooms and parking in the parking lot. We’re maxing out both of those,” Eveler said.

“People are double parking, we have gridlock pretty much in our parking lot,” she added.

In Macon, Seth Clark arrived to vote at the main election office at about 9:30 a.m. Monday and found a U-shaped line wrapping around the parking lot. He was still waiting 90 minutes later, estimating he’d gotten through only about half the line.

“I’ve never seen this many people on the first day of early voting,” said Clark, who won election over the summer to a nonpartisan seat on the Macon-Bibb County commission.

With Georgia emerging as a potential battleground state, surrogates from both the Republican and Democratic presidential campaigns were scheduled to travel to the state Monday.

Meanwhile, Donald Trump Jr. was set rally Republican voters in Savannah near the coast and Kennesaw, just outside Atlanta.

Associated Press contributors include Brynn Anderson and Ben Nadler in Atlanta and Russ Bynum in Savannah.