Telemedicine provider Teladoc to spend $18.5B on Livongo 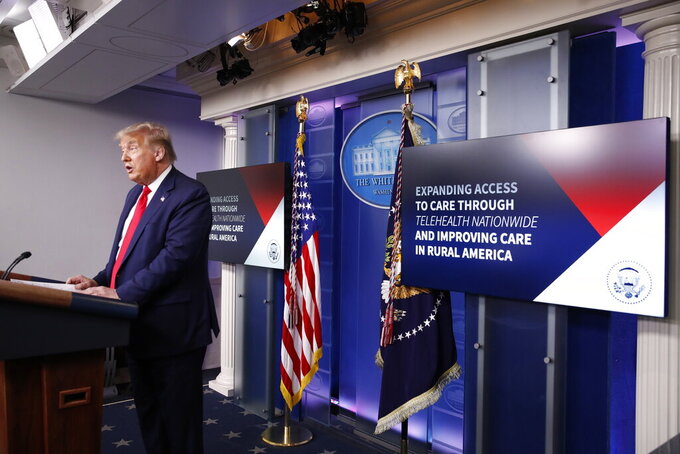 President Donald Trump speaks during a briefing with reporters in the James Brady Press Briefing Room of the White House, Monday, Aug. 3, 2020, in Washington.(AP Photo/Alex Brandon)

One of the nation’s biggest telemedicine providers will spend more than $18 billion to stoke an approach to care that grew explosively during the pandemic and recently received an endorsement from President Donald Trump.

Teladoc Health Inc. plans to dive deep into managing the health of patients with diabetes and high blood pressure with a cash-and-stock deal for Livongo Health that’s expected to close later this year.

Shares of both companies tumbled Wednesday after they announced the deal, a sign that Wall Street thinks Teladoc may be paying too much for a stock that has already seen a nearly five-fold increase in price this year.

Telemedicine involves care delivered remotely, often with a live video connection through patient smartphones or tablets. Millions of patients were forced to try it for everything from routine care to checkups with specialists after COVID-19 shut down much of the economy earlier this year.

Teladoc said late last month that its total visits tripled in the recently completed second quarter to 2.8 million, and revenue grew 85%. The company also said it expects gains to spill over into 2021, when it projects revenue growth of between 30% and 40%.

Telemedicine has been around for years, and a growing number of employers have offered it to their workers as a way to save money and improve their access to care.

The practice was relatively slow to catch on with many patients before COVID-19. But now there’s growing momentum to keep some of telemedicine’s gains after the pandemic finally fades.

Teladoc CEO Jason Gorevic said the pandemic accelerated an inevitable shift to more virtual care for patients. He said his company saw a big bump in business because of COVID, but Teladoc continues to see higher use rates even in markets where the pandemic has waned.

“People have realized the power of virtual care, and they're not going back," he told The Associated Press on Wednesday.

The Trump administration announced on Monday that it was taking steps to give telehealth a broader role for patients who live in rural communities and are covered by the federal government's Medicare program for those age 65 and older.

There’s also bipartisan support in Congress for a broader expansion of telemedicine coverage to make it a more regular option for people living in cities and suburbs.

Health care researchers say they expect the practice to play a greater role in health care once the pandemic finally fades. That's partly because people have become more used to it, and they may be more wary now of sitting in waiting rooms filled with other sick patients.

But before that happens, health insurers need to figure out whether they should make some pandemic-driven coverage expansions of telemedicine permanent and how much they should pay for the practice.

In those cases, a patient might receive a call when an abnormal change is detected to see if they need help. That type of monitoring can help keep people healthy and out of expensive hospitals.

Livongo founder and Executive Chairman Glenn Tullman said the Teladoc deal will make it easier for the patients that his company monitors to connect quickly with doctors if needed. He noted that many consumers now expect to get help whenever they need it thanks to the influence of the retail giant Amazon.com.

“They're used to doing that in everything except in health care, where you call up and they say your appointment is two weeks from now,” he said.

Purchase, New York-based Teladoc said Wednesday that it will pay $11.33 in cash and a portion of its stock for each Livongo share. Based on Tuesday's closing prices, that implies a deal price of about $159 per share, which is a 10% premium for Livongo shareholders.

The deal makes sense for both companies because it fills in gaps in the services they provide, said Sean Dodge, an analyst with RBC Capital Markets. But he noted that the price will invite scrutiny.

“When you pay this much for another company, that heightens the execution risk,” he said. “There’s high expectations for what you do with this.”