Tennessee center ready to use rare 6th year of eligibility 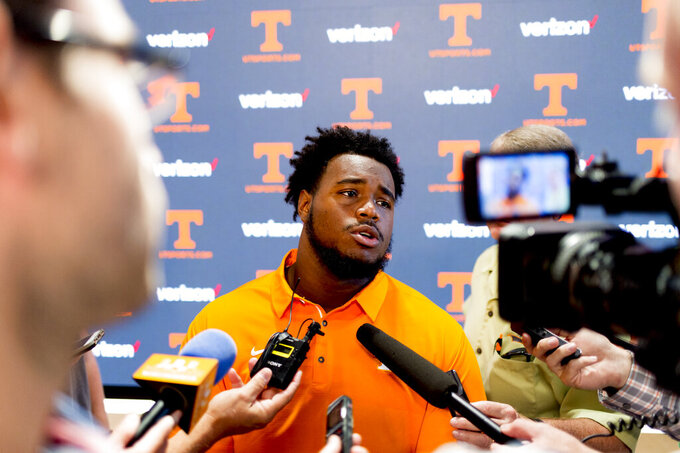 FILE - In this Aug. 9, 2018, file, photo, Tennessee offensive lineman Brandon Kennedy answers questions during a news conference in Knoxville, Tennessee. Brandon Kennedy already has a master's degree in sports psychology and is working on a second as the offensive lineman is back for a rare sixth college season. The center who started his career at Alabama before transferring chose to try playing one final year on a Tennessee offensive line that finally has talent and depth. (Calvin Mattheis, The News Sentinel via AP, File)

KNOXVILLE, Tenn. (AP) — Brandon Kennedy had plenty of reasons to opt out of college football even as the Southeastern Conference prepares for its league-only season.

He already has earned a master's degree in sports psychology and will graduate in December with his second in agriculture leadership. The Tennessee center didn't have to take advantage of the rare sixth year of eligibility to graduate after a torn ACL wiped out his 2018 season.

Even amid a pandemic, Kennedy just wants to play.

“I’m ready to play," Kennedy said Thursday. “I feel like I’ve worked hard for this senior year and coming back for this sixth year. I’m all in. We know the risks and the challenges, but I feel like we’ve been educated and they do a great job of helping us.”

Kennedy was the only offensive lineman to start all 13 games last season as the Volunteers turned around a disastrous start by winning their final six games, capped by a comeback victory at the Gator Bowl for an 8-5 season.

Matching those wins will be a major challenge if the SEC is able to pull off its planned 10-game schedule. The pull of football was just too much for the lineman from Wetumpka, Alabama, to pass up in a career that started at Alabama before he switched schools as a graduate transfer.

“Just being able to come back, play another year, get more film on tape and also help the team be successful, I think that’s what went into it," Kennedy said of his decision. "Also to be able to get another degree. I will be graduating in December ... I’m excited and glad I did. I’m not looking back.”

The 6-foot-3, 300-pound center is part of an offensive line that has the potential to be among the best not only in the SEC but of all the conferences planning to play this fall.

Senior left guard Trey Smith has one final season before he's expected to head to the NFL. Left tackle Wanya Morris and right tackle Darnell Wright both will be sophomores after impressive debuts. The only issue is junior right guard Cade Mays.

The Georgia transfer and Knoxville native has been practicing since announcing his transfer in January for the chance to play with his younger brother, freshman offensive lineman Cooper Mays. But Tennessee coach Jeremy Pruitt announced Monday that Mays' waiver to play immediately had been denied.

Mays is appealing the ruling. His parents sued the University of Georgia last December over an incident when Kevin Mays, Cade's father, lost part of his little finger after it was caught in a folding chair at a dinner for recruits at Sanford Stadium.

“He’s worked hard,” Kennedy said of Mays. "The decision is not up to us, but we fully support him in everything that he does and his decision. We’re happy for him, and we’re here working with him.”

Tennessee, which started practice Monday, hopes for a ruling on Mays' appeal before the Volunteers open the season Sept. 26 at South Carolina.

Kennedy believes he and the rest of the Volunteers handled the offseason filled with Zoom meetings well. He also worked with senior quarterback Jarrett Guarantano watching lots of film last spring and studying what they need to do better.

The center said he feels bad for players in other conferences like the Big Ten and Pac-12 cancel or move seasons to next spring. Kennedy is confident the SEC will make it safe as possible to play during the coronavirus pandemic.

“I know that the commissioner and people around our conference will make the best decision for us possible,” Kennedy said. "We’re excited whether we play or not. We want to play.”