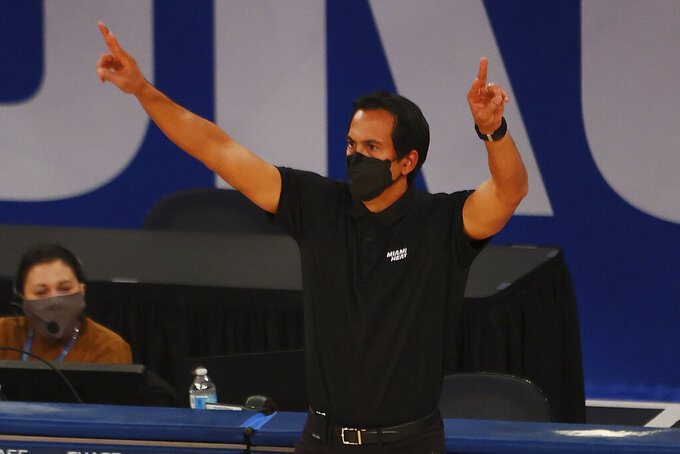 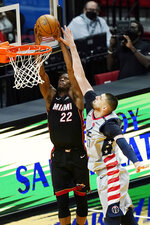 MIAMI (AP) — It was only a week ago when the Miami Heat emerged from a long postgame locker room meeting following another disappointing loss, privately promising one another they would do more and publicly vowing to be better.

They’re 3-0 since and hopeful.

Beating Washington once and New York twice hardly is cause for a parade, but those victories might be a needed kick-start for the reigning Eastern Conference champions. The Heat start a seven-game road trip, the franchise’s longest since January 2009, in Houston on Thursday knowing the results from the next two weeks may vault them back into the playoffs race or return them to the edge of the abyss.

“There were so many things that hit us,” coach Erik Spoelstra said. “I just really commend the group for the mental stability and toughness, to be able to stay the course and not making excuses, not feel sorry for ourselves, not ask for pity from anyone. We have a very tough-minded group. If anybody can handle all of these things that have happened, it’s this group in that locker room.”

The Heat have used 16 starting lineups in 24 games. They’ve seen half their roster miss time because of coronavirus-related issues — either positive tests themselves or contact tracing that suggested they could have been exposed to COVID-19, and Jimmy Butler missed 10 games because of those protocols. Veteran guards Goran Dragic and Avery Bradley are both injured and out for at least a few more games. Meyers Leonard, a starter most of last season, won’t play again this year because of shoulder surgery.

At 10-14, nobody is happy. But at least the mood is better — evidenced by Butler remaining prone on the court for several seconds following a foul in the final moments of Miami’s win over New York on Tuesday.

From afar, it looked like an injury. What most fans couldn’t see was Butler peeking at the Heat bench and laughing.

A week ago, nothing was funny for the Heat. Things changed quickly.

“I’ve studied Mark Wahlberg and how he acts so incredibly well and I’ve taken a few pointers,” Butler said. “For my guys, they need to know that everything’s going to be OK. It’s OK to have fun. It’s OK to joke around. Yeah, we want to win, but never forget to have fun, smile, enjoy the situation that you’re in.”

The Heat were flying to Houston on Wednesday mired in an Eastern Conference standings mess that doesn’t have much in the way of distancing; Miami entered the day in 10th place in the conference, three games from third and four games from last.

And all seven teams that they’ll face on this trip, entering Wednesday, had better records than Miami does — after the opener against the Rockets, the Heat face NBA-leading Utah, the Los Angeles Clippers, Golden State, Sacramento, the Los Angeles Lakers in a primetime NBA Finals rematch and Oklahoma City.

For about a week and a half, all the Heat will have to rely on is one another. Because of the protocols the league has put into place amid the pandemic, players and coaches can’t leave team hotels on road trips right now for much of anything besides practices, workouts, treatment and games. The trip will have a very us-against-the-world vibe for the Heat, and Butler likes that.