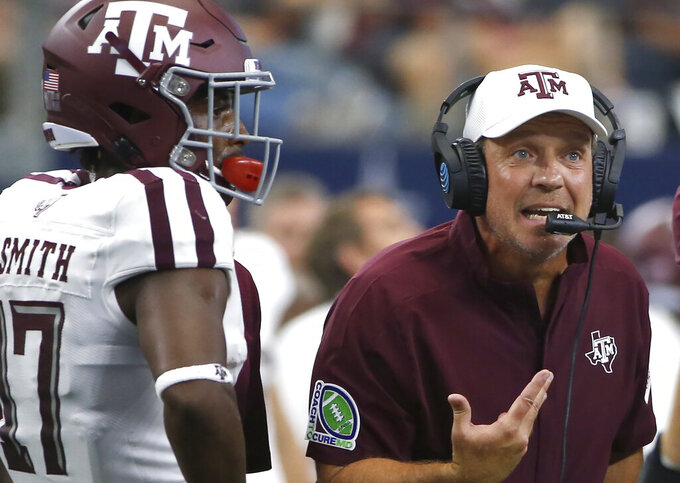 FILE - In this Sept. 28, 2019, file photo, Texas A&M head coach Jimbo Fisher talks with his team as wide receiver Ainias Smith (17) looks on as they play Arkansas during the first half of an NCAA college football game in Arlington, Texas. Texas A&M's football program was placed on probation and Fisher given a six-month show cause order by the NCAA on Thursday, July 2, 2020, after the Aggies were found to have violated recruiting and other rules beginning in January 2018. (AP Photo/Ron Jenkins, File)

COLLEGE STATION, Texas (AP) — Texas A&M's football program was placed on probation and coach Jimbo Fisher given a six-month show cause order by the NCAA on Thursday after the Aggies were found to have violated recruiting and other rules beginning in January 2018.

Fisher, who had just been hired by Texas A&M, and an assistant coach had impermissible contact with a recruit, the NCAA said without identifying the coaches by name. The assistant, Jay Graham, is now a member of Jeremy Pruitt's staff at Tennessee.

“While I am disappointed in the violations, including an unintended one that resulted from a conversation with a high school athlete, it is still my responsibility to ensure we are adhering to each and every rule," Fisher said in a statement issued by the school. “I am pleased to have this matter completely behind our program and look forward to continuing our efforts to make every aspect of our program one all Aggies can continue to be proud of.”

Fisher is 17-9 with two bowl victories in his first two seasons in College Station. Texas A&M signed Fisher to a 10-year, $75 million contract after he won a national title and three Atlantic Coast Conference championships in eight seasons at Florida State.

The negotiated resolution with the NCAA came after it found Fisher “failed to promote an atmosphere of compliance." As part of his punishments, Fisher was banned from phone calls, emails and texts with prospects for nine days in January.

Graham was also given a six-month show cause order by the NCAA.

“During the process of hiring coach Jay Graham, we were made aware of the circumstances at his previous institution, and we vetted it thoroughly in accordance with NCAA and SEC bylaws," Tennessee athletics said in a statement Thursday. "We established and maintain extremely high confidence in Coach Graham’s commitment to compliance and are proud to have him on our staff.”

“Since I arrived at Texas A&M, I have seen up close and personal Coach Fisher’s commitment to integrity and following the rules. I appreciate his response, including actions taken during the process itself," Texas A&M athletic director Ross Bjork said in a statement. “This will have no impact on our current or future student-athletes, the 2020 postseason, or our pursuit of championship success on and off the field.”