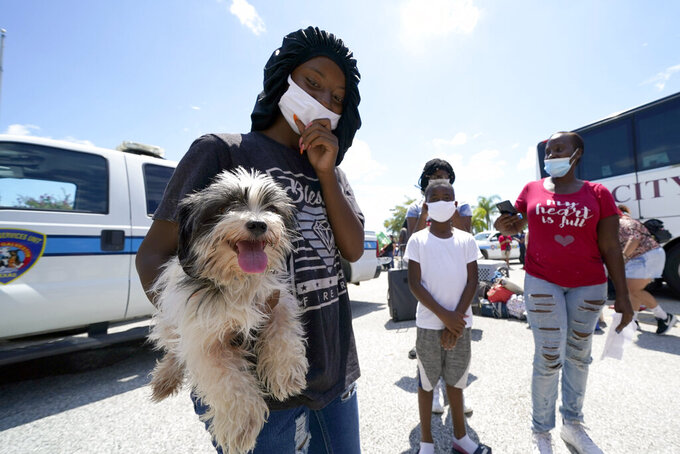 Tiara Walker holds her dog, Buece, as she waits with her family to board a bus to evacuate Tuesday, Aug. 25, 2020, in Galveston, Texas. The evacuees are being taken to Austin, Texas, as Hurricane Laura heads toward the Gulf Coast. (AP Photo/David J. Phillip)

AUSTIN, Texas (AP) — Mass evacuations along the Texas coast as Hurricane Laura approached Tuesday unfolded with the pandemic also a concern of residents and emergency officials, who urged families to hunker down in hotels instead of shelters and loaded disinfectants onto buses that shuttled families inland to safety.

More than 385,000 residents were told to flee the Texas cities of Beaumont, Galveston and Port Arthur. The National Hurricane Center projected that Laura would draw energy from warm Gulf waters and become a Category 3 hurricane before making landfall in Texas or Louisiana on late Wednesday or early Thursday.

The evacuations began another test of the state’s handling of the coronavirus, which clobbered Texas this summer and has resulted in more than 11,000 deaths. State officials said buses deployed to the coast were stocked with personal protective equipment and disinfectants, and that buses would make more trips and carry fewer passengers in order to keep people farther apart.

Virus testing teams will also be deployed to shelters “as soon as practical," said Nim Kidd, chief of the Texas Division of Emergency Management. Officials recommended that families ride out the storm socially distanced in hotels if possible, rather thank bunking up in shelters with others.

"The state and local governments are fully aware that they’re dealing with a pandemic while they’re responding to Hurricane Laura,” Republican Gov. Greg Abbott said.

The storm approached as the number of COVID-19 patients in Texas hospitals dropped below 5,000 for the first time since June, continuing an encouraging trend after a massive surge in admissions in July. More than 180 new deaths were also reported.

In Dallas, a corrections officer sued the county sheriff over what he says are unsafe conditions at the jail and inadequate coronavirus testing. Emanuel Lewis claimed in a suit filed Monday that Sheriff Marian Brown has endangered his life and the lives of his colleagues by not providing them with coronavirus testing at the jail and doing too little testing of inmates.

As of Monday, the jail had 45 inmates and 27 staff members with active cases of COVID-19, according to the Texas Commission on Jail Standards. Another 474 inmates were quarantined but did not have active cases. The suit follow any earlier civil case inmates at the Dallas County Jail brought over conditions there amid the pandemic. Texas' prison system is facing similar suits.