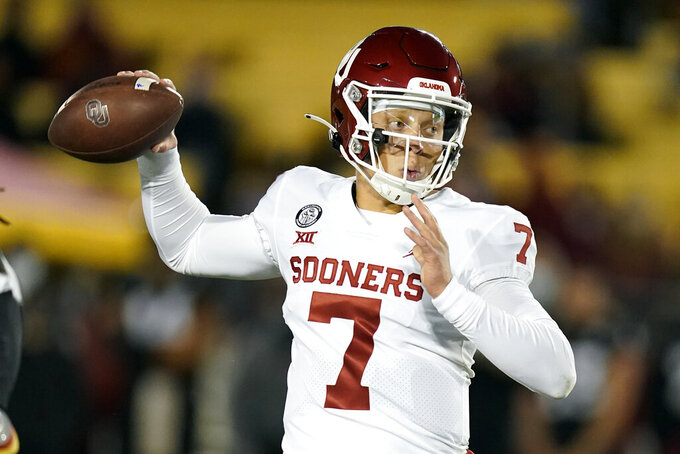 FILE - In this Saturday, Oct. 3, 2020, file photo, Oklahoma quarterback Spencer Rattler throws a pass during the first half an NCAA college football game against Iowa State, in Ames, Iowa. No. 22 Texas vs. Oklahoma, at Cotton Bowl Stadium, Dallas. There is no State Fair of Texas this year because of the pandemic and both teams are coming off a loss, but this is still the Red River rivalry. (AP Photo/Charlie Neibergall, File)

DALLAS (AP) — No. 22 Texas and Oklahoma will meet with both the Red River rivals not ranked in the top 20 for the first time in the 21st century, in a mostly empty Cotton Bowl without the masses of burnt orange and crimson divided at the 50-yard line.

A masked Big Tex will greet the smattering of visitors in his usual slow drawl Saturday, but with the Texas Star ferris wheel and every other ride silent behind him. The pandemic shut down the state fair for the first time since World War II.

The five-time defending Big 12 champion Sooners (1-2, 0-2) have lost consecutive games for the first time since 1999, the year Texas won under circumstances similar to now in Bob Stoops' first season at OU when the No. 23 Longhorns rallied to beat the unranked Sooners.

Lincoln Riley sure isn't used to this after taking Oklahoma to the College Football Playoff each of his first three years since replacing Stoops. He has an unranked team for the first time coming off losses to Kansas State and Iowa State.

“This is in my opinion the greatest rivalry in college football,” Herman said. “I know a lot is going to be different because of 2020, but this is still Oklahoma-Texas.”

Sam Ehlinger is set to be the fifth Texas quarterback to start this rivalry four times, not counting the Big 12 championship game two years ago. He's 1-2 in the Cotton Bowl, and also lost the 2018 title game to the Sooners at nearby AT&T Stadium, home of the Dallas Cowboys.

Talented Oklahoma freshman Spencer Rattler is trying to follow in the Heisman Trophy tradition of Baker Mayfield and Kyler Murray, who became No. 1 NFL draft picks after leading the Sooners to the playoff under Riley.

Rattler's first experience of running down the Cotton Bowl ramp won't be nearly what it was for Ehlinger and so many others before him because capacity is being limited to 25,000 in the 90-year-old stadium that now seats 93,000.

“It’s hard to understand what it feels like to play this game,” Riley said. “Now this year, there’s definitely going to be some differences. It’s still gonna be a great football game. That’s not going to stop that.”

From the moment the buses reach the state fairground, it will feel different for players who have experienced the game before. Normally, throngs of people enjoying the state fair line up to welcome — or jeer — the caravan.

“Just the bus ride in is always one of the, other than the game, is one of the coolest parts of this,” Riley said. “To pull into the fairgrounds without anybody there will be a little eerie.”

Oklahoma sacked Ehlinger nine times last season, battering him under a barrage of stunting blitzes and a defensive line that collapsed the pocket around him.

The Texas offensive line hasn’t been nearly as porous through the first three games this season. The Longhorns didn’t allow a sack last week against TCU, and Ehlinger leads the country with 14 touchdown passes.

While the former Arizona high school standout leads the Big 12 in yards passing and efficiency, he and Texas Tech's Alan Bowman are tied for the most interceptions with four. Rattler had chances to lead tying or winning drives late in both losses, but those hopes ended with interceptions both times.

Texas had high hopes that a new defensive scheme using linebacker Joseph Ossai as an edge pass rusher would make a huge difference this season in getting to opposing quarterbacks. Not yet.

Ossai has just one sack and the Longhorns have just one total the past two games. They were close several times last week, but the biggest hit was costly when linebacker Juwan Mitchell was ejected for targeting.

State fair officials are requiring all visitors to wear masks, and game officials said security personnel will be in the stands to enforce the guidelines on masks and social distancing.