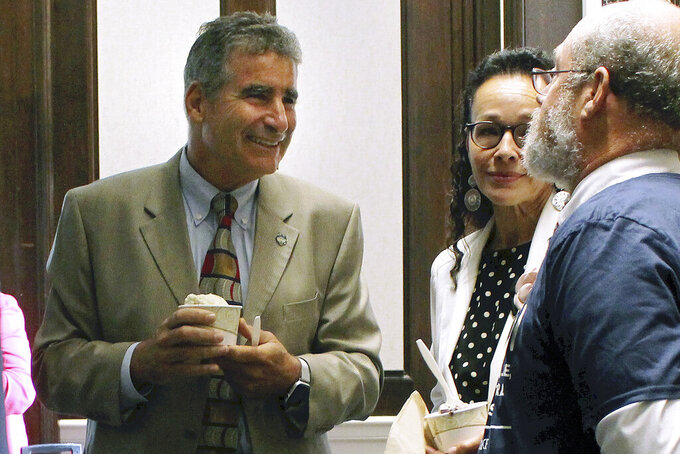 FILE - In this Aug. 14, 2019 file photo, University of Connecticut president Thomas Katsouleas, left, speaks with board of trustees members Andrea Dennis-LaVigne, center, and Steven Zinn, right, head of the Department of Animal Sciences, in Storrs, Conn. Katsouleas has submitted his resignation as president, effective at the end of next month. (AP Photo/Pat Eaton-Robb, File)

STORRS, Conn. (AP) — University of Connecticut President Thomas Katsouleas has submitted his resignation from the position, effective at the end of next month.

Katsouleas announced the decision March 13 in a letter to Dan Toscano, the chairman of the school's Board of Trustees, saying he was stepping down for, “reasons we have discussed at length over time.” He did not elaborate on what those reasons were.

The letter, made public Thursday, indicated he planned to stay at UConn in another role.

“While there is no need to list them here, I am very proud of the advancements made by the University during my tenure as its 16th president,” he wrote. “UConn has fared extraordinarily well in the face of unprecedented challenges under the leadership and decision making of our leadership team and the Board. I look forward to contributing further to the continued success of the state’s flagship institution of higher education as a member of our distinguished faculty.”

UConn spokeswoman Stephanie Reitz said the university waited to make the news public until after the end of the academic semester and commencement to avoid distracting from those events.

Katsouleas took the job in October 2019, after serving as executive vice president and provost at the University of Virginia.

During his short tenure, he has guided UConn through the height of the pandemic, but also faced budget issues that led to tuition hikes and cuts including the elimination of four athletic teams.

When he took the job, he outlined a vision for UConn that included doubling the school's research budget to $500 million in a decade and providing free tuition to students from families who make less than $50,000 a year.

That program was suspended last October as part of budget cuts at the school.

UConn recently announced that it had lost $110 million during the coronavirus pandemic, but with the help of about $100 million in federal COVID-19 relief funds and additional funding from the state legislature, it had erased its budget deficit.

“He and members of the Board of Trustees agreed that it was time for a change in leadership, and I look forward to working with the Board of Trustees to find a suitable replacement who shares their vision of growth, and building on its reputation as one of the top public institutions of higher learning in the country,” he said.

Toscano, in an email to the university community Thursday afternoon, said trustees supported Katsouleas's decision to step down and would appoint an interim president May 19.

“UConn is fortunate to have a strong and experienced leadership team who will continue to work together, with the interim president, and with the board to guide our university forward,” he wrote.