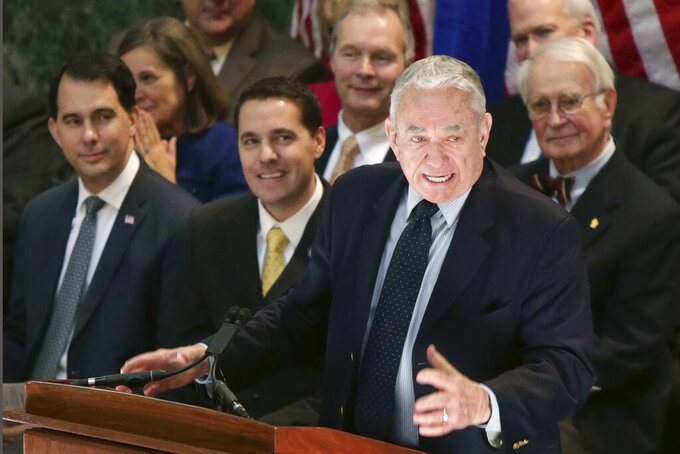 FILE - In this Jan. 31, 2017, file photo, former Wisconsin Gov. Tommy Thompson speaks at the State Capitol in Madison, Wis. Thompson, the current University of Wisconsin System President, announced Thursday, Feb. 18, 2021, that he wants most classes to be taught in-person this fall, saying it's time to give students a typical college experience again. (Michael P. King/Wisconsin State Journal via AP)

MADISON, Wis. (AP) — University of Wisconsin System President Tommy Thompson announced Thursday that he wants most classes to be taught in-person this fall, saying it's time to give students a typical college experience again.

Thompson told reporters in a virtual question-and-answer session that he has directed chancellors to ensure students at every campus have an opportunity to attend at least 75% of classes in person.

The system's social distancing, masks and aggressive testing protocols have kept COVID-19 infection rates low, Thompson said. Testing on Tuesday revealed only 24 infections across 13 four-year campuses, according to the system's latest data. Thompson said testing on Thursday showed a less than 1% positivity rate on all campuses.

“We are so safe,” Thompson said. “I know we'll never get back to normal. I know that. But I'm going to fight like hell to get back as close to normal as we possibly can. With testing, with vaccinations, with having our classes open, our dorms open, hopefully we'll be playing sports, having a good time once again."

Thompson noted that campuses offered about 20% of their courses online before the pandemic “so this is not that different.” As for instructors worried about contracting COVID-19 from a student in class, he said there wasn’t a single instance of that last year.

“We've got a job to do,” Thompson said. “We've got to educate our students. And we've got to make sure the students want to come back.”

The announcement came as the system grapples with pandemic-related revenue losses. UW-Madison alone expects to lose $320 million by the end of the fiscal year in June, due to dwindling tuition and loss of revenue from athletic events, housing and student unions.

Gov. Tony Evers’ 2021-23 state budget calls for increasing state aid to the system by $190 million, twice the funding Thompson requested. The question now is whether Republican legislators, who see the system as a breeding ground for liberal thinking, will go along with it.

Thompson, a former Republican governor, has been trying to bolster the system's standing in GOP eyes in hopes of maintaining Evers' funding levels. The in-person goal could build points with Republican lawmakers who have been pushing for a return to in-person instruction in K-12 schools.

“Hopefully we can hang on to (the funding increase),” he said. “We need this in order to rebuild the university. I'm going to make that story to all the legislators, especially the Republicans, all over the state, how important it is to build back the University of Wisconsin."

He painted the system as an economic driver for the state and a key innovator, noting that a community COVID-19 vaccination site was set to open fully UW-Oshkosh on Friday. The site has been vaccinating health care workers and other essential workers since last week.

“We're problem-solvers," Thompson said. "You got a problem, come to the university. We can solve it.”

Thompson, always gregarious, was especially enthusiastic during the question-and-answer session, kicking it off by declaring, “I'm at the top my game," and teasing reporters about their partying in college.