Thousands march in Croatia to honor war city despite virus 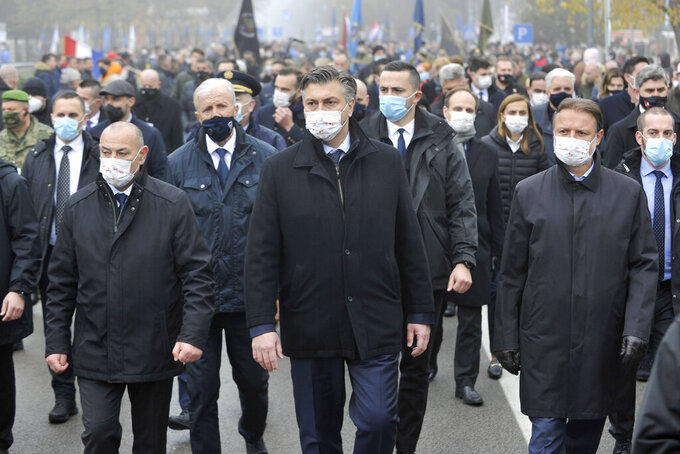 Croatia's Prime Minister Andrej Plenkovic, center, takes part in a commemoration march in Vukovar, Croatia, Wednesday, Nov. 18, 2020. Some thousands marched to commemorate the suffering of Croatia's eastern city of Vukovar during the 1991-95 war despite a continuously high number of infection and fatalities from the new coronavirus. (AP Photo)

ZAGREB, Croatia (AP) — Thousands on Wednesday marched to commemorate the suffering of Croatia’s eastern city of Vukovar during the 1991-95 war despite a persisting surge in new coronavirus cases in the country.

Prime Minister Andrej Plenkovic led the crowds, which also included Serb politicians who joined in as part of efforts to boost reconciliation and mend still tense ties between the rival Balkan nations.

Many participants in Vukovar failed to wear face masks or socially distance despite recommendations to do so from the country's epidemiologists. The annual event is of great symbolic importance for Croatia, which is still burdened by the 1990s war.

Croatia on Wednesday reported 3,251 new cases of infection with the virus while 38 people died in the past 24 hours in the country of 4.2 million people. Bigger gatherings are otherwise banned in the country and health authorities have said no more than 500 people should join the march in Vukovar.

More than 10,000 people died in the conflict that erupted when Croatia split from the Serb-dominated Yugoslav federation and the minority Serbs backed by the Yugoslav army rebelled against the move, taking hold of swaths of Croatia to set up a Serb mini-state.

The border city of Vukovar was demolished in the relentless, three-month Yugoslav army shelling before it fell into the Serb-led army's hands in November 1991. Hundreds of Vukovar fighters and civilians were killed and captured, while thousands of non-Serb residents were later expelled. This has made the city on the Danube a symbol of Croatia's independence plight.

Borislav Milosevic, a deputy prime minister from the Croatian Serb minority party, said dialogue and reconciliation are now key for the future and young generations. He called for accounting for all those still missing from the war, which remains a thorny issue in Serb-Croat postwar relations.

Croatia joined the European Union in 2013, but remains one of the weakest economies in the bloc, partly still because of the war.