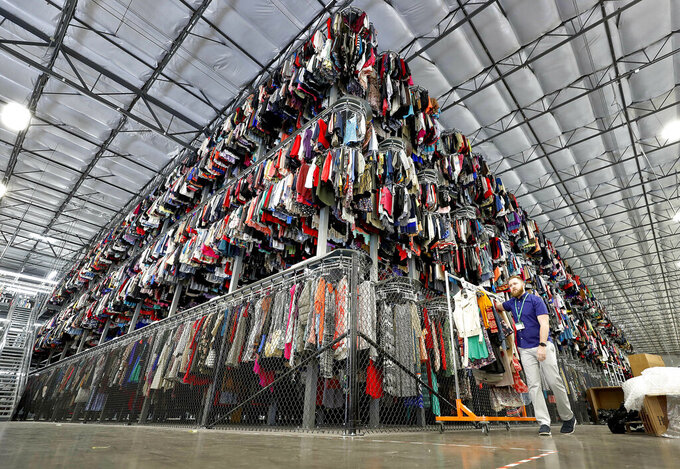 FILE - In this March 12, 2019, file photo thousands of garments are stored on a three-tiered conveyor system at the ThredUp sorting facility in Phoenix. Shares of ThredUp rose 30% in their stock market debut Friday, March 26, 2021, reflecting investor enthusiasm for the online marketplace for second-hand fashion goods. (AP Photo/Matt York, File)

The stock market debut followed strong investor enthusiasm for Poshmark Inc., whose stock more than doubled to $101.50 valuing the company at $7.4 billion in its showing on Jan. 14. However, Poshmark's shares have come down more than 60% since then.

Late Thursday, ThredUp's initial public offering of 12 million shares was priced at $14 apiece, the high end of its estimated range of $12 to $14, according to a statement by the company. That raised about $168 million before underwriting fees. The shares, opened at $18.25 late Friday morning on the Nasdaq Global Select Market under the symbol “TDUP." Shares closed at $20, giving the company a valuation of roughly $1.85 billion.

“I am thrilled with how the stock is being received, but it’s just one day and we have great years of opportunity in front of us," said James Reinhart, the co-founder and CEO of ThredUp, during an interview with The Associated Press Friday.

Reinhart said that the proceeds from the initial public offering will be used to invest in software at its facilities, while expanding beyond the U.S. to possibly Europe.

ThredUp's debut comes as the resale market has remained resilient even during the pandemic, benefiting from shoppers' accelerated shift online and customers' steadfast focus on second-hand goods as they become more conscious about the environment. The total resale market reached $28 billion in 2019 and should increase to $64 billion by 2024, according to research from GlobalData commissioned by ThredUp.

ThredUp, whiich is based in Oakland, California and was founded in 2009, calls itself a “managed" marketplace, for sellers, including managing pricing, merchandising, fulfillment, payments and customer service. With this model, it believes it attracts high-quality supply without directly spending money to acquire sellers.

ThredUp sellers can order a clean out kit, fill it and return it using the company's prepaid label. ThredUp then takes it and gets it ready for resale. In comparison, Poshmark is a social marketplace where users buy and sell directly with each other and interact.

ThredUP and other third-party resale sites also face increasing competition from brands starting their own resale sites. Andy Ruben, CEO of Trove, which powers the resale business for such iconic names as Levi's, Patagonia and Eileen Fisher, believes that every brand in the next five years will have its own resale business. He says that 60% of customers who buy used brands are new customers: a good percentage of those end up buying new items from that brand in the next 12 months.

“This is an incredible tool for every brand right now," Ruben said. He noted that many brands are watching how Poshmark and ThredUp fare as public companies.

Since its founding, ThredUp, which features a diverse array of labels from Gucci to Gap, has processed more than 100 million unique secondhand items from 35,000 brands across 100 categories. Its facility has capacity to hold up to 5.5 million items and process up to 100,000 a day. As of Dec. 31, it had 1.2 million active buyers and 428,000 active sellers. The company also has partnerships with 21 retailers including Walmart.

Reinhart declined to offer AP a specific timeline for when ThredUp will be profitable but he said the “market opportunities are huge."