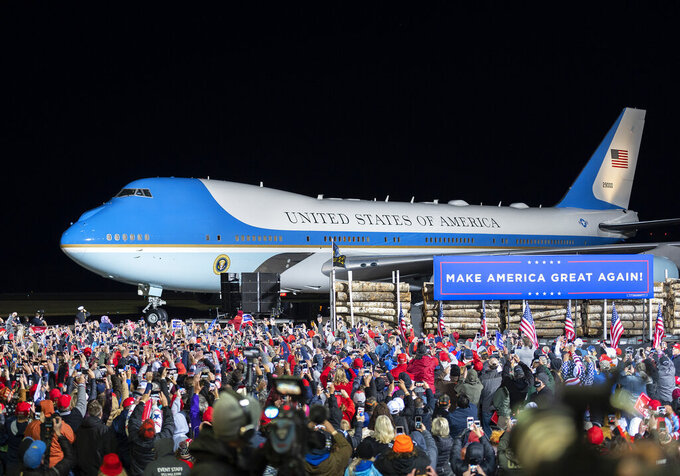 MINNEAPOLIS (AP) — Three Minnesota congressmen and a U.S. Senate candidate who flew on Air Force One with President Donald Trump shortly before he tested positive for the coronavirus moved quickly to get tested Friday, as did other political figures who came close to the president during his visit to Minnesota this week.

South Dakota Gov. Kristi Noem also crossed paths with Trump on Wednesday when she attended a Minneapolis-area fundraiser. Spokesman Ian Fury said Noem was “not a close contact” of Trump or anyone else who tested positive.

About 40 people attended the fundraiser, Minnesota Republican Party Chairwoman Jennifer Carnahan told Minnesota Public Radio News. The $200,000-per-couple fundraiser was held at the sprawling Lake Minnetonka home of Marty Davis, the president and chief executive of Cambria, which manufactures quartz countertops. Davis did not immediately respond to messages from The Associated Press.

“The event site was professionally cleaned and sanitized prior to the event,” Republican National Committee spokeswoman Mandi Merritt said in an email. "The White House Medical Unit and U.S. Secret Service evaluated all attendees in order for them to gain access to the event. Attendees tested negative for COVID-19 on the day of the event, completed a wellness questionnaire, and passed a temperature screening. Every guest was at least 6 feet from the president at all times.”

Republican U.S. Reps. Tom Emmer, Jim Hagedorn and Pete Stauber flew with the president to and from his rally in Duluth on Wednesday night. Hagedorn, who is being treated for kidney cancer, posted a photo of the three of them on his Facebook page. All three said Friday afternoon that their test results came back negative.

GOP Senate candidate Jason Lewis, a former congressman, was part of the greeting committee at Minneapolis-St. Paul International Airport when Trump arrived Wednesday afternoon, along with Minnesota Senate Majority Leader Paul Gazelka, his wife Maralee and House Minority Leader Kurt Daudt. Lewis also accompanied Trump to Duluth on Air Force One. They all stood near Trump on the tarmac as they spoke and posed for pictures for about five minutes, but did not shake hands, according to Daudt and Lewis.

None of them wore masks at the time, video of the arrival showed. All four of them got tested Tuesday in preparation for Trump's visit and came out negative.

Lewis went ahead with a busy day of virtual events Friday, including a debate with incumbent Democratic U.S. Sen. Tina Smith. He said in an interview that he felt fine and that he's already been tested four or five times in the last month because Trump and Vice President Mike Pence each have visited Minnesota twice in the last month.

Lewis said he was advised to wait a day or two to get tested again because the virus might not show up right away due to its incubation period. He said he would self-quarantine at least until he gets his test results back, “just to play it safe,” and then probably hit the campaign trail again.

Neither Lewis nor the three sitting congressmen attended the fundraiser. Lewis said they waited together in a conference room on Air Force One, “watching some ball games and getting caught up" until the short flight to Duluth.

“As I recall, the president came to the doorway once and just said ‘Hey guys, how’s the trip? You having a good time? Good. Let's go get ‘em,' A little pep talk. It couldn't have been more than 30 seconds," Lewis said. He added that they were probably 20 feet behind behind Trump in the hallway before the president walked down the stairs in Duluth and that none of them joined Trump on stage, as they were kept in a holding area.

Daudt and Gazelka both said they were getting retested and would self-quarantine.

U.S. Rep. Ilhan Omar, a Democrat and a frequent target of Trump's, criticized him sharply for what she called “actively spreading a deadly virus.” Omar, who said earlier this year that her father died of COVID-19, said in a statement that she wouldn't wish it on anyone. But she criticized Trump for going unmasked in Minnesota this week, saying he exposed hundreds of people in a state where cases are rising.

Members of the Davis family, which hosted the Trump fundraiser, have been entrepreneurs for decades, starting in butter and expanding into cheese and then quartz. Including Marty Davis' father and siblings, they came in at No. 149 on Forbes’ list of America’s richest families, with an estimated net worth of $1.7 billion.