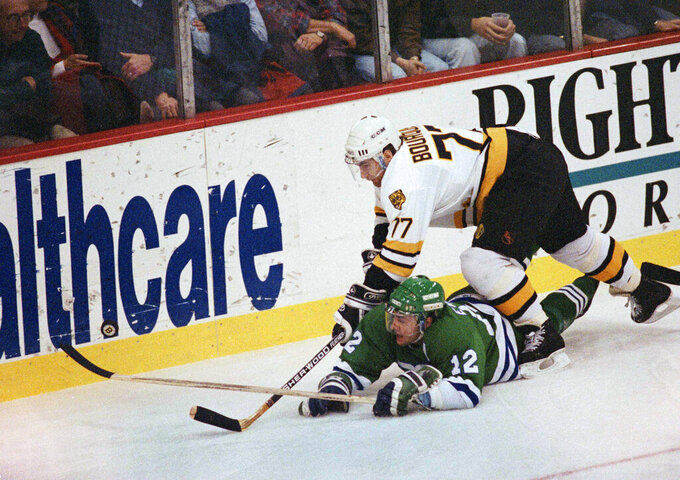 FILE - In this Dec. 13, 1990 file photo, Boston Bruins defenseman Ray Bourque (77) reaches over the back of Hartford Whaler Dean Evason (12) trying to get to the puck behind Boston's goal during first period action in the Boston. The NHL hasn't had best-of-five playoff series since 1986. That's changing for this year with the league expanding to 24 playoff teams as part of its restart. The qualifying round will feature 16 teams facing off in best-of-five series to determine who moves on. (AP Photo/Stephan Savoia, File)

Fans counted down the seconds to the final buzzer, “Brass Bonanza” played over the speakers at Hartford Civic Center and Whalers players Dave Tippett, Joel Quenneville and Dean Evason celebrated a three-game sweep of the Quebec Nordiques.

It was 1986 and one of the final NHL playoff series of its kind. The league this summer holds its first best-of-five playoff series in 34 years, and Tippett, Quenneville and Evason are among those involved in some capacity who know from personal experience what to expect.

“You have to be ready for the grind,” said Tippett, now coach of the Edmonton Oilers. “In a unique situation like this, you’re going from not playing to playing playoff-style hockey, so you’ve got to embrace the grind mentally, physically.”

This is a different kind of grind after four-plus months off the ice because of the coronavirus pandemic. The champion could need 19 wins — not the 15 from decades past — to lift the Stanley Cup. Sixteen teams will play eight best-of-five qualifying round series to determine who moves on to face the league's best from a truncated regular season.

Tippett's Oilers face the Chicago Blackhawks, whom Quenneville coached to three Cup titles from 2010-15. Quenneville's Florida Panthers face the New York Islanders, whose associate coach, Lane Lambert, played in a five-gamer with Detroit in 1984. And Evason's Minnesota Wild face the Vancouver Canucks, managed by Jim Benning, who went through one with Toronto in 1983.

These expanded playoffs have plenty of links to that past, which is plenty evident in Quenneville's trademark white mustache.

“It’s going back just a couple years ago,” Quenneville quipped. “It’s going way back. Back in the day when we did have best of five, we played four in five nights and it was right off the bat. That was a heck of a grind. Game 4 it was like, ‘Wow.' Sometimes your legs, you didn’t know if you had them underneath you.”

There will be more time off this year, with series spread out over eight or nine days and no travel because all games are played in one city. But each qualifying round series features one potential back-to-back, a rarity in modern playoffs.

“I think that (players have) got to be a little bit concerned about those knowing that the next day’s the next day,” Quenneville said. “But you’re only playing to win that game that you’re in. So I think that’s the focus in a short series. Momentum is a key. You always talk about doing the right things shift in, shift out, finding consistency in your game."

Evason has preached that mentality to his team since taking over in February. He doesn't want Wild players looking too far ahead.

“End of the day, it’s one game at a time,” Evason said. “When the puck’s dropped in that first game, we want to play the right way and then we’ll figure stuff out after that.”

But what happens when it's too late to turn things around? Eddie Olczyk won and lost one best-of-five series early in his playing career with Chicago and remembers the nerves of being 18 and 19 years old in those moments.

"Game 1 will be absolutely pivotal in those play-ins to try to get to the first round of this tournament," said Olczyk, who is now broadcasting games as an NBC Sports Analyst. “I’m not going to say it’s a must, but I’m going to say it’s an m-u-s and I’m getting ready to cross the ‘t.'"

Carolina coach Rod Brind'Amour understands that urgency despite being drafted two years after the NHL moved to all best-of-seven series. His Hurricanes face the Rangers, whose president, John Davidson, won the only two best-of-five series he played in with New York.

The Penguins, managed by best-of-five seasoned goaltender Jim Rutherford, face the Montreal Canadiens, whose GM Marc Bergevin was a teammate of Olczyk's in Chicago in the mid-'80s. Columbus, whose assistant Brad Shaw played eight games with the 1985-86 Whalers, faces the Toronto Maple Leafs in the other Eastern Conference series.

Out West, Arizona Coyotes coach Rick Tocchet has his '80s Flyers experience to take into a series against the Nashville Predators, managed by David Poile, who oversaw a couple of best-of-five triumphs with Washington. Winnipeg, which faces Calgary, can lean on assistant coach Charlie Huddy, who won a couple five-game series on the way to Stanley Cup championships with the Oilers.

Then there's Tocchet's old Philadelphia teammate Craig Berube with a fresh 2019 Stanley Cup ring on his hand as coach of the St. Louis Blues. His team finished atop the Western Conference and along with Colorado, Vegas and Dallas gets to skip the best-of-five round.

“It’s important obviously to get off to a good start in those,” Berube said. “There’s always an opportunity to lose a couple in a seven-game. You can come back from it. You lose a couple right away in a five-game series, you’re in trouble, probably.”

Washington GM Brian MacLellan, whose Capitals get a bye in the East along with Boston, Tampa Bay and Philadelphia, won and lost a few of those series back in the '80s. He agrees with Olczyk that these playoffs will be wide open and unpredictable — in large part because of how it starts.

“In a short series,” Quenneville said, “anything can happen.”