Tiger Woods now hopeful of having a busy golf schedule 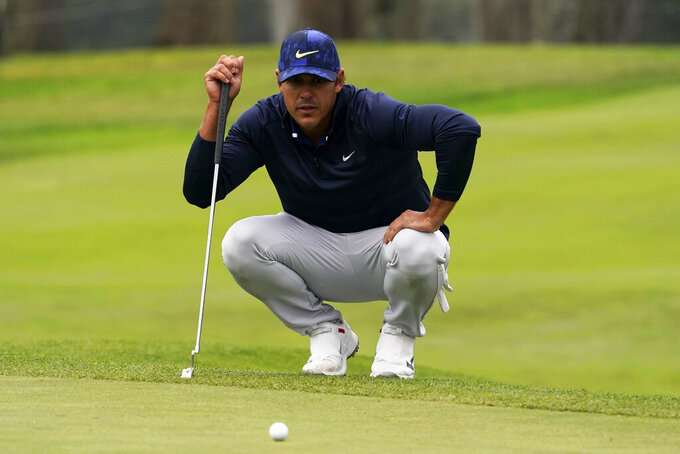 Brooks Koepka lines up a putt on the 13th hole during the third round of the PGA Championship golf tournament at TPC Harding Park Saturday, Aug. 8, 2020, in San Francisco. (AP Photo/Jeff Chiu)

NORTON, Mass. (AP) — Tiger Woods has been careful to manage his schedule to avoid playing too much as he tends to a lower back that has gone through four surgeries.

Now the idea is to play as much as he can.

“The plan is to play four out of five,” Woods said Wednesday after playing the back nine at TPC Boston. “That's the plan.”

It's an ambitious plan for a 44-year-old who tries to avoid playing consecutive weeks, much less the three in a row that might be required for him to reach the Tour Championship for the first time since he won at East Lake in 2018. That's also the last time Woods played three weeks in a row.

The road begins Thursday with The Northern Trust, the first of three playoff events that culminate in Atlanta with the Tour Championship and the $15 million prize to the FedEx Cup champion.

Justin Thomas is the No. 1 seed — the eighth player in eight years to have the top seed starting the postseason — and played the nine-hole practice round with Woods, Ryan Palmer and Harold Varner III.

Woods wasn't sure where he stood in the FedEx Cup. He thought it was No. 28, his position when golf shut down on March 15 because of the COVID-19 pandemic. Having played only twice since golf returned in June, he has fallen to No. 49.

Only the top 70 after this week advance to the BMW Championship at Olympia Fields south of Chicago, and from there the top 30 go to East Lake in Atlanta for the Tour Championship.

That Woods is even as high as No. 49 is remarkable considering he has played only five times this season. That includes the ZoZo Championship in Japan last October, when Woods won for his record-tying 82nd career victory.

There also was a tie for ninth at Torrey Pines, dead last at Riviera and then no golf for three months. Because the tour lost 13 weeks from its schedule due to the pandemic, FedEx Cup points for the playoff events are only triple in value instead of being worth four times as much. That will reduce some of the volatility.

A victory or runner-up finish at the TPC Boston, where Woods won in 2006, would lock up a spot in Atlanta and might afford him the chance to take off next week. Considering he hasn't seriously contended since Japan last fall, odds are he'll have to play three in a row to reach Atlanta.

“That's the way it's going to work out,” Woods said.

And then he would have one week to exhale before the U.S. Open, one of the most grueling weeks in golf at a Winged Foot course that Woods played Monday. The U.S. Open was rescheduled because of the pandemic.

“We're all getting used to the schedule,” Woods said. “This is weird for every one of us.”

That includes Thomas, who joined Woods at Winged Foot on Monday. He spoke of crossing the virtual finish line at East Lake and going on a vacation to decompress. That's in a normal year. Now, there's no stopping.

“That Masters in November is sort of the end of the season,” McIlroy said. “But look, it's a different year. I think we're all just glad that the tournaments are being played and that we're getting them in, that there's going to be a champion. Someone's got to win them. Doesn't matter if it's in April or November. The fact that we have an opportunity is the most important thing.”

McIlroy and Woods are the only players to have won the FedEx Cup twice — Woods in 2007 and 2009 as the No. 1 seed, McIlroy in 2016 and last year when he rallied to beat Brooks Koepka on the final day at East Lake.

Koepka won't have a chance to return. His season has been interrupted by a knee injury and COVID-19, and at No. 97 in the FedEx Cup, he ended his season Wednesday by withdrawing with nagging knee and hip injuries.

Thomas is the No. 1 seed with a healthy lead over PGA champion Collin Morikawa and Webb Simpson.

For those near the bottom of the 125 who qualified, it's imperative to play well this week or go home. That list includes British Open champion Shane Lowry (122) and Jordan Spieth (100). The top players are concerned about their position for East Lake, whether that's Thomas, McIlroy (No. 8) or Dustin Johnson (No. 15), who has not won a FedEx Cup.

“I’m not trying to peak this week. I’m trying to kind of start the upward climb to hopefully be peaking come Monday in Atlanta,” Thomas said, alluding to the Labor Day finish at the Tour Championship.

For those in the middle — like Woods — the first objective is to get to Atlanta. And that means more golf than Woods is used to playing these days.