This time, Pence wears mask as he tours Indiana plant 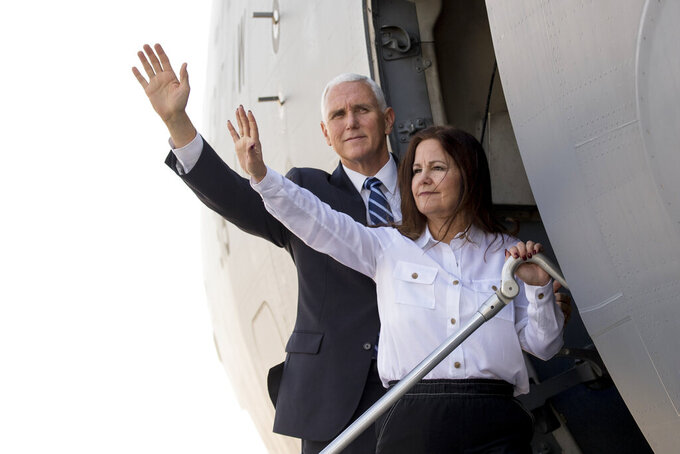 FILE - In this Nov. 23, 2019 file photo, Vice President Mike Pence and his wife Karen Pence board a military cargo jet at Al Asad Air Base, to travel to Erbil, Iraq. (AP Photo/Andrew Harnik)

WASHINGTON (AP) — This time, he wore a mask.

Vice President Mike Pence donned a face covering Thursday as he toured a General Motors/Ventec ventilator production facility in Indiana after coming under fire for failing to wear one earlier this week in violation of Mayo Clinic policy.

The facility in Kokomo had been closed because of the coronavirus but was brought back online in mid-April to produce critical care ventilators for hospitals around the country. General Motors requires workers to wear masks in the plant's production area, according to spokesman Jim Cain.

Pence removed the mask, however, for a roundtable with top officials, including General Motors CEO Mary Barra and Ventec CEO Chris Kiple. None of the participants wore face coverings.

Pence's visit to the factory came hours after his wife, Karen Pence, defended her husband's decision to not wear a mask during a Tuesday visit to the Mayo Clinic in Rochester, Minnesota.

Mrs. Pence told Fox News Channel that he had been unaware of the hospital’s coronavirus policy during the visit and that the vice president has been following the advice of medical experts. Pence, like other senior White House staff, is tested for the virus at least once a week.

“As our medical experts have told us, wearing a mask prevents you from spreading the disease. And knowing that he doesn’t have COVID-19, he didn’t wear one," Mrs. Pence said, adding that it “was actually after he left Mayo Clinic that he found out that they had a policy of asking everyone to wear a mask.”

“So, you know, someone who's worked on this whole task force for over two months is not someone who would have done anything to offend anyone or hurt anyone or scare anyone,” she said.

The Mayo Clinic had earlier tweeted — then deleted — that it had informed the vice president of its "masking policy prior to his arrival.”

The Centers for Disease Control and Prevention recommends that Americans wear cloth face coverings in public settings where other social distancing measures are difficult to maintain, such as in supermarkets, especially in areas of significant community-based transmission.

President Donald Trump has repeatedly expressed discomfort about mask-wearing, saying he did not intend to wear one when the CDC's recommendations were unveiled. But he said Thursday that he would be open to wearing one when he travels to Arizona next week.

“I'm going to have to look at the climate,” he said, telling reporters, “I'd have no problem wearing a mask.”

Still he queried reporters about whether it would be appropriate to wear one while delivering a speech.

“Should I speak in the mask?” he asked. "You're going to have to tell me if that's politically correct. I don't know. If it is, I'll speak in a mask.” Trump's has openly flouted political norms and taken pride in his political incorrectness.

Footage of Pence’s tour of the Mayo Clinic earlier this week showed him bare-faced as he met with an employee who had recovered from the virus, even though everyone else in the room appeared to be wearing one. He also participated in a roundtable discussion in which every participant, from Food and Drug Administration chief Stephen Hahn to the state's governor, wore a mask except for him.

Pence explained his decision that day by stressing that he has been frequently tested for the virus.

But even with a mask, Pence would have been able to look health care workers in the eye because one only covers the nose and mouth.

Minnesota Gov. Tim Walz, a Democrat who wore a mask while he accompanied Pence on his visit to the Mayo Clinic, said he appreciated seeing that Pence was wearing a mask on his trip to Indiana on Thursday.

“The simple gesture of wearing that mask in public goes an awful long ways,” Walz said.

People who enter the White House complex have their temperature taken, and those who will be in close proximity to the president and the vice president are given rapid COVID-19 tests to ensure they're not infectious.

Senior staff also are given tests on a rolling basis so that infections are quickly detected.

Associated Press writers Kevin Freking in Washington, Steve Karnowski in Minneapolis and Tom Krisher in Detroit contributed to this report.