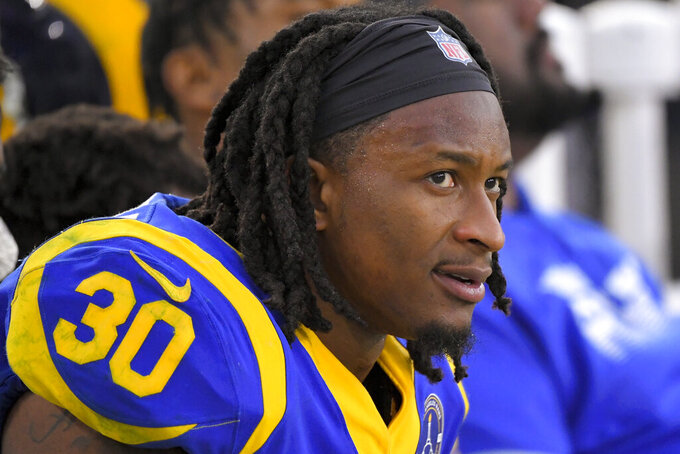 FILE - In this Dec. 29, 2019, file photo, Los Angeles Rams running back Todd Gurley sits on the bench during the second half of an NFL football game against the Arizona Cardinals in Los Angeles. Gurley has passed his physical, clearing the final hurdle for his return to Georgia with the Atlanta Falcons. The Falcons said Tuesday, June 9, 2020, Gurley passed his physical a day earlier in Atlanta. (AP Photo/Mark J. Terrill, File)

ATLANTA (AP) — Running back Todd Gurley has passed his physical, clearing the final hurdle for his return to Georgia with the Atlanta Falcons.

The Falcons said Tuesday that Gurley passed his physical on Monday in Atlanta.

Gurley's $6 million, one-year deal with Atlanta was made official on April 6. Due to the coronavirus pandemic, the NFL didn't allow players to report to their new teams immediately for physicals.

Gurley's physical was notable because he has a history of knee problems, including an injury while a standout for the Georgia Bulldogs. A persistent left knee injury limited his effectiveness late in 2018 with the Los Angeles Rams. He played in 15 games last season.

Quarterback Matt Ryan said Tuesday he recently spent time with Gurley in California and was impressed by the running back.

“I was able to spend a couple of weeks getting to know him a little better, getting a feel for him as an athlete,” Ryan said. “He’s extremely versatile as an athlete. He looked great. He looked healthy and ready to go. I was impressed with that.”

The Falcons expect the 25-year-old Gurley to replace Devonta Freeman, who was released, as the leader of the Falcons’ running attack.

Gurley topped 1,000 yards in three of his five seasons with the Rams. He ran for a career-low 857 yards last season. His average of 3.8 yards per carry was the second lowest of his career.

Gurley impressed Ryan when the two discussed the Falcons' playbook.

“The thing that struck me the most, though, is how smart of a player he is, and his ability to retain information and not have to circle back on things the next day,” Ryan said. “If I told him once how we were trying to work something or a route concept or what we were expecting, he doesn’t forget it. He was back the next day, on top of it and doing it the right way.”

Gurley rushed for more than 1,000 yards in three of his five seasons with the Rams. He ran for a career-low 857 yards with the Rams last season. His average of 3.8 yards per carry was the second-lowest of his career.