Tokyo Olympic Q&A: Few answers yet with about 300 days to go 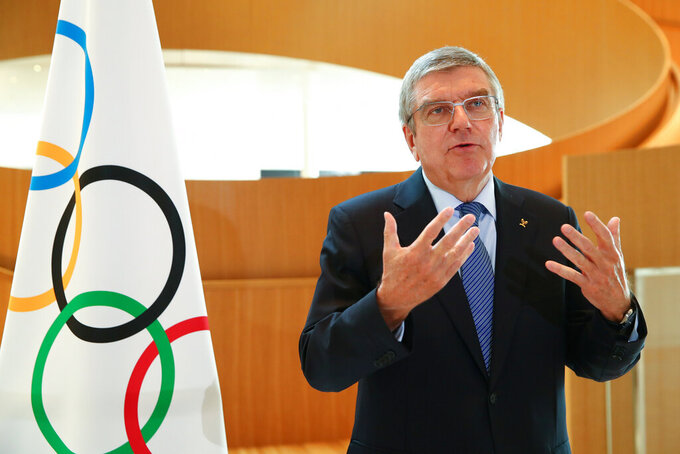 FILE - In this March 25, 2020, file photo, Thomas Bach, president of the International Olympic Committee (IOC), attends an interview after the decision to postpone the Tokyo 2020 Olympic Games because of the coronavirus disease (COVID-19) outbreak, in Lausanne, Switzerland. Bach suggested that the Tokyo Olympics are a moving target. (Denis Balibouse/Keystone via AP, File)

TOKYO (AP) — The postponed Tokyo Olympics are scheduled to open in just over 310 days. But if you're looking for answers about how they'll look — or how the International Olympic Committee and local organizers will pull it off in the midst of the COVID-19 pandemic — you'll be disappointed.

IOC President Thomas Bach said this week that the Tokyo Olympics are a moving target.

“We don't really know what environment we will be in next year," Bach said this week following an IOC executive board meeting. “It’s just too early to give a concrete answer to what will be the final scenario and the final approach.”

All we know is that the IOC and Tokyo organizers say the games will happen, and they are talking that up. According to reports in Japan, much of the optimism is aimed at getting reluctant sponsors on board.

Local sponsors have chipped in more than $3 billion, a big chunk of the local operating budget of $5.6 billion.

Several task forces are meeting on countermeasures against COVID-19. A few preliminary conclusions might come out on Sept. 24-25 when IOC and Japanese officials talk in formal online meetings. But many measures will remain gray late into the year and even into early 2021.

Here are a few questions and answers about the Tokyo Games, which are to involve 11,000 athletes and 4,400 Paralympians.

A: Tokyo Olympic CEO Toshiro Muto said last week no vaccine was needed. A few days later, the IOC member in charge of Tokyo, John Coates, said the Olympics will go on despite COVID-19. And Japan's Olympic Minister Seiko Hashimoto said “I feel we have to hold them no matter what."

Bach said progress on rapid testing and vaccines made him “cautiously optimistic."

“They will not be the silver bullet but they can greatly facilitate the organization of the games," he said.

Bach told a Chinese reporter that the IOC — through the Chinese Olympic Committee — was following vaccine progress at the Chinese pharmaceutical company Sinovac.

“This will of course then not only influence hopefully, the preparations for Tokyo, but also Beijing 2022 (Winter Olympics),” Bach said.

Q: Will there be fans from aboard?

A: Some local fans appear to be more of a given. Baseball and soccer are being played in Japan with limited fans in stadiums, a sign the virus seems under control. Overall, about 1,350 are reported to have died in Japan from COVID-19.

Bach did not offer an answer but acknowledged there was a deadline pending for non-Japanese fans who have tickets, and for organizers who have sold tickets and rely on the income for their budget.

Q: Where is the IOC now with possible changes to so-called Rule 50? It says: "No kind of demonstration or political, religious or racial propaganda is permitted in any Olympic sites, venues or other areas.” Some protests in the NBA in support of Black Lives Matter would not seem to be allowed at the Olympics. The main sticking point is protests on the medal podium.

A: Bach said the IOC's Athletes' Commission is still talking to athletes about how the rule might be amended to give competitors more freedom. Results are expected by the end of the year.

“We have said from the beginning that neither the IOC executive board nor the IOC president will interfere in this consultation," Bach said.

The commission is headed by former Olympic swimmer Kirsty Coventry, an IOC member and ally of Bach.

Mary Harvey, the CEO of the Swiss-based Centre for Sports and Human Rights, said in an email to The Associated Press: “The Centre supports everyone’s right to free expression, and specifically the athlete voice. You don’t have sport without athletes.”

Q: Could an athlete at the Olympics who contracted COVID-19 be quarantined and miss out on the chance at Olympic gold?

A: Bach said there had to be fairness for the athletes, but he still said they could face quarantine.

“If you need a quarantine to ensure a safe environment for all the participants of the games, then you need to go to quarantine," Bach said. "Again, it's a responsibility toward everybody and nobody can just look at him or herself and say: ‘I do not want this’, or 'I don't think this is fair.'"