Too early to call Trump-Biden, Senate races in Michigan 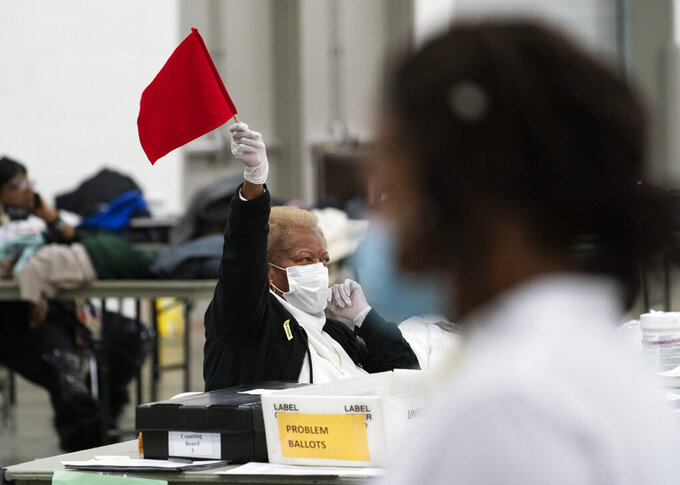 An election inspector waves a flag to call for assistance as ballots are counted into the early morning hours Wednesday, Nov. 4, 2020, at the central counting board in Detroit. (AP Photo/David Goldman)

LANSING, Mich. (AP) — The close race between President Donald Trump and Democrat Joe Biden in battleground Michigan was too early to call Wednesday morning, with many votes uncounted.

The outcome of the state's most competitive Senate contest in 20 years and several closely watched House races was also too early to call. Detroit and Grand Rapids, Michigan's largest cities and Democratic strongholds, were not expected to finish counting until later Wednesday.

“I expect we’ll have a clear picture, if not a final picture, of the unofficial results from Michigan within the next 24 hours," Secretary of State Jocelyn Benson said around 9 p.m. Tuesday.

A look at the election:

Trump smashed the “blue wall” in his first White House bid, narrowly winning Michigan and two other states that had not backed a Republican nominee in decades. The margin of victory in Michigan, about two-tenths of a percentage point, was the closest of any state in 2016.

Michigan was critical this time around, too, and turnout was high. Benson said at least 3.2 million absentee ballots were returned — a record. And about 5.1 million ballots had been counted as of 10 a.m., already breaking the turnout record from the 2008 presidential election.

Biden, determined not to take the state for granted while leading in polls, visited three times in October — including once in the final week — speaking at small events with social distancing due to the coronavirus pandemic. Running mate Kamala Harris campaigned in Detroit on Tuesday afternoon.

Trump campaigned in the state six times since September, including four days in the final week, holding big rallies. He closed his campaign in Grand Rapids on the eve of the election, as he did four years ago.

He focused attention on Democratic Gov. Gretchen Whitmer, who is not up for reelection until 2022. Whitmer took aggressive steps to curb the coronavirus in a state that was a hot spot nationally early on and — after she criticized the federal response — drew criticism from Trump, who in March urged Vice President Mike Pence not to call “the woman in Michigan” and in April tweeted, “LIBERATE MICHIGAN!” He continued to criticize her after authorities announced they had thwarted an alleged plot to kidnap her.

Michigan’s Senate race between one-term Democratic Sen. Gary Peters and Republican challenger John James was too early to call. Peters, eyeing a second term, faced a tough challenge from the Black business executive and combat veteran who was looking to become just the second Michigan Republican to serve in the Senate in more than 40 years. Democrats likely could not afford to lose the seat if they were to flip four to take the majority. A deluge of TV ads reflected it was a heavily contested race.

In the 2018 midterm, Democrats Elissa Slotkin and Haley Stevens flipped Republican-held House districts in suburban Detroit and hoped to keep them. The battleground also shifted westward in 2020.

With five-term Libertarian Rep. Justin Amash's retirement, Hillary Scholten hoped to become the first House Democrat in 44 years and just the second in over a century to represent Grand Rapids — if she could defeat Republican Peter Meijer in the 3rd District.

Republicans who lead the state House said they retained their majority, winning at least 56 seats. It was a blow to Democrats, including Whitmer, who had hoped to be able to set the agenda after 10 years of GOP control. The Republican-led Senate was not up for election.

The Michigan Supreme Court's recent 4-3 decision to strike down a law that underpinned Whitmer's COVID-19 emergency orders put extra attention on the race for two seats. Justice Stephen Markman, author of the opinion, is retiring.

If Chief Justice Bridget McCormack and Elizabeth Welch win, Democratic nominees will be in the court’s majority for the first time since 2010 and could rule on restrictions that were reinstated by the Whitmer administration after the ruling. Republicans nominated Mary Kelly and Brock Swartzle. McCormack was leading, and while Welch and Kelly were battling for second.

McCormack had nearly 32% of the vote, followed by Elizabeth Welch at 19.5%, with 82% of the statewide vote counted.

Michigan voters overwhelmingly adopted two amendments to the state constitution. One changes how royalties paid by developers of state-owned minerals — primarily oil and natural gas — can be spent under a popular program that buys land for public use and supports projects such as construction of trails, playgrounds and boat launches. The other requires a search warrant before police examine a wireless phone or other electronic devices.