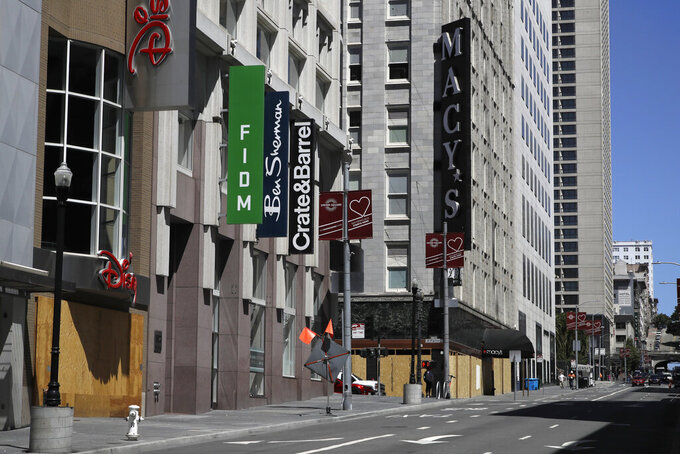 Closed businesses are seen Wednesday, May 27, 2020, in downtown San Francisco. While much of California moves swiftly to reopen things like hair salons under Gov. Gavin Newsom's guidance, the San Francisco Bay Area is continuing to keep the brakes on. Some health officials are questioning whether the state is taking enough time to assess the effects of reopening things like stores before jumping ahead to broader re-openings, risking a surge in infections. (AP Photo/Ben Margot)

SACRAMENTO, Calif. (AP) — Gov. Gavin Newsom has crafted himself as a data-driven governor, letting the facts dictate what has been a largely cautious approach to public safety amid the coronavirus pandemic.

Now some California health officials are wondering if that's still the case as he moves rapidly through his four phases for reopening the state. Among the critics is Sara Cody, the Santa Clara County health officer at the forefront of shutting down the San Francisco Bay Area in mid-March, which served as a model for the state and other parts of the country.

“The state modifications are being made without a real understanding of the consequences of what the last move has been,” she told the county board of supervisors Tuesday. “Making changes too frequently leaves us blind.”

In less than 10 days, Newsom has announced rules allowing 47 of the state's 58 counties to reopen restaurants and malls, religious services and, as of Tuesday, hair salons. He said Wednesday that gyms could be open within weeks. All must be done with modifications.

While Newsom swiftly ordered much of the state to shut down when the crisis began, he's now leaving reopening decisions to local officials, laying out goals counties should hit on testing, tracing and caseloads.

Mark Ghaly, secretary of California's Health and Human Services Agency, said the state guidance is “not a direction or a determination” that a county should allow certain businesses to reopen.

“We aren't in the business of pushing forward counties to open sooner or stay closed longer than they themselves feel they should,” he said. He said the state will keep monitoring indicators to help counties address concerns if they arise.

But the rapid relaxation has raised concern from some health experts and lawmakers given that it can take two to three weeks for a new outbreak to show up in the data. Counties in the Bay Area, like Santa Clara, haven’t gone as quickly as the state. Los Angeles County, the epicenter of the state's coronavirus outbreak, said Tuesday it plans to seek approval from the state to start reopening.

“What we don’t want is a fire burning out of control that we can’t see, so that’s why we’re going to move slowly," Cody said Wednesday.

Only two of the six Bay Area counties that initially made the mid-March decision to lock down, San Francisco and Santa Clara, have seen the rate of cases level off or decline in the last week, one of the requirements under Newsom’s initial directive to begin reopening. Hospitalizations have flattened or decreased in all six counties.

Oakland Mayor Libby Schaaf, a Democrat and Newsom ally, warned against moving too quickly in an interview Wednesday on KGO-TV. Oakland is in Alameda County, which now has more than 3,000 cases, the highest in the Bay Area, and 93 deaths.

“Health has got to take precedence and we’re seeing ample evidence that if we move too quickly we can just have a huge explosion; this thing moves very quickly,” she said. Residents, she said, are “in a county where our health professional has been cautious.”

Dr. David Relman, a microbiologist and immunologist at Stanford Medicine, shared Cody’s skepticism. The criteria around testing and tracing is reasonable, he said, but he questions whether counties are really able to implement the rules and respond to potential outbreaks.

“If something fails we have two problems: One is we’re not going to know for a little while and during that lag time things are worsening without us knowing it,” Relman said. “And the second thing is that you then have to be able to catch back up, to push back and restore stability.”

The Democratic governor on Tuesday said he's confident moving forward because the state is now testing more than 60,000 people a day, has stable rates of positive cases, adequate protective equipment for workers who need it and roughly 3,000 contact tracers to track the spread. That's still short of his goal of 10,000.

Still, he acknowledged: “We are entering into the unknown, the untested," and that the state and counties must be prepared to tighten restrictions again if necessary.

From Sacramento County, which reopened restaurants last week, Sen. Richard Pan, a doctor, says he's a “little concerned with the rapidity with which we're moving.” He was not surprised about the state's move to allow restaurants, shopping malls, child care and other services to open with modifications. But he was surprised to see the governor's quick announcement, less than a week later, that churches and hair salons could reopen.

Other Democrats supported Newsom's move, including Assemblywoman Cottie Petrie-Norris, who represents parts of Orange County, which was also cleared to reopen restaurants over the weekend.

“If everyone follows the rules and the guidelines and the modifications . . . we absolutely can move through this safely and responsibly,” she said.

For most people, the new coronavirus causes mild or moderate symptoms, such as fever and cough that clear up in two to three weeks. For some, especially older adults and people with existing health problems, it can cause more severe illness, including pneumonia and death. California has had nearly 100,000 cases and more than 3,800 people have died.