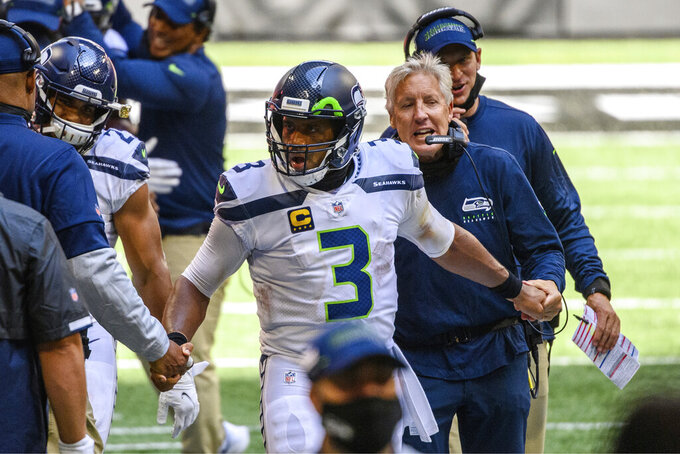 FILE- In this Sunday, Sept. 13, 2020, file photo, Seattle Seahawks head coach Pete Carroll, right, shakes hands with quarterback Russell Wilson (3) on the sideline during the second half of an NFL football game against the Atlanta Falcons in Atlanta. The= Seahawks have had a nasty habit of starting slowly. If their debut at Atlanta last weekend is any indication, Carroll and Wilson have the motors revving from the jump. (AP Photo/Danny Karnik, File)

The Seattle Seahawks have had a nasty habit of starting slowly. If their debut at Atlanta last weekend is any indication, Pete Carroll and Russell Wilson have the motors revving from the jump.

Few teams were more impressive than Seattle as the NFL season began. Baltimore, Kansas City and Green Bay — all 2019 powerhouses — belong in the same conversation, yet those clubs didn't suffer from the malaise that often forced the Seahawks to play from behind.

If Seattle has put such issues behind it, then Cam Newton and the New England Patriots have quite the challenge in a second straight delicious Sunday night matchup.

“Really, I see it playing to our strengths,” Carroll says, and his team showed plenty of strength in most areas in the opener.

“And if you know your philosophy then you have a way to figure out your answers. If you don’t have a good, solid philosophy and a good baseline, then you’re shooting from the hip all the time and you’re going to be up and down, you know?”

All of New England knows that a victory at Seattle, even with the 12th Man silenced by the coronavirus pandemic, would be a strong sign the Patriots are in good hands with their new quarterback.

“This was not the same offense we’ve seen in the past,” Carroll says of the Patriots. “They’ve obviously done a lot of work to the tailor it to him and make sure he’s a big part of.”

Mayfield connected with Odell Beckham Jr. on a 43-yard scoring pass in the first half, and the Browns (1-1) rebounded from an atrocious performance last week in Baltimore. The Bengals are 0-2.

It's noteworthy how the Saints weren't all that satisfied with their opening victory in the Tom Brady-Drew Brees matchup.

Brees has thrown 20 TD passes against the Raiders since his last interception — in 2003. But his 160 yards passing in the opener were the third fewest he's had in a win since joining New Orleans in 2006.

“This place definitely feels like home,” defensive tackle Maurice Hurst said. “I really hope we can do some great things here.”

Saints coach Sean Payton’s first NFL job was with the Eagles in 1997 on a staff that included Raiders coach Jon Gruden.

Slowing the Mahomes/Reid Express is a major challenge, and the Chargers kind of lucked out in beating Cincinnati — which doesn't resemble KC in any fathomable way. The Chiefs have won 11 of 12 in the series, and coach Andy Reid is 13-4 vs. the Chargers. Indeed, the Chiefs are 32-10 vs. division opponents since Reid became coach in 2013.

The Rams won in their debut at SoFi Stadium, so the Chargers have that as inspiration.

Jacksonville, seeking its first 2-0 start in 14 years, has lost six straight in Nashville. Gardner Minshew completed 19 of 20 passes for 173 yards and three touchdowns in the upset of Indianapolis.

Wait! Both of these clubs have winning records?

Well, Arizona shouldn't be a shock, although the way it came back to beat defending NFC champion San Francisco was stunning. The Cardinals are a team on the rise, with stud receiver DeAndre Hopkins already making the folks in Houston shake their heads in wonder about that trade.

Washington's comeback against Philadelphia was a tribute to the coaching acumen and inspiration provided by coach Ron Rivera.

The 49ers will be without star cornerback Richard Sherman (calf) and possibly All-Pro tight end George Kittle, who sprained a knee against Arizona. They will carry a huge chip after blowing the opener and face a Jets squad whose loss at Buffalo team CEO and chairman Christopher Johnson called “a mess.” They are without RB Le'Veon Bell (hamstring).

The 49ers are playing the first of back-to-back games at MetLife Stadium, facing the Giants next week.

Brady isn't used to losses, particularly ones in which he struggles — though defeats are all too common in Tampa. He'll make his home debut against a far less imposing opponent than New Orleans, and the Bucs' defense should offer plenty of support.

Carolina was in position to win Matt Rhule's first game as head coach before the Raiders came back. Panthers All-Pro Christian McCaffrey rushed for two TDs, but Rhule's strange decision not to give him the ball on a fourth-and-1 run was costly.

Both teams come off Monday nighters. The Broncos own the best record against the Steelers of any AFC team at 20-11-1. Denver has won four of the past five meetings.

The Broncos fell late to Tennessee in their opener and have given up the lead in the final 30 seconds six times in head coach Vic Fangio’s 17 games, losing four.

Pittsburgh got a huge performance from backup running back Benny Snell and a lights-out run defense that never let the Giants' Saquon Barkley see daylight. Ben Roethlisberger tossed three TDs in his return from right elbow surgery and needs one more to move past Eli Manning for eighth all time.

The Texans had a long time to stew over their opening defeat at Kansas City — and then had to watch former star wideout D-Hop go wild for Arizona.

Watching the Cowboys lose at Los Angeles had such a familiar look, with an inability to make the decisive plays on both sides of the ball. Mike McCarthy was hired to erase such problems, and the offense was surprisingly lackluster at the Rams despite a wealth of talent.

Atlanta also has a strong collection of players on offense, and new running back Todd Gurley has averaged 127 scrimmage yards per game with three touchdowns against the Cowboys. But the Falcons defense was torn apart by Wilson last week.

This has the look of a lopsided match. The Packers have won seven straight home openers and the Lions under Matt Patricia have lost 10 straight and 13 of 14 overall in their collapse that began last October.

How efficient was Rodgers' offense at Minnesota? The Packers controlled the ball for 41 minutes, 16 seconds, their highest time of possession in a game since 2009.

The Bills’ Josh Allen has thrown for eight touchdowns, rushed for three and thrown one interception in his past three games against Miami. Ten of Allen’s 32 TD passes have come against the Dolphins.

Miami started 11 newcomers last week, including four rookies. The Dolphins are the youngest team in the NFL with an average age of 25.6. But rookie quarterback Tua Tagavailoa was not on the field in the loss to New England.

The Dolphins will allow up to 13,000 masked, socially distancing fans to attend the game.

Philly once again is beleaguered by injuries, particularly on the offensive line. The way the Eagles blew a big lead at Washington in Week 1 was not characteristic of a Doug Pederson-coached team.

“We played great, you know, for 30 minutes,” he said, "and then played as about as bad as you could play for the remaining 30 minutes, and it was just a tale of two halves. Three turnovers, really five, if you count the two turnovers on downs offensively. The eight sacks is disappointing and something you can’t do. Then defensively in the second half, not being able to get off the field like we did in the first half. ... A disappointing way to start the season when there were a lot of high expectations going in to, not only that game, but to start the year.”

LA started the year by opening its $5 billion stadium (minus fans) with an impressive victory over Dallas. All-Pro DT Aaron Donald could have a festival in Philly.

One of the longest rivalries in football — Chicago leads the series dating to 1925 by 34-24-2 — should be renewed on the weekend of the NFL's 100th birthday.

Barkley was held to 6 yards on 15 carries by Pittsburgh in one of his worst games since the Giants drafted him with the No. 2 overall pick in 2018. But he had just 59 yards on 17 attempts against Chicago last year.

The Bears rallied at Detroit after an awful first half. Chicago’s defense — eighth overall in the NFL last season — gave up 426 yards.

Minnesota has lost five straight in the series, its last win coming in 1997. The Vikings are 0-11 all-time in Baltimore and Indianapolis, and haven’t started a season 0-2 since 2013.

Indianapolis has lost six of seven overall and three of its past four home openers. New QB Philip Rivers needs one win to tie Hall of Famer Fran Tarkenton for No. 8 in career (124) and two touchdown passes to become the sixth player in league history with 400.

Team officials have announced up to 2,500 fans will be allowed inside Lucas Oil Stadium.