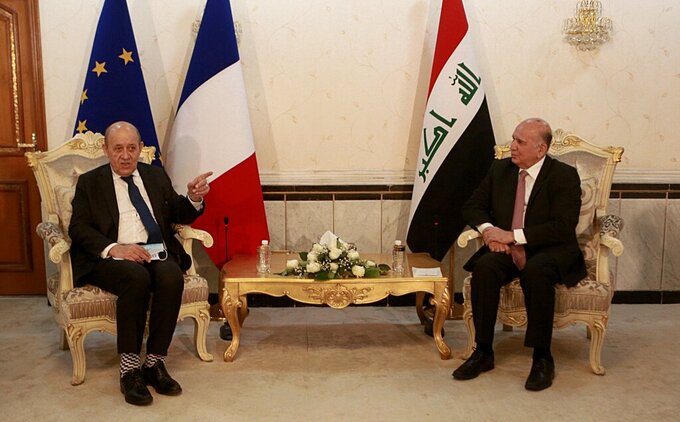 BAGHDAD (AP) — France's foreign minister warned of the persistent threat from the Islamic State group in a visit to Iraq on Thursday, his first official trip outside the European Union since the coronavirus pandemic erupted.

Jean-Yves Le Drian met with his Iraqi counterpart, Fuad Hussein, in Baghdad; the two discussed a broad range of subjects, from IS prisoners of French origin held in Iraqi jails, to the continuing threat posed by IS militants and France's ongoing investment projects in the country.

Le Drian said there were “disturbing” signs of an IS resurgence and that gains made to dislodge the group should not be reversed.

IS-related attacks have increased in parallel with the coronavirus outbreak in Iraq, and as the U.S.-led coalition withdrew from bases across the country's north in a planned drawdown of forces.

Iraqi security forces recently launched a new operation to root out IS sleeper cells in Diyala province, where militants are able to exploit ongoing territorial disputes between the federal government and the semi-autonomous Kurdish region.

France is a member of the U.S.-led coalition that assisted Iraqi forces in defeating the IS in 2017. Recently, the country's contingent of troops were withdrawn from the coalition over coronavirus fears.

Le Drian's visit to Iraq was his first outside Europe in the wake of the coronavirus outbreak. Iraq has seen a recent uptick in cases, with more than 86,000 reported so far, including 3,522 deaths.

Le Drian said France was ready to help cash-strapped Iraq combat the virus by providing medical equipment, according to a statement from Iraq's Foreign Ministry following the French foreign minister and Hussein's meeting.