Top general says no role for military in presidential vote 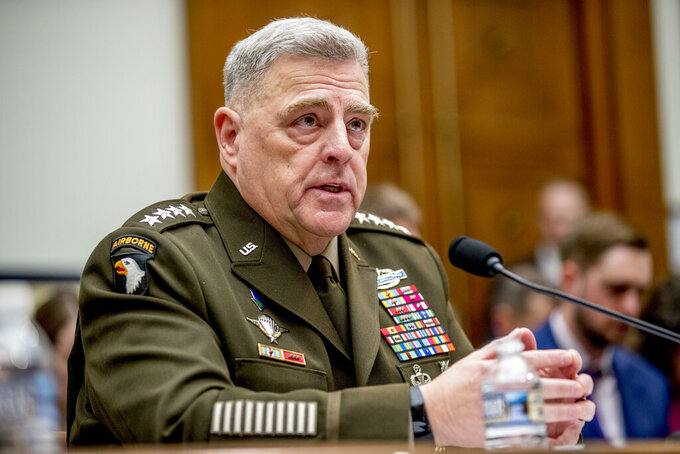 FILE - In this Feb. 26, 2020 file photo, Joint Chiefs of Staff Chairman Gen. Mark Milley speaks at a House Armed Services Committee hearing on Capitol Hill in Washington. The top U.S. military officer is telling Congress that the U.S. armed forces will have no role in carrying out the election process or resolving a disputed vote. The comments from Gen. Mark Milley, chairman of the Joint Chiefs of Staff, underscore the extraordinary political environment in America, where the president has declared without evidence that the expected surge in mail-in ballots will make the vote  “inaccurate and fraudulent,” (AP Photo/Andrew Harnik)

WASHINGTON (AP) — The U.S. armed forces will have no role in carrying out the election process or resolving a disputed vote, the top U.S. military officer told Congress in comments released Friday.

The comments from Gen. Mark Milley, chairman of the Joint Chiefs of Staff, underscore the extraordinary political environment in America, where the president has declared without evidence that the expected surge in mail-in ballots will make the vote “inaccurate and fraudulent,” and has suggested he might not accept the election results if he loses.

Trump's repeated complaints questioning the election's validity have triggered unprecedented worries about the potential for chaos surrounding the election results. Some have speculated that the military might be called upon to get involved, either by Trump trying to use it to help his reelection prospects or as, Democratic challenger Joe Biden has suggested, to remove Trump from the White House if he refuses to accept defeat. The military has adamantly sought to tamp down that speculation and is zealously protective of its historically nonpartisan nature.

“I believe deeply in the principle of an apolitical U.S. military," Milley said in written responses to several questions posed by two Democratic members of the House Armed Services Committee. “In the event of a dispute over some aspect of the elections, by law U.S. courts and the U.S. Congress are required to resolve any disputes, not the U.S. military. I foresee no role for the U.S armed forces in this process.”

Milley's tone reflects the longstanding views of military leaders who insist that the nation's military stays out of politics and that troops are sworn to protect the country and uphold the Constitution.

But the two Congress members, Reps. Elissa Slotkin of Michigan and Mikie Sherrill of New Jersey, said Friday that Trump's recent comments and his efforts to use the military to quell protests have fueled their concerns. The two lawmakers released Milley’s answers.

“These are just prudent questions to be asking given the things that the president has been saying publicly,” said Slotkin, pointing to Trump’s use of the military to clear protesters from Lafayette Square and his suggestions that he may put law enforcement at the polls to make sure voting is conducted professionally. Milley's answers, she said, "demonstrated that the chairman recognized the military’s role in our elections is to essentially stay out; that the military’s role in the peaceful transition of power is to stay out.”

Faced with polls showing he is trailing Biden, Trump last month said it was too early to guarantee he'd accept the election results.

“I have to see. Look ... I have to see,” Trump said on ”Fox News Sunday.” “No, I’m not going to just say yes. I’m not going to say no." The Biden campaign at the time responded that "the United States government is perfectly capable of escorting trespassers out of the White House.”

Trump later suggested that the election should be postponed, since the coronavirus pandemic has made it likely it could take days or weeks to count mail-in ballots. But that idea was immediately slapped down, including by top congressional Republicans, since the election date can only be changed by Congress.

Milley, known to be a student of military and constitutional history, anchored many of his responses in the nation's founding document. Asked if the military would refuse an order from the president if he was attempting to use military action for political gain rather than national security, Milley said, “I will not follow an unlawful order.”

Sherrill, a former Navy helicopter pilot, said, “this is personal for me.”

The attorney general and other Cabinet members should be asked similar questions, she said.

The speculation about the military getting drawn into the election is fueled by Trump’s inclination to use the military as partisan props. He raised alarms — and met resistance from the Pentagon — when he threatened to use the Insurrection Act to use troops for law enforcement during the protests after George Floyd’s death. Defense Secretary Mark Esper publicly said he opposed such a move —- a stand that enraged Trump and nearly cost Esper his job.

The questions were also sent last month to Esper, and the answers were due Thursday. Esper is traveling in Asia this week, and Slotkin said he has not yet responded. Slotkin is a former CIA analyst and senior Pentagon policy adviser and Sherrill served in the Navy for about 10 years.

This is the second time in recent months that Milley has made a public stand against military involvement in politics. In June he used a speech at the National Defense University to express regret for walking with Trump through Lafayette Square in what turned out to be a photo op during public protests after the death of George Floyd.

He said photos of him there “sparked a national debate about the role of the military in civil society.” And he told the military audience, ”we must hold dear the principle of an apolitical military that is so deeply rooted in the very essence of our republic.”