Top Georgia Democrats running for US Senate spar in debate 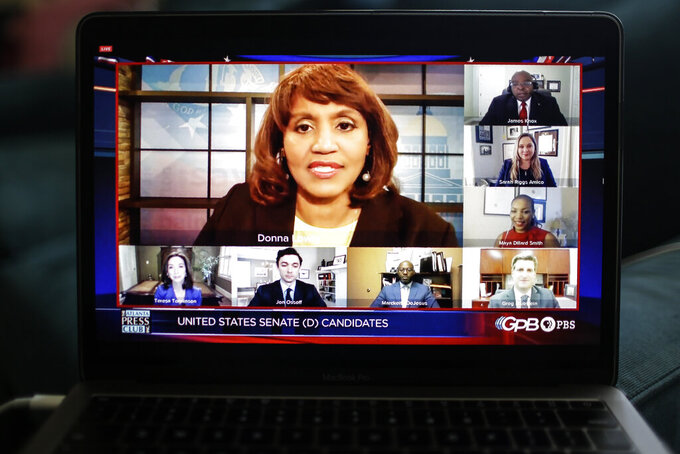 ATLANTA (AP) — Two of the top Georgia Democrats vying to take on Republican Sen. David Perdue in November took hard swipes at each other during a virtual debate Sunday as criticism of the official response to the coronavirus took center stage.

Former Columbus mayor Teresa Tomlinson took an opening shot against former congressional candidate Jon Ossoff, citing a recent internal GOP poll that showed him struggling outside metro Atlanta against Perdue. “People know you, but not enough want to vote for you,” Tomlinson said.

Ossoff fired back by saying that Tomlinson’s “campaign is so weak they didn’t even bother polling your name.”

The evening debate, conducted by online video conference with candidates joining from their homes because of the virus, was awkward at times with coughing and heavy breathing interrupting speakers and, at one point, a dog barking in the background.

“These are different times for a debate,” said Georgia Public Broadcasting host Donna Lowry, as she reminded candidates that their microphones were all on throughout the debate.

Perdue, a former business executive and close ally of President Donald Trump, faces no Republican primary opposition as he seeks a second term.

The contest over Perdue’s seat is only half of the U.S. Senate battle in Georgia this year. Georgia’s other Senate seat, currently held by Republican Sen. Kelly Loeffler, is also up for grabs in November. The twin races have raised Georgia’s political profile, as Republicans look to hold their Senate majority and the White House.

Tomlinson and Ossoff are among a handful of Democrats that Georgia voters will get to choose from in the June 9 Democratic primary. Also running for the right to face Perdue are 2018 candidate for lieutenant governor Sarah Riggs Amico, former ACLU of Georgia head Maya Dillard Smith, Air Force veteran James Knox and another hopeful, Marckeith DeJesus.

A primary runoff, required if no candidate receives more than 50% of votes, would be held Aug. 11.

Ossoff smashed fundraising records during his 2017 special election loss to Republican Karen Handel for a metro Atlanta U.S. House seat, raking in a total of nearly $30 million. He leads in fundraising among Democrats in this race as well, but Tomlinson and Amico have proven themselves to be contenders with considerable support.

The candidates collectively criticized the state and federal response to the coronavirus pandemic during the debate, with several saying that Republican Gov. Brian Kemp has moved too quickly to reopen businesses in Georgia.

“For goodness sake don’t open businesses like massage parlors or tattoo parlors where you have to be physically touching someone else,” Amico said. “I mean there’s a logic gap here for what Brian Kemp has done.”

Kemp has defended his push to reopen the state, one of the most aggressive in the nation, saying that testing capabilities are ramping up and that jobs must be protected where possible.

That focus on the global pandemic comes as both of Georgia's Senate races face dramatically different rules. Unlike the race for Perdue’s seat, the race for Loeffler’s seat won’t be filtered by party primaries and all contenders will face off in November.

Loeffler, who took office in January after being appointed following Sen. Johny Isakson’s retirement, has pledged to spend $20 million of her own money to win the election. But she’s gained a serious challenge from within her own party from Rep. Doug Collins, a four-term congressman popular with the Republican base in Georgia.

Top Democrats in the race for Loeffler's seat include the Rev. Raphael Warnock, pastor of the Atlanta church where the Rev. Martin Luther King Jr. preached; Ed Tarver, who served as U.S. attorney for Georgia’s Southern District under President Barack Obama; and Matt Lieberman, an educator and the son of former vice presidential candidate Joe Lieberman.