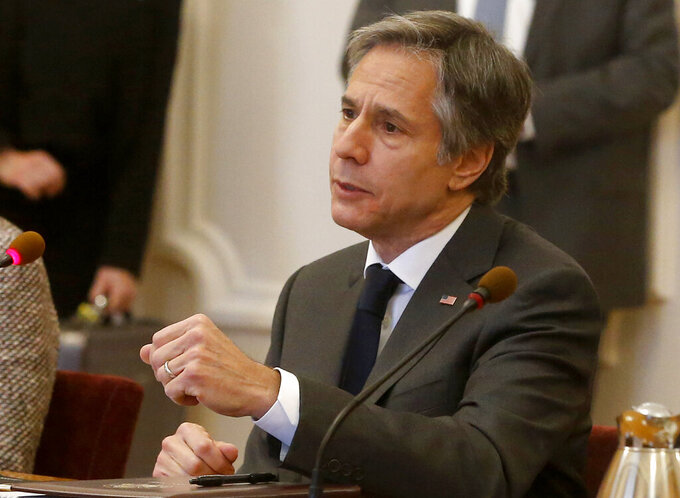 UNITED NATIONS (AP) — The top diplomats from the United States, China and Russia urged strengthened global cooperation on Friday, recognizing the need to tackle growing global challenges and an unprecedented pandemic but sparring over their different worldviews and who’s to blame for threats to multilateralism.

The high-level U.N. Security Council meeting marked the first joint appearance, albeit virtually, by U.S. Secretary of State Antony Blinken and his rival counterparts, Foreign Ministers Sergey Lavrov of Russia and Wang Yi, of China who chaired the session as this month’s council president.

Despite major differences especially on human rights and democracy, all three said they were ready to cooperate with all countries to address international challenges from the COVID-19 pandemic and climate change to ending conflicts and helping people in need.

“Now, some question whether multilateral cooperation is still possible,” he told the council. “The United States believes it is not only possible, it is imperative.”

Blinken said “no single country -- no matter how powerful -- can address the challenges alone” and that’s why the U.S. will work through multilateral institutions to stop COVID-19, tackle the climate crisis, stem the spread and use of nuclear weapons, deliver life-saving humanitarian aid and manage conflicts.

“We will also work with any country on these issues -- including those with whom we have serious differences,” he said. “At the same time, we will continue to push back forcefully when we see countries undermine the international order, pretend that the rules we’ve all agreed to don’t exist, or simply violate them at will.”

Blinken called for all countries to meet their commitments under the U.N. Charter, treaties, Security Council resolutions, international humanitarian law, the World Trade Organization and other global organizations.

The U.S. isn’t seeking to uphold this “rules-based order to keep other nations down,” he said, pointing out that the international order the United States helped to create and defend “has enabled the rise of some of our fiercest competitors.”

Blinken stressed that “human rights and dignity must stay at the core of the international order.”

Governments that insist what they do within their own borders is their own business don’t have “a blank check to enslave, torture, disappear, ethnically cleanse their people, or violate their human rights in any other way,” he said. This was an apparent reference to China’s treatment of the Uighur minority as well as other countries, including Myanmar's actions against Rohingya Muslims.

Blinken also said countries don't respect a founding U.N. principle of equality of all nations when they “purport to redraw the borders of another” country, threaten force to resolve territorial disputes, claim entitlement to a sphere of influence or target another country with disinformation, undermine elections and go after journalists or dissidents.

While he didn’t name any countries, that appeared aimed especially at China’s actions in the South China Sea and Russia’s annexation of Crimea from Ukraine, its attempts to interfere in the U.S. presidential election and its arrest of opposition leader Alexei Navalny and journalists.

Referring to former president Donald Trump's “America First" policy, Blinken said some U.S. actions during that administration “undermined the rules-based order and led others to question whether we are committed to it." He asked the world to judge the Biden administration by its actions, citing examples of its global reengagement including on tackling climate change and COVID-19.

The United States will stand with any country “that upholds its commitment to the order we founded together, and which we must defend and revitalize together," Blinken said. “That's the great test of the moment. Let's meet it together."

China's Wang responded saying “indeed, multilateralism is a sure path for all nations to attain enduring peace and sustained development, and this requires all countries, in particular major countries, to work for it."

“I'm sure all countries would like to see the United States changing course and make a real contribution to practicing multilateralism," he said.

Wang and Russia’s Lavrov both stressed the importance of maintaining the United Nations as the center of multilateralism, which Blinken did not.

Wang recalled the declaration adopted last September by world leaders commemorating the 75th anniversary of the United Nations that “multilateralism is not an option but a necessity."

He called the U.N. “the banner of multilateralism” and said, “We stand ready to work with all parties to bring multilateralism and the U.N. forward ... and jointly build a community with a shared future for mankind.”

He said the more complex global issues are, the greater the need for cooperation on the basis of equality among all countries, “not zero-sum games.”

“No country should expect others to lose,” the Chinese minister said. “Rather, countries must work together to ensure that all come out as winners to achieve security and prosperity for all.”

Wang also called for “equity and justice, not bullying or hegemony,” stressing that international law must apply to all “and there should be no room for exceptionalism or double standards.” And he warned that “splitting the world along ideological lines conflicts with the sprit of multilateralism and is a regression of history.”

Russia’s Lavrov was more specific in targeting the U.S. and other Western nations.

He said the architecture of global governance created at the end of World War II “is being sorely tested.”

“Unfortunately, not all of our partners are guided by the imperative of working honestly to establish genuine multilateral cooperation,” he said.

Unable to advance their “unilateral or bloc priorities within the U.N.,” Lavrov said, “leading Western countries are now trying to roll back the process of establishing a multipolar, polycentric world and trying to restrain the course of history.”

He accused Western nations of developing their own rules, imposing them on everyone else, and taking actions circumventing the United Nations which he called “harmful.”

Lavrov pointed to U.S. President Joe Biden’s call for a summit of democracies, warning that “creating a new special interest club on an openly ideologized basis could further exacerbate international tension and draw dividing lines in a world that needs a unifying agenda now more than ever.”

He also pointed to the French-German Alliance for Multilateralism, saying it should be considered within the U.N. not outside it. And he said the West has established “narrow partnerships” on issues such as cyberspace, humanitarian law, freedom of information and democracy that are already discussed at the U.N. or its agencies.

“I’m saying all of this not to whip up competition and rhetoric and make accusations. I’m simply listing facts,” Lavrov said. “If we are all actually saying we’re in favor of multilateralism, then let’s honestly together try to find ways to establish it justly without attempts to prove anyone’s primacy or to undermine anyone’s rights.”