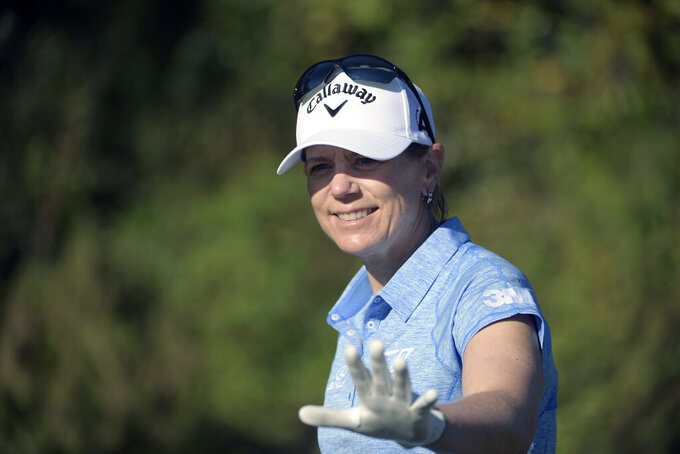 FILE - In this Dec. 7, 2019, file photo, Annika Sorenstam, of Sweden, waves to spectators after teeing off on the first hole during the first round of the Father Son Challenge golf tournament in Orlando, Fla. Sorenstam has started a fund to give $500 grants to 100 players on the LPGA's developmental Symetra Tour. (AP Photo/Phelan M. Ebenhack, File)

The PGA Tour now has a dedicated path for student-athletes from the NCAA, with an emphasis on students.

The tour’s policy board in March approved the plan rolled out this week. It’s called PGA Tour University, and it’s designed for the top NCAA Division I players to have access to either the Korn Ferry Tour or the satellite tours in Canada, Latin America and China once school is out.

Eligible players, however, have to complete at least four years in college.

Over time, this likely won’t apply to the elite in college golf, who usually don’t make it past their sophomore year (Tiger Woods, Justin Thomas, Matthew Wolff) and are good enough to get sponsor exemptions and can head to qualifying options at the end of the season.

But the timing for it given the COVID-19 pandemic couldn’t be better.

Golf has such a short season from being shut down the last three months that the Korn Ferry Tour will not send the top 25 players to the big leagues until 2021, and there will be no qualifying tournaments at the end of 2020. Several college players who contemplated turning pro are going back to school, even seniors who have been granted an additional year of eligibility by the NCAA because of the pandemic.

“By focusing our efforts on players who have completed a minimum of four years, PGA Tour University will not deter from the college game while ensuring its graduates benefit from their maturity and experience,” Commissioner Jay Monahan said in a statement.

The top 15 finishers from the final PGA Tour University ranking list after the college season will get status. The leading five players will be exempt to open, full-field Korn Ferry Tour events until its postseason (typically seven or eight tournaments). They also will be exempt into the final stage of Q-school for the Korn Ferry Tour. The next 10 will have status in Canada, Latin America or China, along with being exempt into the second stage of Q-school.

The ranking list will lean on the World Amateur Golf Ranking, and only the last two years of a player’s college career will count (college tournaments and PGA Tour events, including the three majors for amateurs). However, players won’t show up on the ranking until their fourth year begins. They face a minimum of nine events in their final year, including the NCAA regionals.

The first ranking list is expected to be published this summer leading into the next college season.

The Charles Schwab Challenge at Colonial has a new charity for the return of the PGA Tour, which includes donations to enter a raffle with prizes that range from autographed items to special access at the Presidents Cup and PGA Championship next year.

Colonial is among at least four events that will not have spectators or hospitality on the course upon the season resuming. Both are key elements toward net profits that go to local charities. Instead, the tournament will have “Rise to the Challenge” to benefit the tour’s COVID-19 relief fund and the tournament’s local “Birdies for Charity” fund.

“Though the 2020 Charles Schwab Challenge will understandably operate differently than originally planned, our commitment to the tournament, its fans and the Dallas-Fort Worth community remains unwavering,” said Jonathan Craig, senior executive vice president at the company.

People can contribute starting Monday at www.schwabgolf.com, and winners will be announced online during the tournament. PGA Tour players are supporting the program with digital and social media content from Colonial during the week.

Prizes being offered include a 2019 Presidents Cup flag signed by captains Tiger Woods and Ernie Els; a chance to walk inside the rope with PGA of America President Suzy Whaley next year at Kiawah Island for the PGA Championship; a round of golf at Bandon Dunes with course architect David Kidd; a round of golf with a tour player at Colonial; and custom wedge fitting from Bob Vokey at the Titleist Performance Institute in California.

Annika Sorenstam has devoted time and resources to women’s golf developments over the years, particularly with an AJGA event (Annika Invitational) and junior events in Europe and Australia, along with taking part in the new Women’s Amateur Latin America.

Her latest effort is to help aspiring professionals.

Sorenstam plans to award 100 grants for $500 each toward qualified applicants from the Symetra tour. The deadline to apply is June 12, and grants will be distributed on July 1. The Swede also is accepting donations to the fund, with all of it going to Symetra Tour players.

Juli Inkster won two majors as an LPGA Tour rookie in 1984. She added a third in 1989 at the Nabisco Dinah Shore. And then she had two children, Hayley in 1990 and Cori in 1994. She went 10 years without a major, and nothing tormented her like the 1992 U.S. Women’s Open at Oakmont, where she lost a two-shot lead with two holes to play and Patty Sheehan beat her in an 18-hole playoff.

It was 21 years ago this week that Inkster finally got the prize. She shot 71 in the final round of the 1999 U.S. Women’s Open at Old Waverly in Mississippi and set the 72-hole record to par at 16-under 272. Three weeks later, she won the LPGA Championship to complete the career Grand Slam.

The Mackenzie Tour canceled its season before it could get started.

The PGA Tour’s circuit in Canada had a 13-tournament schedule, the most in its eight year. The COVID-19 pandemic hit when the tour was not quite halfway through its qualifying schools in the U.S. And with border restrictions and mandatory quarantines for entering Canada, the tour was left with few options.

“We’ve weighed all of our options and concluded that it is not feasible to play this summer,” said Scott Pritchard, executive director of the Mackenzie Tour.

The top 60 from the money list in 2019 will remain fully exempt for 2021. The players who made it through Q-schools in Texas, Florida and Alabama will retain status for 2021, while players entered in four other Q-schools (California, Arizona, Florida and Canada) will have their spots reserved for next spring.

With the deadline to enter on Friday, the field for the Charles Schwab Challenge at Colonial already has commitments from the top five players in the world — Rory McIlroy, Jon Rahm, Brooks Koepka, Justin Thomas and Dustin Johnson. McIlroy and Thomas have never played at Colonial. ... Phil Mickelson's first signature golf course opened this week near Calgary. Construction of Mickelson National Golf Club began in 2015. “I'm so proud of this course. As visually intimidating as it appears, you can play it on the ground and the average golfer will have a blast!” Mickelson said on Twitter.

“As long as Tiger calls it his home golf course, that's a testament to Pete Dye and myself.” — Greg Norman, on Sirius XM Radio, on the Medalist Golf Club he helped design.