Toyota profits up amid solid recovery from pandemic fallout 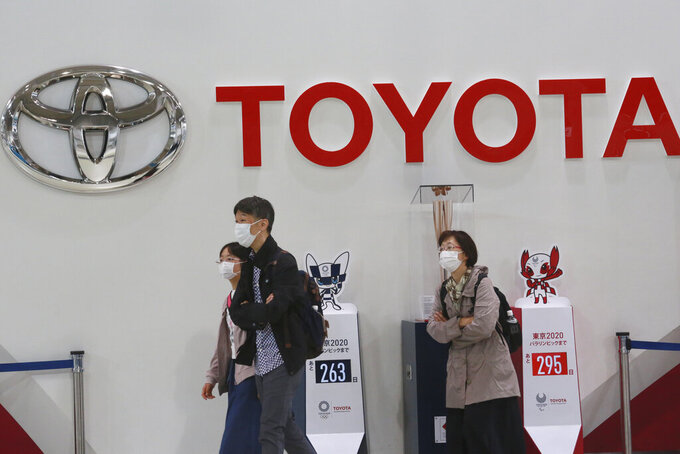 Visitors walk at a Toyota showroom in Tokyo, on Nov. 2, 2020. Toyota reported a 50% jump in its October to December profit Wednesday, Feb. 10, 2021, underlining a solid recovery at the Japanese automaker from the damage of the coronavirus pandemic. (AP Photo/Koji Sasahara)

TOKYO (AP) — Toyota reported a 50% jump in its October to December profit Wednesday, underlining a solid recovery at the Japanese automaker from the damage of the coronavirus pandemic.

Although its business operations are still suffering because of the pandemic, cost cuts and other efforts including online marketing campaigns helped boost its bottom line, Toyota executive Kenta Kon told reporters.

But the latest projection is better than the earlier forecast to sell 7.5 million vehicles.

Global vehicles sales are rebounding in the latest quarter, with Toyota selling more vehicles in the U.S., Japan and Europe, compared to the previous fiscal year.

That’s still lower than the 2 trillion yen profit the maker of the Corolla subcompact, Prius hybrid and Lexus luxury models raked in the previous fiscal year.

Takaki Nakanishi, an equities analyst at Jefferies, sees an “upward trend” for Toyota, which he thinks will grow stronger this year.

The auto industry has suffered from a shortage of computer chips because of the pandemic, but that is slowly being resolved.

Kon said the shortage has not yet affected Toyota’s production, although uncertainties remain.

On a separate issue, when asked what the company thought of recent remarks by Tokyo Olympics organizing committee president Yoshiro Mori, which were widely criticized as sexist, the company referred to a statement from Toyota Chief Executive Akio Toyoda.

Toyoda did not call for Mori’s resignation. But he stressed that Toyota was a corporate sponsor of the Olympics because it supports the Games’ goals of promoting peace and diversity.

“The comment is different from our values, and we find it regrettable,” Toyoda said.