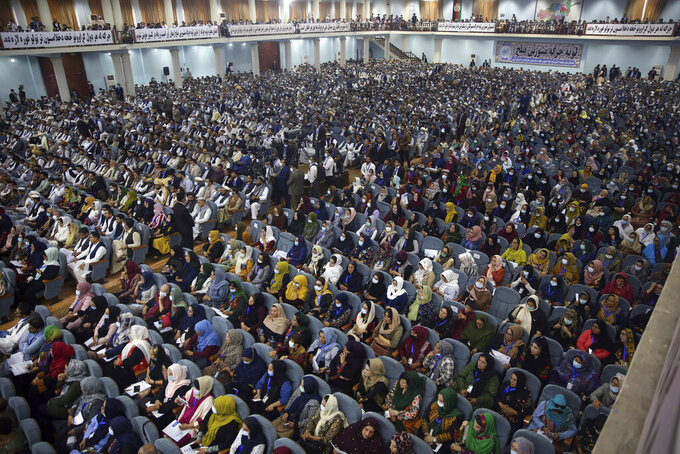 Delegates wearing a protective face masks to help curb the spread of the coronavirus attend an Afghan Loya Jirga meeting in Kabul, Afghanistan, Friday, Aug. 7, 2020. The traditional council opened Friday in the Afghan capital to decide the release of a final 400 Taliban - the last hurdle to the start of negotiations between Kabul’s political leadership and the Taliban in keeping with a peace deal the United States signed with the insurgent movement in February. (AP Photo/Rahmat Gul)

KABUL, Afghanistan (AP) — A traditional council met Friday in Kabul to decide whether to release a final 400 Taliban prisoners, the last hurdle to negotiations between Afghanistan’s political leadership and the Taliban under a peace deal the insurgents signed with the United States earlier this year.

The meeting of the council of elders, known as Loya Jirga, was initially expected to last three days but could end as early as Saturday.

The Kabul-Taliban negotiations are seen as a critical step toward lasting peace in Afghanistan and a roadmap to what the country might look like after decades of war, with the Taliban joining the political mainstream. They are also to decide what constitutional changes would be made in a post-war Afghanistan, and how the rights of women and minorities would be protected.

The negotiations would also determine the fate of the tens of thousands of heavily armed men on both sides of the conflict — the Taliban on one side, and the warlords and armed militias loyal to Kabul on the other.

The Taliban have rejected Friday's gathering in Kabul, claiming it had no legal status. U.S. Secretary of State Mike Pompeo issued a statement late Thursday saying the 400 prisoners had to be released if peace talks with the Taliban were to move forward.

“We acknowledge that the release of these prisoners is unpopular,” Pompeo said. “But this difficult action will lead to an important result long sought by Afghans and Afghanistan’s friends: reduction of violence and direct talks resulting in a peace agreement and an end to the war."

If the council agrees to free the 400 Taliban — the last batch of prisoners whose release the insurgents have demanded under the U.S.-Taliban accord from February — talks between Kabul and the Taliban could begin as early as Monday.

A survey circulated at the Loya Jirga on Friday put the choice bluntly: decide to free the Taliban prisoners and talks could begin on Monday, or refuse and the war would continue. If the Taliban are freed, direct talks could be followed by a lasting cease-fire.

The Loya Jirga, which is expected to cost the cash-strapped Afghanistan $4.5 million, is being attended by several thousand participants even as the Health Ministry earlier this week said as many as half of Kabul's residents have been infected with the coronavirus. The true figures are believed to far surpass the more than 36,900 officially reported cases, including 1,298 deaths.

The Afghan health minister, Jawad Osmani, recently said as many as 10 million people — a third of Afghanistan's population — have been infected.

In his statement, Pompeo said the Taliban had “also committed to significantly reduce violence and casualties during the talks."

Since the U.S.-Taliban deal in February, the Taliban have not attacked American and NATO troops, but have continued to wage war on Afghan security forces. The U.S. and NATO have also begun withdrawing some troops in line with the agreement.

The deal calls on the Taliban to guarantee that Afghanistan will not be used as a staging ground for attacks on the United States or its allies. The withdrawal of U.S. and NATO troops hinges on the Taliban meeting those commitments and not on a positive outcome to negotiations between the Taliban and Kabul's political leadership.

The deal also called on Kabul to free 5,000 Taliban while the insurgents were to free 1,000 government and military personnel.

Afghan President Ashraf Ghani has so far freed all but 400 of the Taliban prisoners, insisting on a traditional council to decide their release, saying their crimes were too serious for him to decide on alone.

At the council on Friday, Abdullah Abdullah, who was made head of the High Council for National Reconciliation to end political infighting in Kabul, took over the leadership of the Loya Jirga from its previous head, Abdul Rasul Sayyaf, a warlord.

Sayyaf — a deeply conservative ally of Ghani’s and an inspiration for the Philippine terrorist group Abu Sayyaf — urged the participants “to not create obstacles to peace," without elaborating.

Ghani told the participants they must decide “one way or another” on the 400 Taliban prisoners.

“It is time to decide,” Ghani said, urging the participants to decide quickly.