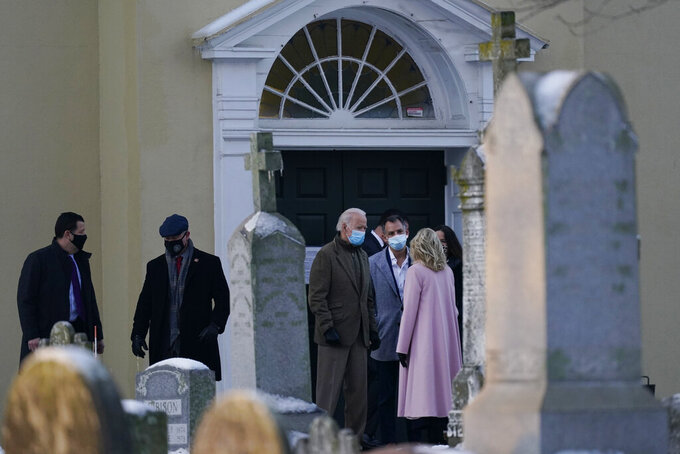 President-elect Joe Biden and his wife Jill Biden pause to talk with Ashley Biden and her husband Howard Krein as they walk from St. Joseph on the Brandywine Roman Catholic Church in Wilmington, Del., Friday, Dec. 18, 2020. Today is the anniversary of Neilia and Naomi Biden's death. (AP Photo/Carolyn Kaster)

WASHINGTON (AP) — President-elect Joe Biden brings more Capitol Hill experience than any president in decades, but his transition has stumbled in ways large and small, exposing the challenges of navigating a Congress that is a different place than when he last served in 2009.

He rolled out an almost all-white national security team when allies were expecting diversity. He filled top posts with familiar Washington hands rather than fresh newcomers. His team clumsily floated some names and retracted others for the Cabinet.

None of the setbacks has been politically devastating. In fact, key Republicans are reaching out for personal calls with Biden, and Democrats are excited about the skilled and savvy professionals poised to join the administration as it battles the COVID-19 crisis and withering economy.

But taken together, the slights and slip-ups of Biden’s interactions with Congress leave the impression his team is misreading the Capitol Hill audience he'll be relying on for legislative outcomes.

And it calls into question one of the incoming president’s most prized attributes — his presumed ability to work with an often unruly Congress. Biden last walked the marbled halls as a senator more than a decade ago. Only one-third of the senators with whom he served remain in office, forcing the president-elect to create new relationships.

“A strong belief that my dad drilled into my head: First impressions are lasting, and you don’t get a second chance to make a first impression,” Rep. James Clyburn, the highest-ranking Black lawmaker in Congress and a top Biden ally, said in an interview Thursday.

Clyburn said people were “raising hell” over what he called the “herky-jerky” rollout of the initial, predominantly white Cabinet picks. Biden's team swiftly adjusted, introducing Black, Latino and Asian American nominees as the president-elect vows to build the most diverse administration in history.

It’s often said in Washington that personnel is policy and Biden's team has built an entire infrastructure around his outreach to Congress, drawing input and counsel from its well of seasoned lawmakers and staff.

Yet the 78-year-old Biden is confronting the expectations of a younger, more diverse Democratic Party hungry for generational change and Republicans hardened by President Donald Trump who are prepared to play hardball as they eye their next campaign for the White House.

Some early developments have set an awkward tone.

In nominating retired Army Gen. Lloyd Austin for defense secretary, Biden smoothed relations by naming the first Black person to lead the Pentagon, one of the highest Cabinet positions and a historic first. But in doing so, he put Democrats in a difficult position of having to flip-flop on granting a waiver of rules limiting military oversight of the department. Many senators voted against such an accommodation for Trump's Pentagon pick.

Biden’s team incensed Hispanic and Asian and Pacific American lawmakers with its handling of Cabinet choices from their communities. He drew eyerolls over tapping former Agriculture Secretary Tom Vilsack to return to the job. Progressives heaped scorn on his naming a budget chief who has been a vocal critic of liberal icon Sen. Bernie Sanders. Sanders is poised to be the top Democrat on the Budget Committee when it considers budget director Neera Tanden's nomination.

A blame-game broke out this week as Biden was rumored to be backing off Democratic Rep. Deb Haaland of New Mexico for the history-making position as the first Native American in the Cabinet. On Thursday, she was selected to be secretary of the Interior Department.

Democrats said the coalition of groups and communities that make up the big tent of the Democratic Party wants not just a seat at the table, but also a say in what happens around that table.

The Biden era promises a turnaround from Trump’s team, which had little experience with the complex rules and relationships that make up the often rambunctious House and insular Senate.

The president is proud of his picks, and the rollout of 19 of what will be two dozen Cabinet-level positions so far already fulfills his pledge for the most diverse in history, his team said.

The incoming president’s allies say Biden is developing not just a Democratic administration after four years of Trump’s White House, but also a roster of familiar and skilled professionals eager to work with Congress to run the government.

Biden's legislative affairs operation on Capitol Hill has enlisted more than a dozen current and former congressional aides to serve as transition liaisons to lawmakers, keeping them informed of developments and open for questions, comments and input.

Senators are getting an early heads-up on some of Biden’s choices for his Cabinet. Once a nomination is announced, lawmakers’ offices are flooded with background materials explaining the choice.

Several Republican senators including Mitt Romney, Lindsey Graham, Susan Collins and Pat Toomey have spoken personally to Biden. Others are taking private meetings with the nominees.

To date, the Biden team has connected with almost the entire 100-member Senate and some 300 members of the House, Democrats and Republicans alike. Its agency review teams have conducted some 150 listening sessions with lawmakers as they prepare to take hold of administrative departments.

The buildout of the new administration is a test not only for Biden but also for his incoming chief of staff Ron Klain, a longtime adviser to powerful Democrats.

Klain’s appointment drew praise across the fractious party, but his performance has not been perfect. The Congressional Asian Pacific American Caucus lawmakers were upset he was a no-show for a long-sought virtual meeting over lack of representation from their community in Cabinet picks.

A first test will come as the Senate begins to consider Biden’s nominees.

Transition spokesperson Andrew Bates said now that leaders of both parties recognize Biden as the president-elect, Americans expect that the Senate will confirm Cabinet nominees “as swiftly as possible.”

Most Republicans on Capitol Hill still have not publicly acknowledged Biden’s victory as Trump pursues his unusual and long-shot bid to overturn the election results.

“Democrats are always lecturing Republican senators about approving future Biden Cabinet nominees even if we don’t agree with them,” Grassley said.

“I want to hear from Democrats why we should not now adopt their standards and vote down nominees based on politics?”

Associated Press writer Will Weissert in Washington contributed to this report.