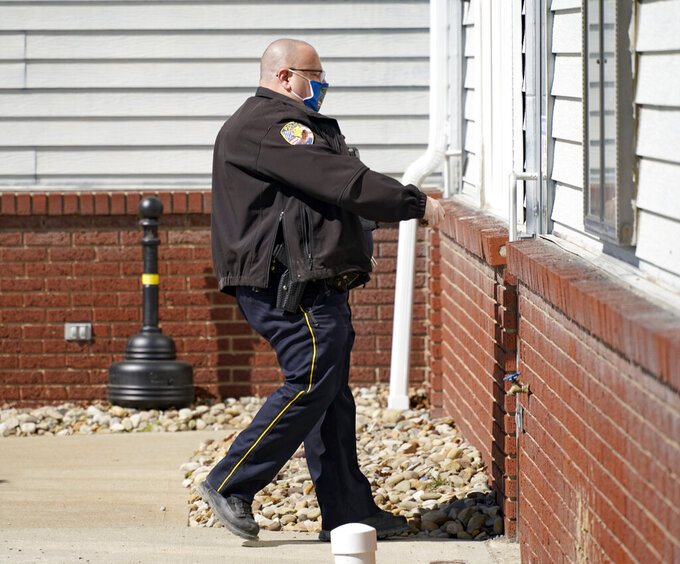 Mount Pleasant Township Police Chief Lou McQuillan returns to his office at the municipal building in Hickory, Pa., on Monday, March 15, 2021. McQuillan, who recently announced he is running for a vacant magisterial district judge post, was listed as one of four administrators of a private Facebook group called the Pittsburgh Area Police Breakroom. Many current and retired officers who are in the group spent the year criticizing chiefs that took a knee or officers who marched with Black Lives Matter protesters, who they called “terrorists,” or “thugs.” (AP Photo/Keith Srakocic)

Many of the deluge of daily posts were jokes about the hardships of being officers, memorials to deceased colleagues or conversations about training and equipment. But over the group’s almost four-year existence, a few dozen members became more vocal with posts that shifted toward pro-Donald Trump memes and harsh criticism of anyone perceived to support so-called “demoncrats,” Black Lives Matter or coronavirus safety measures.

Contacted by the AP, Lincoln Borough Police Chief Richard Bosco said departmental policy prohibited Huschak from talking to the media. He said the officer is known for his service to the community and wasn’t aware that others had posted insults under his post or that things had “gotten out of hand.”

“He understood the concerns and he deleted the post,” Bosco said. “There is and there needs to be a higher professional standard for police, especially when it comes to social media.”

Trieu defended his comment, telling the AP that he was merely advising other officers in the group that, just like community members can complain about officers, they could file a grievance with a dispatcher’s supervisor if they feared for their safety.

Concerns about explicit bias on officers’ social media accounts were renewed in the last year after a summer of protests demanding an end to police brutality and racial injustice in policing and pro-Trump protests in January that led to a violent siege on the Capitol.

The private Facebook page showed embattled officers hostile to criticism and doubling down on policing as it currently exists, with many posts and comments possibly violating some department social media policies that prohibit disparaging comments about race or that express bias or harass others.

Joe Hoffman, a West Mifflin Borough Police officer, posted a criticism of Webster, Massachusetts, Police Chief Michael Shaw, who lay on his stomach on the steps of his station for about eight minutes — a reference to George Floyd dying after being held on the ground by Minneapolis police.

Hoffman did not return requests for comment left with the police department or a phone number listed in his name.

In another post, a now-retired Pittsburgh police officer talked about being stuck in traffic for hours in June 2018 after protesters commandeered a highway days after a former East Pittsburgh police officer shot and killed 17-year-old Antwon Rose as he ran from a traffic stop. After the officer mentioned having his service weapon in the trunk, other officers said he shouldn’t hesitate to use lethal force because he’d be protecting himself, while others said police should use dogs and water cannons to clear the demonstrators, a reference to police tactics during civil rights protests in the ’60s.

During that 2018 protest, two people were injured when Bell Acres Councilman Gregory Wagner attempted to drive through a crowd near PNC Park. After his arrest, members of the Facebook group posted support for his actions, with one retired Pittsburgh police officer writing that Wagner was merely “trying to get away from a hostile, TERRORISTIC crowd.”

Mount Pleasant Township Police Chief Lou McQuillan, who recently announced he is running for a vacant magisterial district judge post, was listed as one of the Facebook group’s four administrators.

McQuillan posted an article in June 2017 about a civil settlement being reached in the police shooting death of Michael Brown in Ferguson, Missouri, remarking on how the amount of the award was determined: “future earnings? lol What about Ofc Wilson? What about his lost earnings? Joke.” Several officers replied that Brown’s earnings would have derived from crimes or welfare checks, with one posting the theme song from “The Jeffersons.”

McQuillan declined an interview request from the AP, instead sending a statement saying, “Of course, I regret the loss of any life. My comments and posts from four years ago were meant to support law enforcement and police officers everywhere. And I believe in law and order.”

Dozens of group members, many retired or no longer in law enforcement, fueled days of transphobic posts about former Pennsylvania Health Secretary Rachel Levine for her role in statewide social-distancing mandates to stop the spread of COVID-19. Levine, who is transgender, has since been tapped by Biden to be assistant health secretary.

The posts referred to Levine as “he” or “it” and called her a “freak” and other names. “Someone needs to shoot this thing!!” one retired officer wrote.

The group’s rules do not explicitly prohibit racist, sexist or otherwise disparaging content, but do threaten expulsion if members don’t agree to privacy.

According to the group’s introduction, “What goes on in here, STAYS IN HERE. We can have discussions, opinions, thoughts, and even rants, but there is to be NO SHARING outside of this page of anything posted here!”

The Pittsburgh-area officers weren’t alone in posting sometimes hostile and disparaging content to social media. In 2019, the Plain View Project released a database of similar posts from officers in eight departments around the country.

The project, founded by a group of Philadelphia attorneys, examined the Facebook accounts of 2,900 active and 600 retired officers, finding thousands of posts that were racist, sexist, advocated for police brutality or were similarly problematic. The group made the database public, saying the posts eroded the public’s trust.

“In our view, people who are subject to decisions made by law enforcement may fairly question whether these online statements about race, religion, ethnicity and the acceptability of violent policing -- among other topics -- inform officers’ on-the-job behaviors and choices,” the project’s founders wrote.

Pittsburgh was not part of the project, but city officials have received a handful of complaints about social media posts by officers, at least two of which were perceived as racist.

Amid the 2018 protests over the shooting of Antwon Rose, Officer Brian M. Martin appeared to express glee at the death of Black Pittsburgh rapper Jimmy Wopo, writing: “I’m still celebrating.” He later pleaded no contest to a DUI after hitting a bicyclist and leaving the scene of the accident while off-duty, and was placed on leave. He withdrew that plea late last week and was found guilty of a lesser charge of careless driving, according to court records.

Pittsburgh’s Office of Municipal Investigations, which investigates complaints against the police and other city employees, reviewed both cases after complaints from the public, but city public safety spokesperson Chris Togneri said he could not discuss the outcome or comment on whether the men were still employed. A spokesperson Monday said Martin no longer works at the department.

Following the complaint against Kristoff, the department revised its social media policy to emphasize that officers may face discipline for online comments, especially those undermining public trust in the force. Some of the smaller police departments around Allegheny County contacted by the AP either did not have social media policies or had policies that were less specific about offenses. Others, like Lincoln Borough, were working on implementing new policies.

“I think that’s really important that the police department has revised its policies to reflect the type of policing they want in their community,” said Elizabeth Pittenger, executive director of Pittsburgh’s Citizen Police Review Board.

Kyna James, a community organizer at the Alliance for Police Accountability in Pittsburgh, said activists calling for police reforms just want officers to be held to the same accountability that citizens are, adding that the existence of the Facebook group and the posts were not surprising.

“You know, that doesn’t make it less upsetting,” James said. “It’s 2021, and it’s a shame that we are still here and we are still dealing with this.”

This story has been corrected to remove a reference to a Pittsburgh officer who was reassigned after a bar brawl. He is not the same officer as Brian M. Martin, who no longer works for the department.