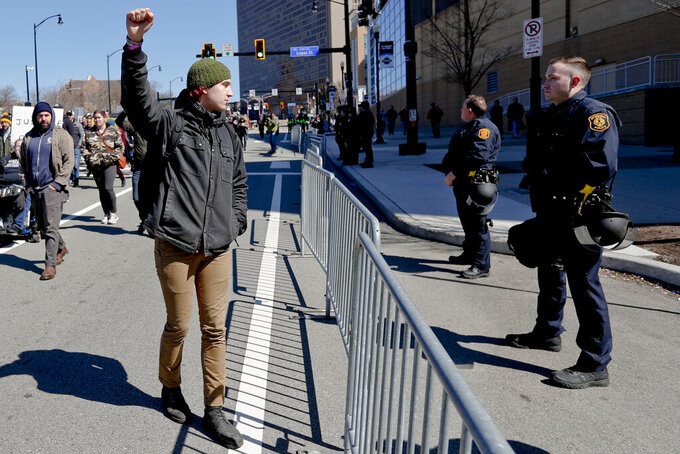 FILE -In this March 23, 2019 file photo, a marcher holds up his fist while staring at police lined up in front of PPG Paints Arena in Pittsburgh during a protest after a former suburban police officer was acquitted of a homicide charge in the on-duty shooting death of Antwon Rose II in East Pittsburgh. In a private Facebook group called the Pittsburgh Area Police Breakroom, many current and retired officers spent the year criticizing chiefs that took a knee or officers who marched with Black Lives Matter protesters, who they called “terrorists” or “thugs.” (AP Photo/Keith Srakocic)

Many of the deluge of daily posts were jokes about the hardships of being officers, memorials to deceased colleagues or conversations about training and equipment. But over the group’s almost 4-year existence, a few dozen members became more vocal with posts that shifted toward pro-Donald Trump memes and harsh criticism of anyone perceived to support so-called “demoncrats,” Black Lives Matter or coronavirus safety measures.

Contacted by the AP, Lincoln Borough Police Chief Richard Bosco said departmental policy prohibited Huschak from talking to the media. He said the officer wasn’t aware that others had posted insults under his post or that things had “gotten out of hand.”

“There is and there needs to be a higher professional standard for police, especially when it comes to social media,” Bosco said.

Trieu defended his comment, telling the AP that he was merely advising fellow officers that they could file a grievance with a dispatcher’s supervisor if they feared for their safety.

Concerns about explicit bias on officers’ social media accounts were renewed after a summer of protests demanding an end to racial injustice in policing and the violent U.S. Capitol siege in January.

The private Facebook page showed embattled officers hostile to criticism, with many entries possibly violating some department social media policies that prohibit disparaging comments about race or harassing others.

Joe Hoffman, a West Mifflin Borough Police officer, denounced Webster, Mass., Police Chief Michael Shaw, who lay on his stomach on his station’s steps for about eight minutes -- a reference to George Floyd dying after being held on the ground by Minneapolis police.

Mount Pleasant Township Police Chief Lou McQuillan, who is running for a vacant magisterial district judge post, was listed as one of the Facebook group’s four administrators.

McQuillan posted an article in June 2017 about a civil settlement reached in the police shooting death of Michael Brown in Ferguson, Missouri, remarking on how the amount of the award was determined: “future earnings? lol. What about Ofc Wilson? What about his lost earnings? Joke.” Several officers replied that Brown’s earnings would have derived from crimes or welfare checks.

In response to the AP, McQuillan said: “Of course, I regret the loss of any life. My comments and posts from four years ago were meant to support law enforcement and police officers everywhere.”

Dozens of group members fueled days of transphobic posts about former Pennsylvania Health Secretary Rachel Levine for her role in statewide social-distancing mandates to stop the spread of COVID-19. Levine, who is transgender, has since been tapped by Biden to be assistant health secretary. “Someone needs to shoot this thing!!” one retired officer wrote.

The Pittsburgh police department has revised its social media policy to emphasize that officers may face discipline for online comments, especially those undermining public trust in the force. Some of the smaller police departments contacted by the AP either did not have policies or had policies less specific about offenses.