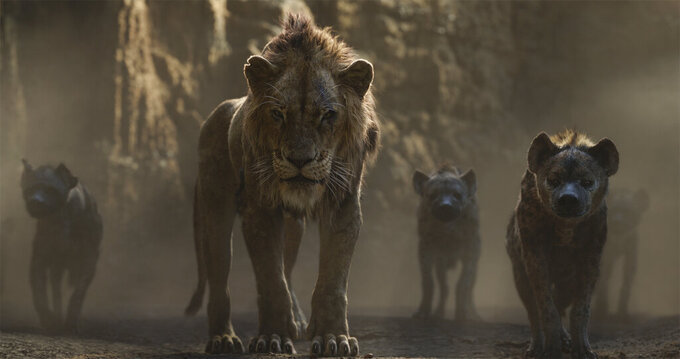 This image provided by Walt Disney Pictures shows a scene from "The Lion King." New LED video wall technology used in making last year’s “The Lion King” and “The Mandalorian” series could become more widespread as Hollywood production ramps back up during the pandemic. Instead of shooting on location with a full cast and crew and navigating stringent social distancing requirements, it allows filmmakers on a studio lot to spread out individual scenes captured virtually using a variety of techniques. (Walt Disney Pictures via AP)

NEW YORK (AP) — New LED video wall technology used in making last year’s “The Lion King” and “The Mandalorian” series could become more widespread as Hollywood production ramps back up during the pandemic.

Instead of shooting on location with a full cast and crew and navigating stringent social distancing requirements, it allows filmmakers on a studio lot to spread out individual scenes captured virtually using a variety of techniques.

Unlike a traditional “green screen,” the actor can see the background and cinematographers can match perspectives and camera parallax to look like a location shoot.

“The Lion King” visual effects supervisor Robert Legato calls the video wall and move toward virtual production a “game changer” that’s being embraced by necessity during the pandemic.

“It is something that was going to happen anyway. It just would have taken longer because there would be no need for it immediately. Some people, you know, are stuck in their ways,” the three-time Oscar winner said.

More than half of “The Mandalorian” scenes were filmed with the technology. Emmy-winning visual effects specialist Sam Nicholson says it represents a “natural evolution” in the Hollywood effects world, where new technologies have been embraced after past crises — including a clampdown on travel after the Sept. 11, 2001 terror attacks.

“We started taking shows like ’E.R, ‘Grey’s Anatomy’ and ‘Walking Dead’ and saying, ‘Look, we don’t have to be on location to actually shoot there.’ It’s easier to bring the location to the production than the production of a location,” Nicholson said.

He believes the pandemic will move Hollywood “from the Cecil B. DeMille era where ‘everything is real’ and going to more of a George Lucas era."

“If you’re a producer, can you really afford to have your entire crew and actors go and be quarantined for two weeks before you start shooting?” he said.

Film production is just one of many industries that have had to adapt so people can go back to work in person.”

“We’ve been helping the ‘Avatar’ folks for a while,” said Dave Hoffman of Blackmagic, an Australian company that makes cameras and video production hardware.

Director Thea Sharrock had to rely on virtual production to finish her latest film, Disney's “The One and Only Ivan,” and she found the process “peculiar.”

“We had one extra element that we had to do with music that we had to deal with via Zoom, which was extraordinary and weird and peculiar not being in the room with people,” Sharrock said.

She added: “Doing what we do is all about collaboration. It’s all about being in a room with people, and that’s how you get the work done. That’s how you push projects forward. So, it’s very, very peculiar.”

Nicholson shares a similar feeling. While he understands these technologies can help resume production during the pandemic, he doesn’t see it as a complete substitute for returning to a normal workflow.

Still, virtual production can provide a viable solution during the pandemic, and perhaps become a useful production technique moving forward.

Actor Joseph Gordon-Levitt, who stars in the new Netflix film “Project Power,” agrees: “It’s about sort of finding a good pairing between the tech you’re using and the story you’re trying to tell,” he said.

Gordon-Levitt’s “Project Power” co-star Rodrigo Santoro has worked on visual effects-heavy productions including the “300″ films and “Westworld.” He sees others in the industry open to adapting.

“The thing with the CGI, especially now during the pandemic, (is) that it’s teaching us so many lessons and so many things about how we can reinvent ourselves,” Santoro said.