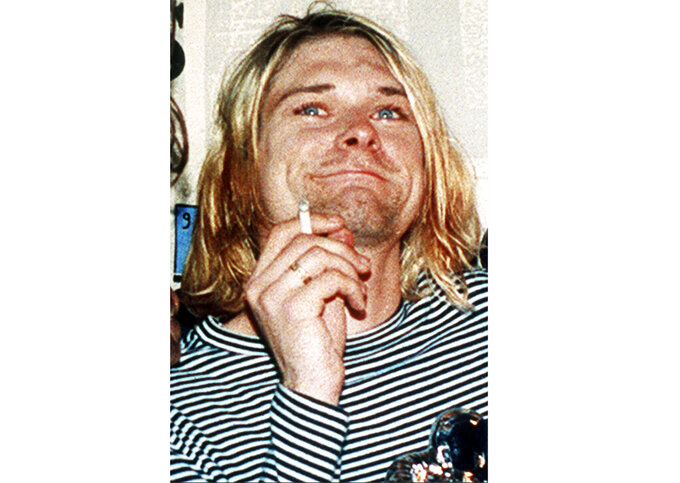 FILE - This 1993 file photo shows Kurt Cobain, the lead singer of the U.S. rock band Nirvana. Six strands of blonde hair from the grunge rock icon are part of a series of Nirvana offerings that also includes a Cobain amp and a rare group-signed blue Stratocaster-style guitar at an online rock ‘n’ roll auction that ends over the weekend.. (AP Photo/Mark J. Terrill, File)

NEW YORK (AP) — Guitars from Eddie Van Halen, Eric Clapton and Aerosmith as well as autographed memorabilia from The Beatles and even strands of hair from Kurt Cobain are some of the highlights of an online rock ‘n’ roll auction that ends over the weekend.

Six strands of blonde hair from the grunge rock icon are part of a series of Nirvana offerings that also includes a Cobain amp and a rare group-signed blue Stratocaster-style guitar. The hair was cut by a friend in 1989 and the minimum bid is $2,500.

The Marshall amp has “Kurt” written faintly in the top right corner and was used by Nirvana during the '90s, as well as while the band filmed its “Live and Loud” video. It was later used by Hole and OPM after Cobain’s death. The minimum bid is $15,000. (A guitar Cobain used for his MTV Unplugged show recently sold for $6 million).

The items are part of a slate of rock items being offered up by Iconic Auction, spanning Elvis to grunge. The auction closes Saturday. A portion of proceeds will benefit Crew Nation, a relief fund for live music touring and venue crews who are facing hardship due to the coronavirus pandemic.

The item with the highest minimum is a collarless, dark blue jacket custom made for Paul McCartney that starts at $25,000. It was worn onstage over a six-night stand at Bournemouth, England’s Gaumont Theatre in 1963.

Tricia Eaton, East Coast consignment director at Iconic Auctions, said the jacket is one of the Beatles’ earliest stage-worn garments ever to come to market and captures the band pivoting from jeans and leather jackets.

There's also a copy of “Sgt. Peppers Lonely Hearts Club Band” signed by McCartney, George Harrison and Ringo Starr, and a sheet of handwritten “Blowin' in the Wind” lyrics signed by Bob Dylan. The album's minimum is $5,000 and the Dylan minimum is $15,000.

Cobain's hair isn't the only hair in the collection. Locks from Jimi Hendrex and John Lennon are also on offer. Among the 70 or so guitars is one signed by Tony Iommi and Ozzy Osbourne from Black Sabbath and starts at $500.