Trial to determine if GEO must pay detainees minimum wage 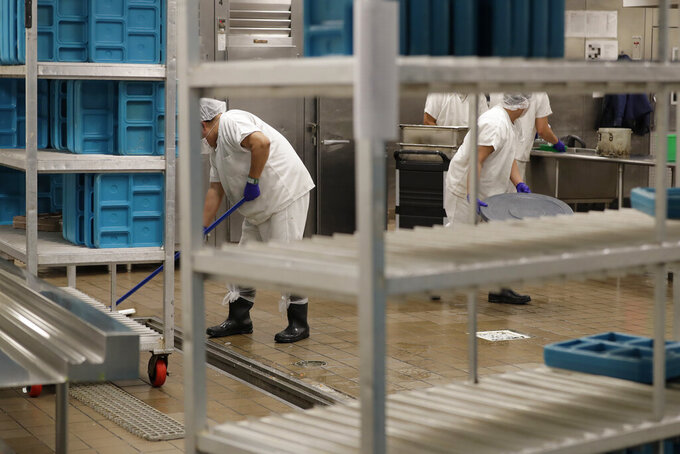 FILE - In this Sept. 10, 2019, file photo, workers are shown in the kitchen of the U.S. Immigration and Customs Enforcement detention facility in Tacoma, Wash., during a media tour. After years of litigation and pandemic-related delays, jury selection is underway in a trial to determine whether GEO Group must pay minimum wage to detainees at its immigration detention center in Washington state. (AP Photo/Ted S. Warren, File)

SEATTLE (AP) — After nearly four years of litigation and pandemic-related delays, a trial is underway to determine whether the GEO Group must pay minimum wage to detainees who perform cooking, cleaning and other tasks at its immigration detention center in Washington state.

Detainees are typically paid $1 per day when they work shifts in the Voluntary Work Program at the for-profit Northwest detention center in Tacoma. The state's minimum wage is now $13.69 per hour.

Attorney General Bob Ferguson and some detainees filed separate lawsuits against GEO in 2017, arguing that the company’s contract with the federal government requires it to follow state and local laws — including Washington’s Minimum Wage Act — and that GEO, one of the nation's largest private detention companies, unjustly profited by paying so little.

Tacoma-based U.S. District Judge Robert Bryan, who has rejected several attempts by GEO to dismiss the lawsuits, consolidated the cases for trial, which he is conducting via Zoom because of the pandemic. By mid-afternoon Tuesday, a jury of nine people had been chosen. Opening statements were expected Wednesday.

“These cases are not about whether the government’s contracting with private entities to operate detention facilities is a good or bad policy,” Bryan told potential jurors Tuesday morning. “These cases are also not about United States’ immigration policy or border issues.”

However, there are political undertones. In 2014, amid a hunger strike by detainees, immigrant rights activists tried to convince the governor's office and the state Department of Labor and Industries that detainees should be paid minimum wage for work performed there.

After reviewing the matter, Labor and Industry officials determined that Washington didn't have jurisdiction over the federal government's detainees for purposes of wage issues, according to public records obtained by GEO and filed in the case.

In 2017, amid a flurry of lawsuits over the new Trump administration's immigration policies, Ferguson reached a different conclusion, saying GEO was exploiting Washington residents.

Trump's Justice Department sought — and failed — to have Washington's lawsuit against GEO lawsuit dismissed, calling it “an aggressive and legally unjustified effort by the state of Washington to interfere with federal immigration enforcement.”

GEO opened the detention center in 2005 and has expanded it twice. It houses people accused of civil immigration violations pending the resolution of their cases, including potential deportation. It can now hold 1,575 detainees, though because of pandemic-related concerns the population recently was about 250.

In a separate effort, the state is now trying to close it entirely. Gov. Jay Inslee signed a law passed by the the Democratic-led Legislature that would ban for-profit detention centers in Washington. GEO has sued to block it.

GEO insists it is immune from the minimum wage lawsuits by virtue of its relationship with the federal government. At any rate, the detainees are not “employees” entitled to minimum wage, it argues.

U.S. Immigration and Customs Enforcement requires private detention facilities to operate work programs for detainees as a way to reduce their boredom and improve their morale, GEO argues. The company doesn't have a choice but to offer the program even if the tasks assigned are redundant or if the detainee lacks skill — “inefficiencies that would never be tolerated in an employee-employer relationship,” GEO argued in a trial brief.

Further, the turnover is “astronomical,” the company's lawyers argued: "GEO does not profit from the (Voluntary Work Program), but rather, is burdened with its implementation and supervision without any tangible return.”

Washington state, however, argues that the federal government requires detainees to be paid “at least” $1 per day; nothing prevents the company from paying more. And while the state's minimum wage law exempts prisoners of government-owned detention facilities, it makes no such exemption for detainees at private ones.

“By relying on detainee labor, GEO avoided the cost of hiring non-detainee workers and unjustly pocketed the savings and resulting profits,” the attorney general’s office wrote in its trial brief.

Further, GEO deprived local residents of jobs they might otherwise have worked, the state says.

The trial could last several weeks. If the jury finds that the minimum wage law applies to GEO, a second phase will be held to determine damages. The detainee lawsuit is a class-action seeking back pay.